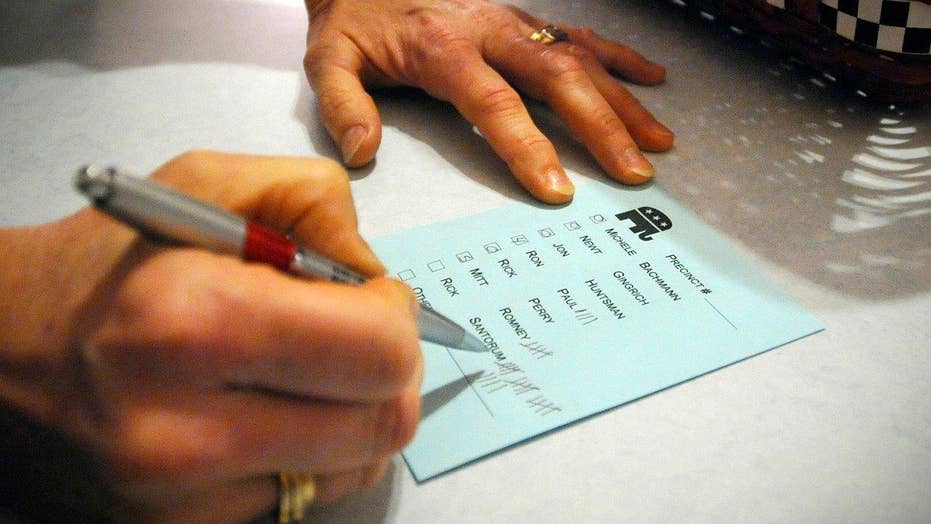 Iowa 101: How the caucuses work

Early Fox News entrance polls for the Iowa caucuses Monday night indicate a stronger-than-expected showing from evangelical voters in the first test of the 2016 campaign cycle -- and their support in the GOP race is split almost evenly among the top three candidates.

Early figures from the Republican contest show evangelicals or those who identify as “born-again” Christians accounted for 62 percent – a number much higher than expected.

Early data for the evangelical vote had the Republican contest in a tight three-way race among Texas Sen. Cruz, Donald Trump and Florida Sen. Marco Rubio.

Cruz picked up 26 percent of the vote, Trump 24 percent and Rubio 21 percent. Retired neurosurgeon Ben Carson pulled in 12 percent of the evangelical vote in those polls.

Early entrance data shows Trump also dominating when it comes to first-time attendees. He was leading the GOP field with 33 percent, followed by Rubio at 21 percent, Cruz at 18 percent and Carson at 10 percent.

Rubio also swayed late deciders with 28 percent of the vote, followed by Cruz at 20 percent and Trump at 14 percent.

On the Democratic side, candidates Hillary Clinton and Bernie Sanders were also locked in a tight battle.

The Iowa entrance poll collects all the same data as exit polls – voter demographics and which candidate they support – but unlike the exit polls, the entrance polls ask who voters intend to support, not who they supported. It’s a key difference – and one that can change.

Democrats, for example, can be persuaded to join another candidate’s group if their candidate does not meet 15 percent.

Early-arriving voters at Republican caucuses also indicated they were deeply unhappy with the way the federal government is working. Four in 10 told The Associated Press said they were angry and half said they were dissatisfied.

Six in 10 Democratic caucus-goers wanted a candidate who would continue Obama's policies, according to the preliminary entrance polling.

Iowa has decidedly mixed results in picking eventual nominees. The past two Republican caucus winners -- former Arkansas Gov. Mike Huckabee and former Pennsylvania Sen. Rick Santorum -- faded as the race stretched on. But Barack Obama's unexpected 2008 victory was instrumental in his path to the Democratic nomination, easing the anxieties of those who worried the young black senator would struggle to win white voters