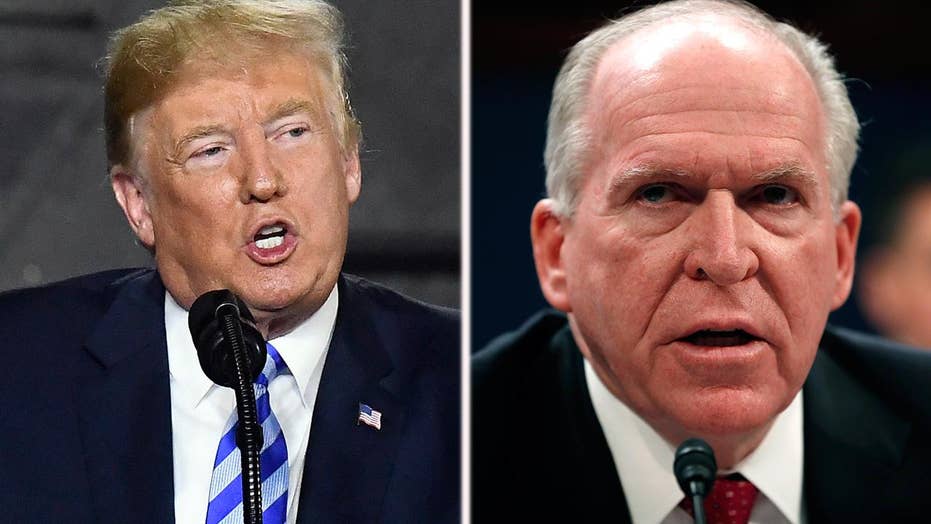 A growing number of top intelligence community veterans from the Obama era are calling out ex-CIA director John Brennan for his attacks on President Trump, even as some take issue with the president’s decision to revoke Brennan’s security clearance.

Meanwhile, Trump on Monday derided Brennan as a “political hack” and dared him to follow through on his threat to file a lawsuit in response.

Brennan has been relentless in publicly attacking Trump. He famously accused the president of “treasonous” behavior and suggested, without evidence, on cable television that the Russians could have compromising information on him.

Some former intelligence veterans – including those who worked with Brennan – are expressing discomfort with Brennan’s comments, saying they are improperly political and speculative.

“Intelligence officers speculate really at our own risk, at their own peril,” Daniel Hoffman, who served as CIA station chief in Moscow during the Obama administration, said in a Monday telephone interview with Fox News. “We shouldn’t be doing that. We deal in facts. We read the facts, the intelligence. And then we make the judgments.”

“And John Brennan – with an emotional outburst – is speculating and is not dealing in the facts,” said Hoffman, a Fox News contributor.

Others are taking issue with how openly anti-Trump Brennan has become, suggesting he inflamed tensions between the White House and the intelligence community.

"I think John's an extraordinary servant of the country, but I think he has been incredibly critical of the president, and I think that has put him in a political place which actually does more damage for the intelligence community -- which is apolitical," retired Adm. Michael Mullen, former chairman of the Joint Chiefs of Staff, said on "Fox News Sunday."

Asked on CNN’s "State of the Union" if he thinks Brennan’s attacks on Trump are an issue, former Director of National Intelligence James Clapper replied, “I think it is.”

"I think John is subtle like a freight train and he’s gonna say what’s on his mind," Clapper said Sunday.

Added Clapper: “John and his rhetoric have become, I think, an issue in and of itself.”

Trump last week revoked Brennan’s security, suggesting it could be the first in a series of revocations for top Obama-era intelligence and law enforcement officials. Brennan has responded to the revocation by calling it “part of a broader effort by Mr. Trump to suppress freedom of speech & punish critics.”

Both Mullen and Clapper -- whose clearance the president is considering stripping too -- have criticized Trump for revoking Brennan’s security clearance.

SPECIAL OPS SHOOT DOWN BRENNAN AND HIS DEFENDERS

Hoffman, who spent almost 30 years in the intelligence community, told Fox News he would have preferred if Trump went through the established norms and talked to the CIA first before revoking Brennan’s clearance. But, Hoffman said of the president, “that’s his choice” and predicted Trump would win the fight.

“Right now, this is about Donald Trump versus John Brennan in a mud bath slugging it out,” Hoffman said. “And I can tell you right now, we all know who's going to win. Donald Trump is a smart guy. He’s no political neophyte. He picked the right guy to deal with on this.”

Meanwhile, Trump on Monday dared Brennan to sue over the revocation.

“I hope John Brennan, the worst CIA Director in our country’s history, brings a lawsuit,” Trump tweeted Monday. “It will then be very easy to get all of his records, texts, emails and documents to show not only the poor job he did, but how he was involved with the Mueller Rigged Witch Hunt.”

Brennan said in an interview on NBC’s "Meet the Press" on Sunday that he is willing to do whatever he can to prevent others from having their security clearances revoked, including taking the president to court.

The president, though, predicted Brennan won’t pull the trigger on a suit: “He won’t sue!”

“Everybody wants to keep their Security Clearance, it’s worth great prestige and big dollars, even board seats, and that is why certain people are coming forward to protect Brennan,” Trump tweeted. “It certainly isn’t because of the good job he did! He is a political ‘hack.’”

Brennan on Sunday said lawyers have approached him on the issue and spoke about obtaining an injunction to prevent more security clearances being revoked.

"If my clearances and my reputation as I'm being pulled through the mud now, if that's the price we're going to pay to prevent Donald Trump from doing this against other people, to me it's a small price to pay," Brennan said. "So I am going to do whatever I can personally to try to prevent these abuses in the future. And if it means going to court, I will do that."