Ratcliffe: China is only country capable of stealing American dream

EXCLUSIVE: The 2020 Intelligence Community Assessment focused on foreign election influence will be delayed, Fox News has learned, amid a dispute among senior intelligence analysts over whether China sought to influence the election.

"This afternoon the DNI was notified by career intelligence officials that the Intelligence Community will not meet the December 18 deadline, set by Executive Order and Congress, to submit the IC’s classified assessment on foreign threats to the 2020 U.S. elections," Amanda Schoch, Assistant DNI for Strategic Communications said in a statement to Fox News.

"The IC has received relevant reporting since the election and a number of agencies have not finished coordinating on the product," Schoch continued. "The DNI is committed to providing this report to our customers expeditiously."

The report was expected to be released by Friday, but sources familiar told Fox News that there is a dispute within the intelligence community over what should be included in this 2020 ICA.

Sources told Fox News that a number of senior intelligence analysts are "adamant" that China sought to influence the 2020 presidential election, while a number of others are downplaying China’s activities surrounding the election.

Some analysts claim that China’s efforts were "minimal" or only plans that ultimately were not acted upon, while others are arguing there is "ample raw intelligence" about China’s intentions and actions.

When asked where Director of National Intelligence John Ratcliffe stands, a senior intelligence official told Fox News that "all that Ratcliffe wants is for the intelligence to be reflected accurately and honestly with regard to China and everything else."

An intelligence official with experience in analytic disputes told Fox News that "proper analytic tradecraft would stipulate that when there are competing views like this, that both views should be captured in the report."

Former acting DNI Richard Grenell seemed to echo that sentiment on Wednesday, tweeting that Ratcliffe is "standing up for career analysts who want their views to be accurately reflected. In other words, fighting to keep intelligence from being politicized."

In October, Ratcliffe and FBI Director Christopher Wray warned that Russia and Iran were attempting to influence the 2020 election. Ratcliffe, at the time, said the intelligence community discovered interference from Iran, saying it was designed to incite social unrest and damage President Trump.

"These actions are desperate attempts by desperate adversaries," Ratcliffe said at the time, noting that intimidating emails were sent to Democrats in battleground states such as Florida, Arizona and Pennsylvania appeared to be aimed at intimidating them into voting for President Trump.

The emails falsely purported to be from the far-right group Proud Boys and warned that "we will come after you" if the recipients didn’t vote to reelect Trump.

ODNI 'PRIMARILY CONCERNED' WITH CHINA, RUSSIA, IRAN AHEAD OF 2020 ELECTION

China was not mentioned during that briefing.

A source familiar, though, reiterated Schoch’s comments, saying that intelligence reporting "continues to come in."

While Ratcliffe and Wray did not specifically mention China during their October press conference, Director of the National Counterintelligence and Security Center Bill Evanina has warned since the summer that China, Russia and Iran were seeking to "compromise" the election. 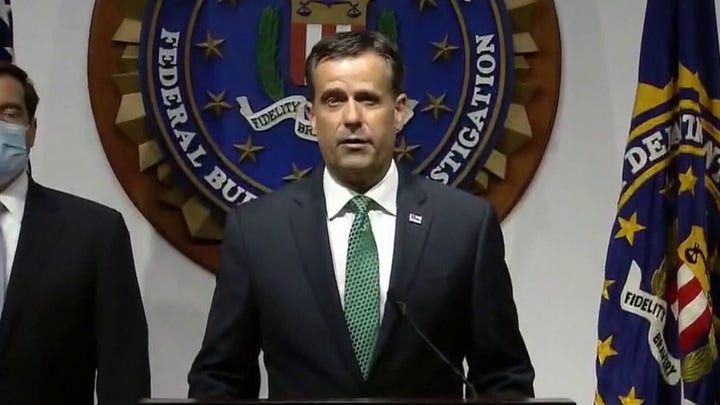 Evanina, in June, said that China was working to influence and shape policy in the U.S. In August, Evanina went further, adding that Beijing would prefer a Trump loss because Chinese officials viewed him as "unpredictable," and had been "expanding its attempt to influence the General Election and shape U.S. policy, by pressuring political figures Chinese officials view as opposed to China's interests."

At the time, Evanina also assessed that Russia was using "a range of measures to primarily denigrate" Biden. Evanina also said that Iran sought to focus on online influence, such as spreading disinformation on social media, saying their efforts were driven by a "perception that President Trump’s reelection would result in a continuation of U.S. pressure on Iran in an effort to foment regime change."

Meanwhile, Ratcliffe, in an exclusive interview with Fox News earlier this month, warned that China is the "greatest national security threat that we face."

RATCLIFFE URGES BIDEN TO 'BE HONEST' ABOUT CHINA THREAT, WARNS AGAINST 'POLITICIZING INTELLIGENCE'

"The intelligence is so clear that China is our greatest threat," Ratcliffe said. "People that equate other things, or say, oh, you know, Russia is a greater threat, they are politicizing intelligence."

He added: "I am hoping now that the election is over, now that people have voted, and if there is a Biden administration, that they will get past politicizing intelligence and be honest about China and acknowledge that China, and China alone is the greatest national security threat that we face."

Biden, last month, announced his appointment of Avril Haines as nominee for director of national intelligence.

Haines, who would be the first woman to serve as DNI, was a former deputy director of the CIA and former deputy national security adviser to then-President Obama.

Biden described Haines as "a fierce advocate for telling the truth and leveling it with decision-makers."

"I know because I’ve worked with her for over a decade," he added. "Brilliant. Humble."

Haines, upon accepting the nomination, said that she "has never shied away from speaking truth to power" and said "that will be my charge as director of national intelligence."