President-elect Joe Biden on Monday announced a number of key Cabinet appointments, including Antony Blinken as secretary of state, Alejandro Mayorkas as secretary of homeland security, and Avril Haines to serve as the first woman to lead the intelligence community, among other positions.

Biden on Monday also announced former Secretary of State John Kerry as special presidential envoy for climate, and will sit on the National Security Council — the first time that the NSC will include an official dedicated to climate change. Kerry's position is not a Cabinet post.

Biden also announced that Jake Sullivan will serve as White House national security adviser, making him one of the youngest people to serve in the role in decades; and Linda Thomas-Greenfield who will be nominated as United Nations ambassador, which will be a Cabinet position in the Biden administration. 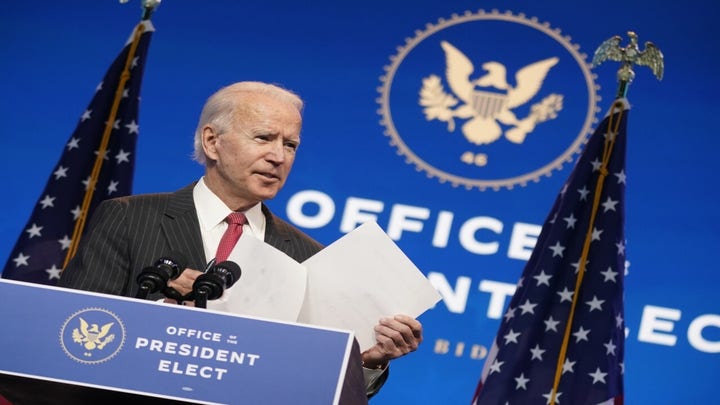 “We have no time to lose when it comes to our national security and foreign policy. I need a team ready on Day One to help me reclaim America’s seat at the head of the table, rally the world to meet the biggest challenges we face, and advance our security, prosperity, and values. This is the crux of that team,” Biden said in a statement. “These individuals are equally as experienced and crisis-tested as they are innovative and imaginative.”

He added: “Their accomplishments in diplomacy are unmatched, but they also reflect the idea that we cannot meet the profound challenges of this new moment with old thinking and unchanged habits -- or without diversity of background and perspective. It’s why I’ve selected them.”

Vice President–elect Kamala Harris also praised the appointments, calling them “crisis-tested national security and foreign policy leaders” with “knowledge and expertise to keep our country safe and restore and advance America’s leadership around the world.”

“They represent the best of America. They come from different places and reflect different life experiences,” Harris said. “But they all share an unwavering belief in America’s ideals and an unshakeable commitment to democracy and the rule of law. And they are the leaders America needs to help meet the challenges of this moment -- and those that lie ahead.”

"The messages from friends and colleagues that I've received over the past 15 hours have been humbling," Blinken tweeted Monday. "Honored to announce, officially, that I have been nominated to serve as Secretary of State."

He added: "If confirmed, this is a mission I will take on with my full heart."

Meanwhile, Mayorkas is the first Latino and immigrant nominated to serve as secretary of homeland security. Mayorkas served as the deputy secretary of homeland security in the Obama administration from 2013 to 2016, and director of U.S. Citizenship and Immigration Services from 2009 to 2013. During that time, Mayorkas led the implementation of DAC and led the department’s response to Ebola and Zika.

Mayorkas began his career in government service at the Justice Department, where he served as an assistant U.S. attorney in the Central District of California where he specialized in the prosecution of white collar crime.

Shifting to the intelligence community, Haines, if confirmed, would be the first woman to serve as DNI. Under the Obama Administration, Haines served as a principal deputy national security adviser and as a deputy director at the CIA — she was the first woman to hold both of those positions.

"President-elect Biden taught me what it takes to safeguard our national security at the highest levels of our government," Sullivan tweeted Monday. "Now, he has asked me to serve as his National Security Advisor. In service, I will do everything in my power to keep our country safe."

And Thomas-Greenfield is a career diplomat, who, upon nomination, will return to public service from retirement. She served in the Obama administration as the assistant secretary for the Bureau of African Affairs. Her career spans three decades, and she has served as an ambassador to Liberia and in postings in Switzerland, Pakistan, Kenya, Gambia, Nigeria and Jamaica.

Meanwhile, Kerry's return to Washington comes after served as secretary of state, who the transition team says "elevated environmental challenges as diplomatic priorities, from oceans to hydrofluorocarbons."

"He was a key architect of the Paris Climate Accord, and signed the historic agreement to reduce carbon emissions with his granddaughter on his lap," the transition team said.