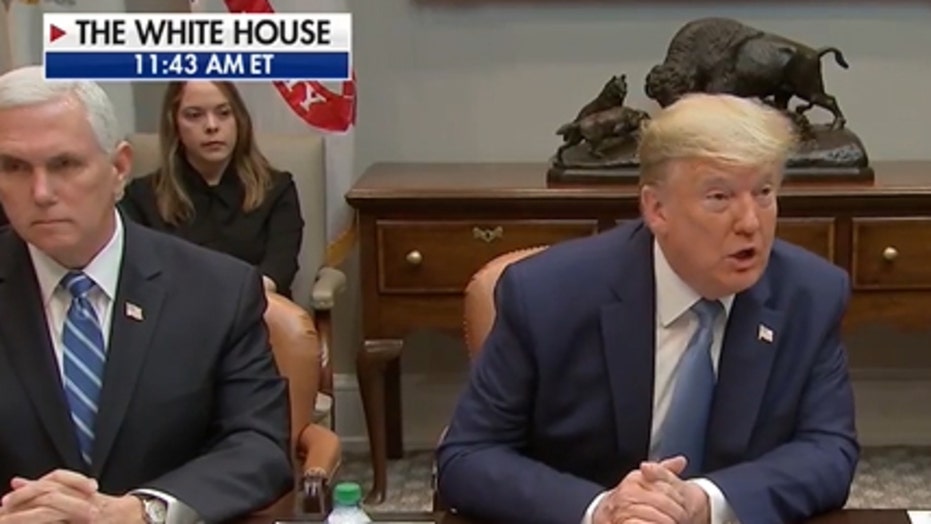 The White House announced Tuesday that insurance companies have agreed to waive all copays on coronavirus testing and treatment amid the threat of the virus riling the nation.

Vice President Pence, from the White House on Tuesday, made the announcement during a meeting with executives from health insurance companies.

“I’m pleased to report, as you requested, Mr. President, that all the insurance companies here -- either today or before today -- have agreed to waive all copays on coronavirus testing and extend coverage for coronavirus treatment in all of their benefit plans,” Pence said.

The White House also announced that as part of the deal with insurance executives, major health insurance companies also agreed to cover telemedicine services, which allow patients to be treated without traveling to a hospital or doctor’s office.

“One of the things I think is most important is from day one, as an industry, and as a company at Anthem, we have been very focused on ensuring access to care, and that cost is not an issue for people to have the testing appropriately done,” Anthem President and CEO Gail K. Boudreaux said at the White House Tuesday. “So, we’re pleased that we’re able to continue to expand this access.”

She added: “As the president said, I think it’s very important for all of our customers, our members and the American people to have this, so we’re very supportive of the efforts underway.”

The announcement came after Medicare and Medicaid made similar changes that would provide coronavirus coverage for beneficiaries.

Administrator of the Centers for Medicare and Medicaid Services (CMS) Seema Varna also announced Tuesday that after the “terrific meeting” with health insurance executives, the administration has also removed “prior authorization requirements” for Medicare and Medicaid recipients, and will “waive prescription refill limits and expand more access.”

Varna called the meeting a “real example of a public-private partnership,” and said the insurance companies will ensure that there are “no surprise billings” and that they “cover the costs” associated with COVID-19 testing.

Tuesday’s meeting came after several in recent days between the president and vice president, whom Trump appointed to lead the coronavirus, or COVID-19, task force, and executives from the pharmaceutical industry, airlines, nursing homes and commercial labs.

Pence and Health and Human Services (HHS) Secretary Alex Azar also said Tuesday that more than 1.1 million coronavirus tests have been dispersed across the nation and that every state has the ability to conduct them. Pence and Azar said that there would be more than 4 million additional coronavirus tests disbursed at the end of the week.

Meanwhile, the president met with Senate Republicans on Capitol Hill Tuesday and warned that Americans should exercise caution, but that the situation is being handled and will eventually be resolved.

“We’re prepared and we’re doing a great job with it and it will go away,” Trump said. “Everybody has to be vigilant and has to be careful but be calm.”

Trump also floated the idea of temporarily doing away with the payroll tax in order to give the U.S. economy a boost as it struggles amid fears of the coronavirus outbreak.

Trump also proposed reducing the payroll tax for both employers and employees from 14.4 percent to zero to give the U.S. economy a boost as it struggles amid fears of the coronavirus outbreak. The president floated the idea during a lunch with Republican senators where the economic response to the coronavirus was the main subject of conversation.

Meanwhile, Democrats are preparing a package of aid that includes unemployment insurance and sick pay for working families struggling to keep paychecks coming as the outbreak disrupts workplaces and the stock market tumbled Monday. A vote could come as soon as this week or push to mid-March.

As of Tuesday afternoon, more than 700 people, in 36 states, including Washington D.C., have tested positive for coronavirus in the U.S.