FILE - In this June 28, 2018, file photo, a Guatemalan father and son, who crossed the U.S.-Mexico border illegally, are apprehended by a U.S. Border Patrol agent in San Diego. California will introduce group trials on Monday, July 9, for people charged with entering the country illegally. Federal prosecutors in Arizona, Texas and New Mexico have long embraced these hearings, which critics call assembly-line justice. California was a lone holdout and the Justice Department didn't seriously challenge its position until the arrival of Attorney General Jeff Sessions. (AP Photo/Jae C. Hong, File)

U.S. Immigration and Customs Enforcement – still in the midst of the ongoing drama over the separations of immigrant families – is hoping to get a huge spending boost next fiscal year even as some Democrats are calling for the agency to be abolished.

The Trump administration wants Congress to dole out $8.3 billion in discretionary funding for ICE for the 2019 fiscal year – or $967 million more than the agency’s 2018 budget – in a move that worries many Democratic lawmakers, who see the infusion of extra cash being used to speed up deportations and other enforcement measures.

The lack of support from Democrats is a major problem for the Trump administration as well as for congressional Republicans, as both will need support from the other side of the aisle given the current divide within the GOP over fiscal issues.

ICE funding and enforcement was a controversial issue even under President Barack Obama, but Trump’s hardline, “zero-tolerance” policy toward illegal immigration has only heightened tensions.

While Democratic leaders like Sen. Charles Schumer of New York and Rep. Nancy Pelosi of California have pushed back against the growing calls within the party to “abolish ICE” and argued in favor of reforming the agency, the growing movement has grown beyond just protesters and far-left lawmakers to include several top Democrats like Sens. Kirsten Gillibrand of New York and Cory Booker of New Jersey.

"I believe that [Immigration and Customs Enforcement] has become a deportation force … and that's why I believe you should get rid of it, start over, reimagine it and build something that actually works," Gillibrand said in late June. 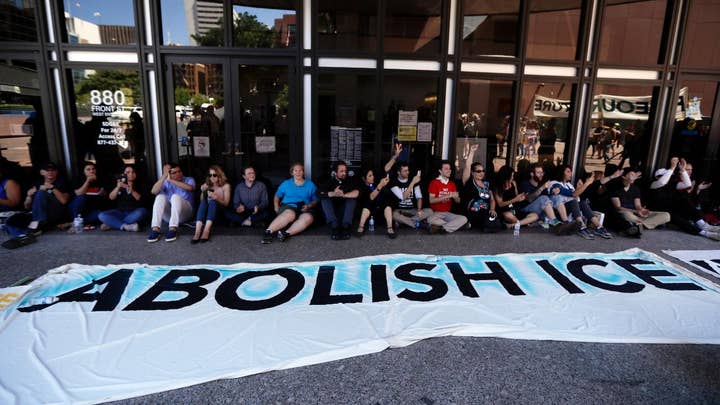 Republicans have struck back, arguing that abolishing ICE would shield violent criminals living in the country illegally from deportation and cause a public safety crisis.

"It isn't just the expression of the radical left that has been speaking out against ICE. The truth is that opposition of ICE has moved to the center of the Democratic Party itself," Vice President Pence said in a speech to ICE employees on Friday. "Just when you thought the Democrats couldn't move farther to the left, leading members of the Democratic Party, including candidates for higher office, are actually openly advocating the abolition of ICE."

The political tit-for-tat looks headed for a heated debate in the House Appropriations Subcommittee and the results could have major effects on November’s midterm elections.

Trump administration officials have signaled they want to detain families indefinitely if they cross the border illegally, regardless of whether they are claiming asylum, in part because they say the cases move much quicker. But a court agreement on how children are treated in immigration custody generally prevents the government from holding children in detention longer than 20 days.

This undated photo released by U.S. Department of Health and Human Services shows inside of the HHS' facility at Tornillo, Texas. A state senator says he's been told the temporary tent shelter in far West Texas for immigrant minors will stay open indefinitely. Texas Democratic Sen. Jose Rodriguez told the El Paso Times that he toured the Tornillo facility Friday, July 6, 2018. More than 300 teens are being housed at Tornillo, which the U.S. government opened last month because its existing shelters were at capacity. (U.S. Department of Health and Human Services via AP)

Justice Department officials have asked that the agreement, known as the Flores agreement, be modified to allow for longer detentions. Homeland Security requested up to 12,000 more beds for a family detention center at a military base, though it asked for 2,000 to be made available quickly and the rest as needed.

The facilities would have to comply with the standards set by the agreement that governs how children are treated in custody, which include access to medical care, entertainment, counseling and air conditioning; though many who have been detained say the accommodations still feel like prison. Congress would have to approve funding to operate the facility.

Meanwhile, the zero-tolerance policy remains in effect for those who illegally cross the border alone: About half of the illegal crossings are single adults.

The charge of improper entry is a misdemeanor and the practice is usually for those caught to plead guilty and be sentenced to time served, or a brief jail sentence.

Right now, adults who arrive with children are no longer being referred for prosecution because there is not enough space to detain families together. It's unclear if or whether families will again face criminal prosecution should space become available.