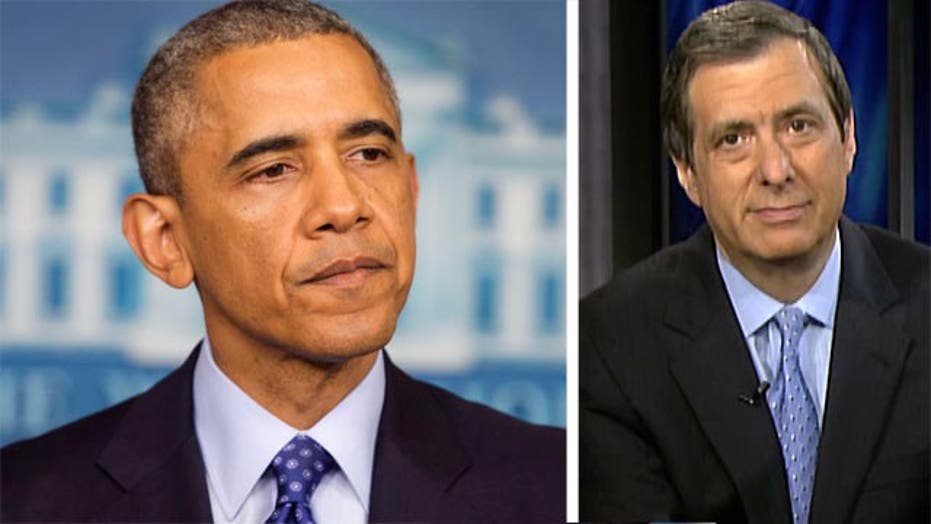 The White House engaged in some truly masterful spinning of the decision to delay action on immigration, and the press half-bought it.

President Obama, for his part, was half-candid.

The upshot was coverage that was about half as tough as it should have been.

Obama was, after all, breaking a fairly recent promise. It was a few short months ago, when immigration reform died yet again in John Boehner’s House, that the president said he would get recommendations on acting unilaterally by the end of the summer and would act without delay.

This was duly noted in news accounts, of course—Politico called it a “sudden reversal”—but it wasn’t rendered as a “Read My Lips” moment. Think of all the times that Mitt Romney was depicted in the press as a flip-flopper. But I didn’t see anyone use the F-word in describing what Obama did. (Yes, he says he’ll act on immigration after the election, but he still broke his word.)

The dilemma for the administration was that any mealy-mouthed explanation—we need more time to study the issue, blah blah blah—would be immediately dismissed by the press. So the strategy was to leak the decision and admit it was political--but with an unnamed source that allowed journalists to write insidery reports. Rather than contest the obvious, that this was raw politics, the message mavens abetted the natural media instinct to depict such decisions as politically driven, but with the administration’s preferred spin.

Usually these things are done with a top official whispering to journalists for a couple of key print and television outlets. But the anonymous White House official actually put out a statement, on background, so everyone could quote the spin.

So when the story was leaked Saturday, Mr. Unnamed Official was quoted everywhere as saying: “Because of the Republicans’ extreme politicization of this issue, the president believes it would be harmful to the policy itself and to the long-term prospects for comprehensive immigration reform to announce administrative action before the elections.”

Get that? It was the Republicans’ fault! And acting now would be “harmful to the policy.”

Now most reporters were savvy enough to point out that what Obama was doing was trying to protect red-state Democratic senators who could lose their seats if they had to defend a sweeping executive order on immigration. And the angry reaction of immigration advocates, who felt betrayed, also made clear that the president was in retreat.

But since journalists also had to quote Boehner and other Republicans as ripping the decision, the stories devolved into spin and counterspin—taking the focus off the president doing a 180 off the high board.

The second phase of the strategy was Obama’s “Meet the Press” interview. The president didn’t deny to Chuck Todd that politics was involved, but only went so far--and like his unnamed aide, used the word “sustainable”:

“But here's the other thing, Chuck, and I'm being honest now, about the politics of it. This problem with unaccompanied children that we saw a couple weeks ago, where you had from Central America a surge of kids who are showing up at the border, got a lot of attention. And a lot of Americans started thinking, 'We've got this immigration crisis on our hands.' And what I want to do is when I take executive action, I want to make sure that it's sustainable.”

Obama followed that with “I'm going to act because it's the right thing for the country.”

Todd, to his credit, said it still sounded like election-year politics.

Obama basically copped to needing more time to sell the executive order because public support has been undermined by the border crisis. And that is true.

But he didn’t admit the other part, that he is trying to save the likes of Mark Pryor and Mary Landrieu from losing their Senate seats and guaranteeing a GOP takeover.

Obama and his team knew they would take a hit and managed the media about as well as could be expected. The press got the gist of the story right but allowed the impact to be blunted. Now the question is whether immigration will fade as an issue in the midterms, since Obama still insists he’ll act once Election Day is safely behind him.