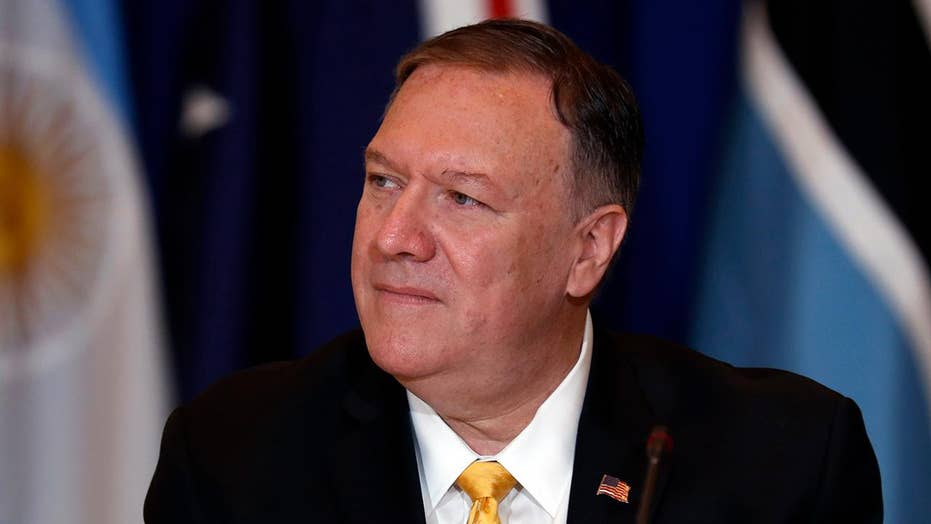 The Democratic chairs of three House committees subpoenaed Secretary of State Mike Pompeo Friday for documents related to Ukraine that they say pertain to the impeachment inquiry against President Trump.

The chairmen of the House Foreign Affairs, Intelligence and Oversight committees initially requested a laundry list of documents on Sept. 9 and sent a follow-up letter on Monday.

The chairmen asked for State Department correspondence and documents dating from Jan. 20, 2017, to the present. The documents relate to reports that Trump pressed Ukrainian officials to investigate potential 2020 election rival Joe Biden, his son Hunter and the Bidens' business activity in Ukraine.

The Democratic lawmakers also demanded any copies of the transcript of Trump's July 25 controversial call with Ukrainian President Volodymyr Zelensky, and a list of State Department officials who might have been involved with the conversation, according to the letter. The chairmen are additionally requesting any State Department records about Rudy Giuliani, Trump's personal attorney, and any records that relate to U.S. military aid to Ukraine.

They said Pompeo has until Oct. 4, to comply with the requests.

All of the officials except Kent are named in a complaint by an intelligence community whistleblower who accused Trump of "using the power of his office to solicit interference from a foreign country in the 2020 U.S. election."

"The failure of any of these department employees to appear for their scheduled depositions shall constitute evidence of obstruction of the House's impeachment inquiry," the chairmen said.

Trump has called the impeachment probe, which centers on his policy toward Ukraine, "another witch hunt," and has repeatedly said his call with Zelensky was "perfect." He has also adamantly denied withholding military aid from the Eastern European country as a condition of a probe of the Bidens.

He pushed back against media reports questioning his call with Ukraine again on Friday, tweeting, "If that perfect phone call with the President of Ukraine Isn’t considered appropriate, then no future President can ever again speak to another foreign leader!"

Zelensky said this week that "nobody pushed me" during his July call with Trump.

A memorandum of the call was made public Wednesday. It shows that while Trump sought an investigation into the Biden family for corruption, the president did not explicitly leverage military aid as had been suggested.

PENTAGON CERTIFIED UKRAINE HAD TAKEN 'SUBSTANTIAL ACTIONS' TO CLEAN UP CORRUPTION, GREEN LIGHTING $250M IN MILITARY AID IN MAY

The initial whistleblower complaint was forwarded to Acting Director of National Intelligence Joseph Maguire on Aug. 26.

The House intelligence committee released a redacted version of the complaint Thursday ahead of testimony from Maguire, who acknowledged that the complaint alleged serious wrongdoing by the president but said it was not his role to judge whether the allegations were credible or not.

Maguire said he was unfamiliar with any other whistleblower complaint in American history that "touched on such complicated and sensitive issues." He praised the whistleblower as having acted honorably, said he recognized the complaint as immediately sensitive and important and insisted the White House did not direct him to withhold it from Congress.

"I believe that everything in this matter here is totally unprecedented," he said.