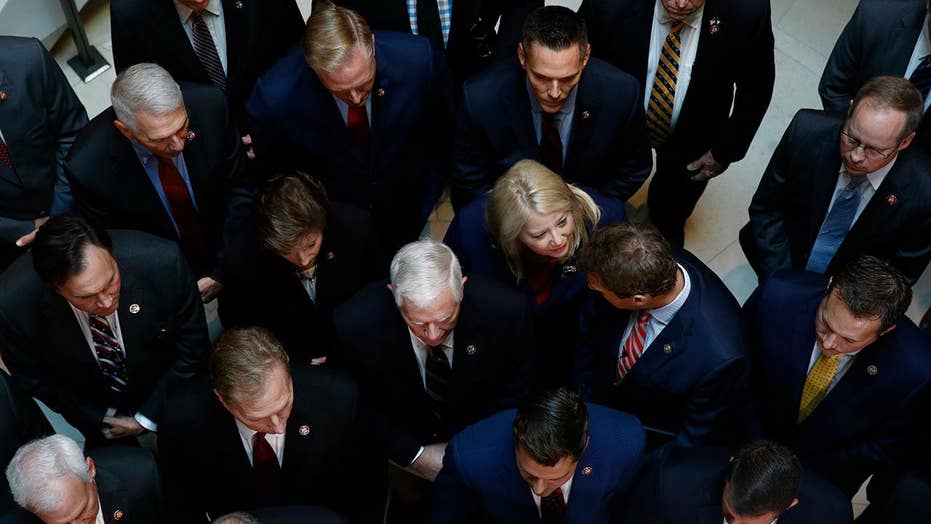 The House Ethics Committee has sent a memo to members of Congress and their staffers about how to conduct themselves in secure areas, weeks after around two dozen Republican lawmakers barged into a closed-door deposition in the impeachment inquiry into President Trump.

The memo, signed by Ethics Committee Chairman Ted Deutch, D-Fla., and Ranking Member Kenny Marchant, R-Texas, reminds members that they are given access to classified rooms "on a 'need to know' basis" and warns that "breaches of security protocols or unauthorized disclosures could result in the decertification of these facilities[, which would] significantly impair the House's ability to conduct its business."

"Inadvertent breaches of security protocols or unauthorized disclosures may be handled as a matter of security by the committees of jurisdiction over the relevant classified information or controlled areas," the memo continued. "However, attempts to gain unauthorized access to classified areas or purposeful breaches of basic security protocols may cause classified information to be improperly disclosed, and may reflect discreditably on the House as a legislative body."

On Oct. 23, about 30 House Republicans, led by Rep. Matt Gaetz, R-Fla., flooded the secure room where Laura Cooper, who oversees Ukraine policy at the Department of Defense, was set to testify. Because there was no agreement that non-members of the Intelligence, Oversight or Foreign Affairs Committees could be present, Cooper's deposition was delayed for approximately hours after Intelligence committee chairman Adam Schiff, D-Calif., suspended the proceedings.

Some of the Republican members brought in phones and other electronic devices into the secure area, despite agreeing to an oath that they would not do so. Members of the House GOP had repeatedly accused Democrats of a lack of transparency in the early stages of the inquiry.

In Friday's memo, Deutch and Marchat reminded members that "portable electronic devices [PEDs] should generally not be taken into any controlled area.  PEDs include, but are not limited to, cell phones, laptops, smartwatches, tablets, or any other devices capable of transmitting or receiving an electronic signal."

The Republicans eventually left the secure room and Cooper completed her deposition.

Following the incident, House Homeland Security Committee Chairman Bennie Thompson, D-Miss., sent a letter to House Sergeant at Arms Irving, raising “serious concerns” about the security of SCIF’s. He asked Irving to “take action with respect to the Members involved in the breach.”