House Speaker Nancy Pelosi told reporters during a news conference that she's confident Joe Biden will beat President Trump and Democrats are ready to work with Joe Biden on fighting the coronavirus.

Democrats are projected to expand their majority in the U.S. House due to an erosion of President Trump's support in suburban communities and a fundraising advantage that has allowed Democrats to go on offense in traditionally red districts, election analysts say.

Democrats won back the House in 2018 by flipping suburbs outside major metropolitan cities like Los Angeles, New York, Philadelphia, Denver and Washington, D.C.

But two years later, Democrats are not only poised to keep most of their gains, but they're also marching deeper into red territory in areas outside Cincinnati, St. Louis, Omaha, Phoenix, San Antonio and Indianapolis, said David Wasserman of the Cook Political Report.

"We're seeing erosion for Republicans in suburbs of smaller and more conservative metro areas ... where Republicans are poised to lose seats."

The Cook Political Report projects Democrats will have a net gain of between five and 15 seats after Tuesday's election. Inside Elections projects an even better pickup for Democrats of 14 to 20 seats. And FiveThirtyEight says Democrats have a 98 in 100 chance of retaining their House majority.

The political handicappers' outlook for Democratic control of the House is stronger than their projections for Democrats winning the White House and Senate.

Optimistic Democrats are planning to remain in power, even talking of their transition agenda under a Biden administration.

"All around the country you see this enthusiasm," House Speaker Nancy Pelosi, D-Calif., said on MSNBC Friday. "We feel very confident. I know that we will win the House and increase our numbers."

But Republicans are betting that if Trump surprises America with another poll-defying election win, he'll pull Republicans in the House across the finish line with him.

"Nobody gave us a shot. They haven't given us a shot since the beginning," Rep. Tom Emmer, chair of the National Republican Congressional Committee, said of election analysts.

"If President Trump can perform at or above his 2016 numbers, we have a path back to the majority," Emmer told Fox News. "This thing is going to continue to tighten."

Republicans are trying to win back suburban seats by portraying the moderate freshman Democrats as falling in line with Pelosi and the liberal left, and ignoring their campaign pledges of bipartisanship.

In this image from video, Rep. Alexandria Ocasio-Cortez, D-N.Y., speaks on the floor of the House of Representatives at the U.S. Capitol in Washington, Thursday, April 23, 2020. (House Television via AP)

New for this cycle is that Rep. Alexandria Ocasio-Cortez, D-N.Y., and Rep. Ilhan Omar, D-Minn., of the so-called freshman "Squad," have gotten starring roles in some GOP attack ads warning: "Stop the Radical Left." The ads typically tie a Democratic candidate to the Green New Deal, higher taxes, defunding the police or Ocasio-Cortez's voting record.

GOP attack ads featuring Squad members have even cropped up against Democrats who aren't even in Congress but are trying to flip red seats.

Among the targets are Cameron Webb, a lawyer and doctor trying to win in Virginia's 5th District; Kate Schroder, a public health professional in Cincinnati vying to unseat GOP Rep. Steve Chabot; and Candace Valenzuela, who would be the first Black Latina in Congress if she wins an open GOP seat in Texas' 24th District.

U.S. House candidate Dr. Cameron Webb regularly takes time off from the campaign trail to work hospital shifts and teach his students at the University of Virginia’s School of Medicine. (Dr. Cameron Webb for Congress)

"Congresswoman Ocasio-Cortez and Congresswoman Omar have really taken center stage in terms of who the Republican Boogeymen or Boogeywomen are this cycle," said Jacob Rubashkin, a reporter/analyst for Inside Elections, a nonpartisan newsletter in Washington, D.C.

Like the Cook Political Report, Rubashkin projects Democrats to expand their majority because of Trump's suburban slump among women and Democrats' cash advantage that buys them more airtime in competitive districts.

Democrats now have a 233-201 majority (including five vacant seats). The 435th member is outgoing Libertarian Rep. Justin Amash. In a sign of the times, Amash's traditionally conservative west Michigan district is now considered a toss-up between Republican Peter Meijer, an Iraq war veteran whose grandfather started Meijer superstores, and Democrat Hillary Scholten, a former Department of Justice and nonprofit lawyer.

Republicans need a net gain of 17 seats to win back the majority. 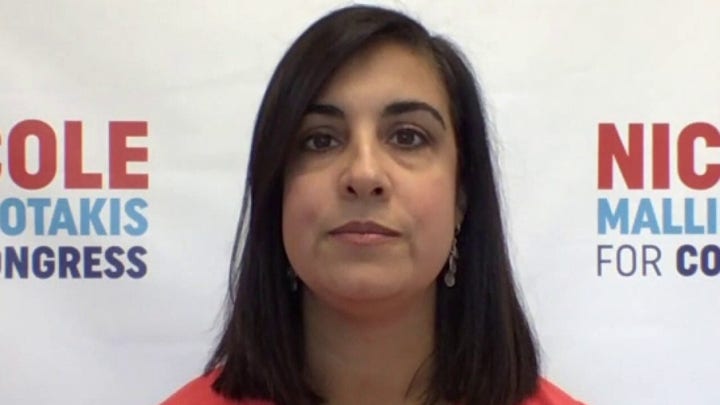 But there are many more seats Democrats are targeting to pick up, including a flurry of GOP seats with no incumbent. Two open seats in North Carolina are favored to go to Democrats because of new congressional district maps.

Ground zero for Democrats' effort to flip traditionally conservative districts is Texas, where they are competing strongly in three open seats and a fourth occupied by GOP Rep. Chip Roy, R-Texas.

Other Republican incumbents facing tough reelection fights include New Jersey Rep. Jeff Van Drew, the former Democrat who jumped parties and pledged his support to Trump amid impeachment; the newly elected Garcia who faces a rematch with Democratic Assemb. Christy Smith in California's 25th District; Rep. Don Bacon in Nebraska who will have a rematch with 2018 Democratic challenger Kara Eastman; Rep. Ann Wagner of Missouri; Rep. Rodney Davis in Illinois; Rep. Jim Hagedorn of Minnesota; and Chabot in Ohio.

"The president is behind his 2016 mark by anywhere from seven ... to 12 points depending on the district and that just creates a whole host of vulnerabilities for Republicans that didn't used to exist," Rubashkin said.

Democrats have focused their messaging on health care, accusing Republicans of wanting to take away medical protections during the coronavirus pandemic. The Democratic Congressional Campaign Committee is on offense with TV ads in 11 districts that Trump solidly won by at least 10 points.

“House Democrats are pushing deep into Trump country with doctors, combat veterans and foreign service officers who are running on a message of protecting Americans’ health care and getting this pandemic under control to get people back to work," said DCCC spokesperson Robyn Patterson. "Voters know we can’t get our economy on track until we get this pandemic under control – which is why so many Trump district voters are lining up to vote for Democrats for Congress.”

If the blue wave materializes and more Democrats are elected at the state level, too, then Democrats would be in power when the new congressional districts are drawn -- a key advantage that may give them an edge for the next 10 years. The once-a-decade redistricting last occurred after Republicans dominated during the Tea Party wave of 2010.

"Democrats couldn't have picked a better year to have a good year than 2020 because last time around they saw the consequences of a redistricting cycle that takes place after a red wave," Wasserman said. "Republicans were able to lock in their gains for most of the next decade. And this time around, Republicans aren't going to have the same advantage they did 10 years ago."