In the wake of a new report the New York Times is banning reporters appearing on Don Lemon, Rachel Maddow's shows, Sean Hannity said the newspaper is 'running scared.'

The New York Times is “running scared,” fearful it has fallen victim to the “conspiracy media mob,” according to Sean Hannity.

Hannity made the claim during a fiery opening monologue Thursday night, in the wake of a bombshell report claiming the “Gray Lady” has banned its reporters from appearing on a number of liberal cable news shows that are viewed as “too partisan.”

"The Times was wary of how viewers might perceive a down-the-middle journalist like [David] Enrich talking politics with a mega-ideological host like Maddow," Vanity Fair's media correspondent Joe Pompeo wrote.

“The New York Times? They are now scared, taking notice, and they are realizing, uh-oh, they've been duped by the conspiracy TV media mob,” Hannity said Thursday night.

“Look at this new report -- the New York Times is warning editors and reporters against appearing on primetime shows on ‘Fake News CNN’ and ‘Conspiracy TV MSNBC’.

“Why would the New York Times not go on their favorite programs, who refused to ask the tough questions to begin with, like, did Robert Mueller forget his previous statements in yesterday’s remarks, or did he intentionally muddle the waters to fuel the Democrats’ unrelenting impeachment rage psychosis?” 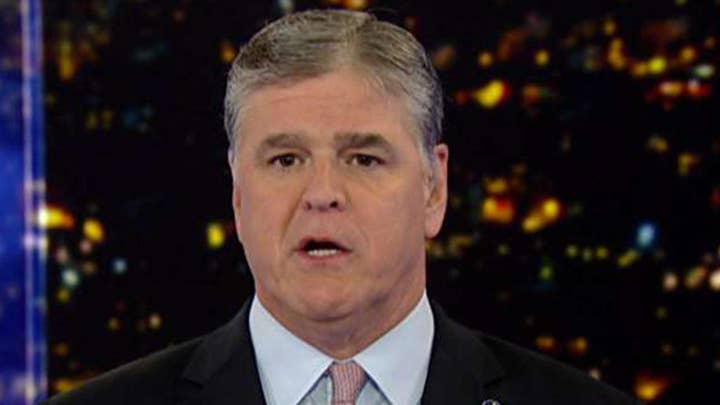 Hannity’s remarks came after Vanity Fair claimed sources told the magazine the Times' executive editor Dean Baquet expressed concerns certain primetime shows are becoming more opinionated and that reporters who appear on their shows would be "perceived as being aligned" with the show's politics.

HANNITY CALLS OUT THE MEDIA FOR THEIR COVERAGE OF MUELLER'S 'CLARIFICATION'

“He thinks it’s a real issue,” one source said, another adding “Their view is that, intentionally or not, it affiliates the Times reporter with a bias.”

Both MSNBC and CNN have hired several prominent New York Times reporters as contributors in recent years, but it is unclear from the Vanity Fair report if they would be discouraged from appearing on shows deemed "too partisan."