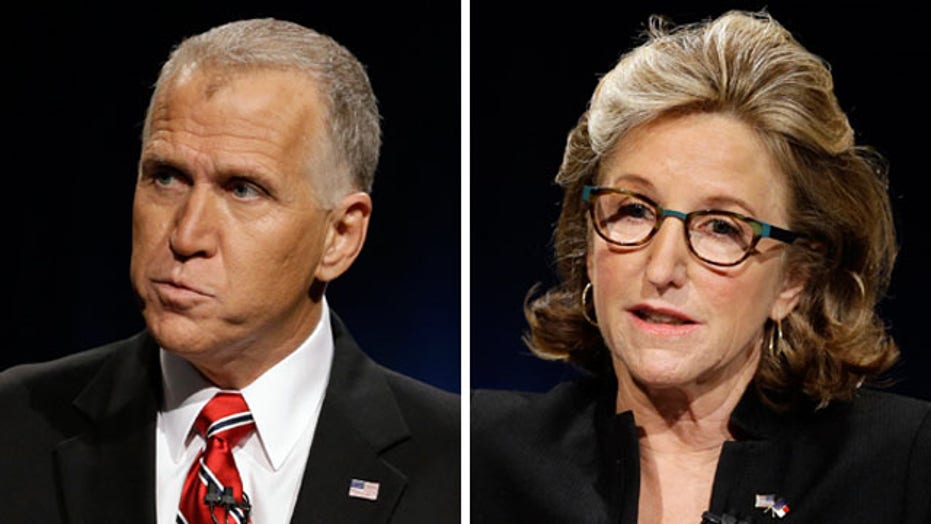 SALISBURY, N.C. – Regardless of who wins, the North Carolina Senate race will go down as the most expensive, likely ugliest contest of the 2014 midterms, with more than $100 million spent and more than 90,000 ads – most of them attacks – aired across the state.

“I think both sides see each other as really the evils,” said Catawba College political science professor Michael Bitzer.

Democrat Kay Hagan is fighting for a second term in the Senate. Six years ago, she famously beat Elizabeth Dole to steal the seat. Republicans are determined to win it back this year and have poured millions into the campaign of Thom Tillis, speaker of the North Carolina House.

Until recently, Tillis remained competitive, but trailed Hagan in the polls. After news broke that she skipped an Armed Services Committee hearing on the Islamic State to attend a fundraiser, Tillis’ fortunes began to improve. Two of the latest polls have him tied with Hagan. The Real Clear Politics average has her up by a single point – well within the margin of error.

“Here we are with Americans being beheaded and Senator Hagan doesn’t even show up for the briefing,” said McCain.

When asked what Hagan’s biggest liability is, Tillis told Fox News it’s the fact she hasn’t done anything significant as a senator.

“Senator Hagan, you’ve been a senator for six years,” Tillis said. “Tell me what you’re proud of. Tell me what you’ve done. Tell me the promises you’ve fulfilled. That’s what this election’s about.”

If Tillis’ complaint sounds partisan, consider this. The Charlotte Observer newspaper, in an editorial endorsing Hagan said: “Kay Hagan has been a disappointment to many voters” and “has done the minimum you’d expect from a U.S. Senator.” The Observer also lamented that she “has a chronic reluctance to take firm positions on controversial issues.”

Still, she has remained more competitive than other Democratic incumbents in Senate races across the nation. Part of the reason is that North Carolina is truly a 50-50 state. In 2008, it went for President Obama. In 2012, Mitt Romney pulled off a narrow victory. Another reason is that Hagan’s campaign – with help from tens of millions of dollars in Democratic outside money -- has pummeled Tillis relentlessly.

Hagan’s main points of attack have been against Tillis’ moves to block Medicaid expansion, end extended unemployment benefits and support new abortion restrictions. She has also accused Tillis of cutting education spending by $500. In truth, the budget actually increased spending on education, though not at levels many Democrats wanted.

“We’re spending a billion dollars more,” Tillis told Fox News. “We’d like to spend more. What we didn’t want to do is implement a tax increase on working families. They can’t afford it.”

It’s not that Tillis has been some sort of shrinking violet. His campaign has viciously attacked Hagan – mostly over her support for ObamaCare and the president’s agenda and for unswervingly following the course laid down by Senate Majority Leader Harry Reid.

Who wins the argument is truly a coin-toss. This state is so evenly divided politically that it will all come down to who can get more of their voters out to the polls. And there is less time to do it. New rules cut the number of early voting days from 17 to 10. Catawba College’s Michael Bitzer has been analyzing the vote so far and says at the moment, Democratic turnout appears to be more like a presidential election year than a midterm.

“Democrats seem to be doing very well even though they should be depressed numbers,” Bitzer told Fox News. “Nationally the enthusiasm is on the Republican side, but here in North Carolina, it appears the Democrats have the edge.”

Tillis told Fox News it’s typical for early voting in North Carolina to favor Democrats. Republicans tend to do better on Election Day. And Tillis believes that when the final votes are cast, Hagan ultimately will fall short.

“She’s failed people in North Carolina,” Tillis told Fox News. “She hasn’t led, she hasn’t reached across the aisle. And that’s why I believe we’ll win on November 4th.”