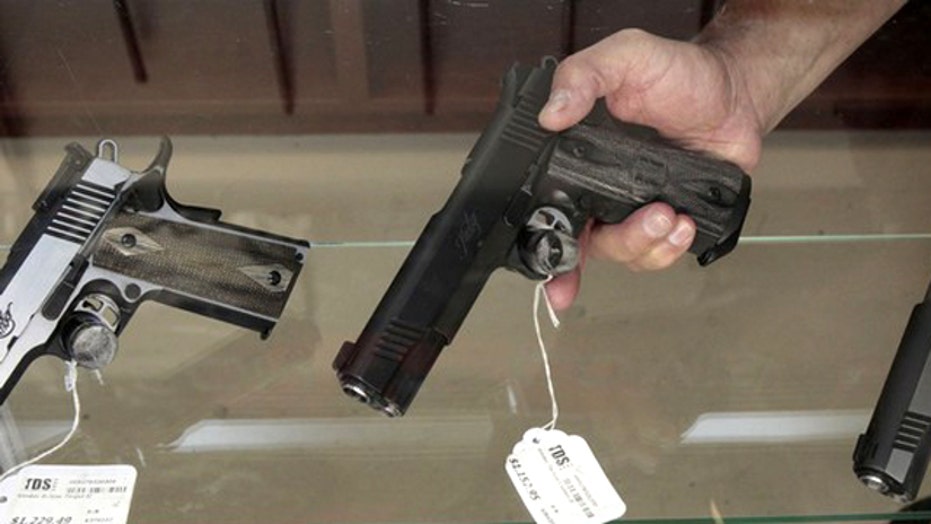 The prospect of a renewed assault weapons ban in the wake of the Connecticut school massacre has set of a round of buying, as thousands of Americans head to their local gun store to secure the popular AR-15 -- the model used by the school gunman -- before potential government prohibitions on their purchase.

They are also buying the .223 ammunition used by the AR-15 and the type of high-capacity magazines covered under the last federal assault weapons ban, which Congress let expire without renewing.

"Sales were through the roof on Saturday," said Eaton. "People were buying everything they could out of fear the president would try to ban certain guns and high-capacity magazines."

"We had to call in extra staff," Medina was quoted in the Post story. "The wait times were high."

The CBI says it processed more than 4,200 background checks on Saturday, the day after the Newtown, Conn., shooting. That surpassed the previous high of 4,028. Nationwide, FBI data shows 16.4 million background checks were run in 2011. An agency spokesman said Monday it did not keep daily numbers and would not have figures for December until early January.

The Connecticut gunman, 20-year-old Adam Lanza, killed his mother before taking her car and her rifle and two handguns and driving to the Sandy Hook Elementary School. There he killed 20 children and six adults before taking his own life.

In the aftermath of the tragedy, Democratic lawmakers have argued there is a need for new gun measures, and President Obama has seemed to move in that direction without voicing support for specific legislation.

"I am selling a ton of ammunition," Serdy said. "My people figure it is easier for the president to ban ammunition sales than to get a gun bill through Congress."

Other countries have tried limiting the sale of ammunition as an easier alternative to banning guns. Mexico for example, bans any "military cartridge." In the U.S., the AR-15 and M-16 ammunition use the same bullet, the .223 and NATO 5.56 mm round.

The AR-15 is the civilian version of the military's M-16 and M-4. In surveys, about 50 percent of buyers say they own AR-15s for target practice; 30 percent for hunting and the rest for personal protection. Despite often being called a fringe gun by critics, the AR-15 is the most popular gun sold in the US today, according to gun dealers. Roughly 220,000 were sold in 2010, after peaking at more than 300,000 immediately following Obama's election.

Sen. Diane Feinstein said Monday she will introduce a new assault weapons bill in January to stop the sale of more than 100 types of assault weapons.

"On the first day of the new Congress, I intend to introduce a bill stopping the sale, transfer, importation and manufacturing of assault weapons as well as large ammunition magazines, strips and drums that hold more than 10 rounds," Feinstein said. "I am in the process of gathering support for the bill in the Senate and House."

- semi automatic, meaning one round is fired per each pull of the trigger
- used a detachable magazine

And featured any two of the following attributes:

While the weapons look menacing, many gun advocates say they are no more deadly than some other guns that use a larger and heavier bullet. And since they are semi-automatic, they should not be called or confused with the fully automatic military version. Nor should a gun used by millions be outlawed because of the actions of a mentally ill young man.

Critics however say these high-power weapons, capable of firing multiple rounds quickly, are too dangerous, since their high velocity rounds can pierce most body armor and
their magazines allow for mass shootings.

Yet, statistics show, unlike handguns or shotguns, rifles account for only a fraction of homicides in the United States. Of 12,664 murder victims last year, only 323 were killed with rifles, according to the FBI.

In 2007, the Virginia Tech shooter used a Glock and Walther handgun to kill 32 and wounded 17.

More recently, AR-15s were used in the Colorado movie theater shooting, one last week in a Portland, Ore. mall and in the Newton elementary massacre.

Even investors apparently believe this time Congress may act, fearing the long-term outlook is worse than a short-term sales bounce. Share prices for gun makers like Strum Ruger, Smith and Wesson and were down 4 to 8 percent the last two business days.