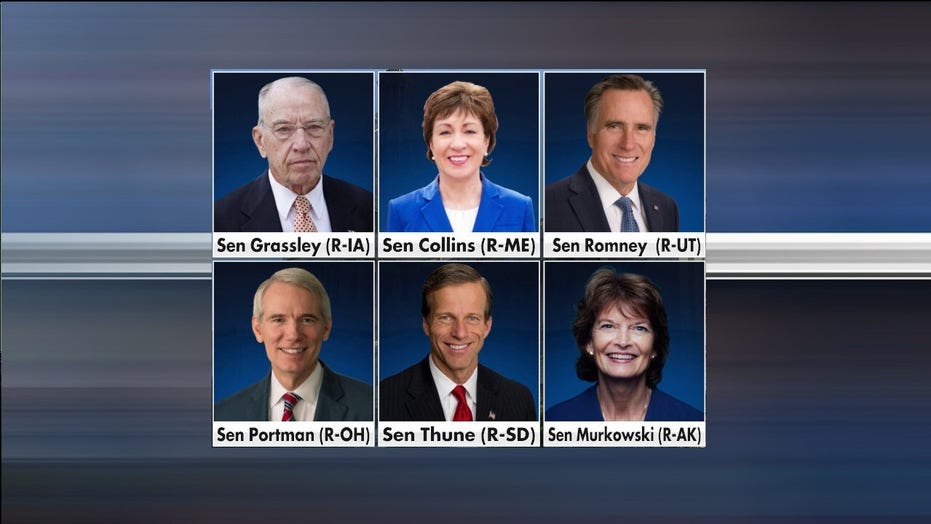 Senate Finance Committee Chairman Chuck Grassley, R-Iowa, announced on Thursday he will hold up two of President Trump's key appointments until the White House provides some reason for the recent firings of the Intelligence Community and State Department inspectors general -- even as Grassley implied a pretextual justification would suffice.

Grassley specifically said he would object to efforts to quickly and unanimously confirm Christopher Miller as director of the National Counterterrorism Center, and Marshall Billingslea as undersecretary for arms control and international security at the State Department.

The broadside came after Grassley said a recent letter from the White House had failed to comply with the 2008 Inspector General Reform Act, which requires that the White House notify Congress at least 30 days before it terminates an inspector general -- and explain why the firing is occurring.

"On April 8, 2020, I sent a bipartisan letter to the president cosigned by seven of my colleagues regarding the removal of Intelligence Community Inspector General (IC IG) Michael Atkinson," Grassley said in a statement entered into the congressional record. "That letter reminded the president of his requirement under the Inspector General Reform Act to provide clear reasons for such removal. After a delay, the White House promised me a response to my letter that fulfilled the statutory requirement by providing substantive reasons for the removal. On the evening of May 26, 2020, I received a response from the White House, but it contained no explanation for the removal of the IC IG."

FILE - In this Oct. 4, 2019, file photo, Michael Atkinson, the inspector general of the intelligence community, arrives at the Capitol in Washington for closed-door questioning about a whistleblower complaint that triggered President Donald Trump's impeachment. Trump has fired Atkinson. Trump informed the Senate intelligence committee Friday, April 3, 2020, of his decision to fire Atkinson, according to a letter obtained by The Associated Press. (AP Photo/J. Scott Applewhite, File)

Fired State Department Inspector General Steve Linick has defended his work as “impartial” and “without regard to politics." Trump fired Linick from his post as State Department watchdog on the recommendation of Secretary of State Mike Pompeo.

Trump has suggested he isn't bothered by Linick's termination, telling reporters, "I'd rather have [Pompeo] on the phone with some world leader than have him wash dishes because maybe his wife isn't there."

Meanwhile, fired intelligence community IG Michael Atkinson has said he's "disappointed and saddened" at Trump's decision to fire him. Atkinson had alerted Congress to concerns about a Trump phone call with the president of Ukraine – a matter that led to the president’s impeachment last year.

Atkinson stood by his decision to disclose a whistleblower's complaint against Trump, adding: "Those of us who vowed to protect a whistleblower's right to safely be heard must, to the end, do what we promised to do, no matter how difficult and no matter the personal consequences."

Republicans, however, said Atkinson improperly assigned credibility to the supposed whistleblower's complaint, which was essentially a policy dispute that didn't qualify under existing whistleblower statutes.

MARGOT CLEVELAND: WHY ATKINSON DESERVED TO BE FIRED

"As the Office of Legal Counsel explained, the complaint against the president did not accuse the president of misconduct related 'to the funding, administration, or operation of an intelligence activity,'" wrote Margot Cleveland for The Federalist. "Rather, the complainant charged Trump with 'using the power of his office to solicit interference from a foreign country in the 2020 U.S. election'—an allegation the transcript from the call negated, in any event. Moreover, the DNI does not have 'responsibility and authority' over Trump, making the ICWPA further inapplicable to the situation at hand."

Grassley, however, has suggested he isn't satisfied with Trump's repeated assertions that the whistleblower was "fake" and that Atkinson did a "terrible job."

"Without sufficient explanation, the American people will be left speculating whether political or self-interests are to blame," Grassley said. "That’s not good for the presidency or government accountability."

Republicans, and the White House, have pointed out that the Obama administration terminated several inspectors general without adequate notice. Joe Biden recently admitted that he didn't "recall" the Obama administration's conspicuous 2009 firing of Gerald Walpin as the IG for the Corporation for National and Community Service, after Walpin undercovered evidence implicating a prominent Obama donor.

But, Grassley said, the Obama administration at least attempted to provide answers, even though they appeared pretextual.

"The White House’s response states that the president was acting in a manner that comported with the precedent that began under the Obama administration," Grassley continued.

"The letter states that the President’s letter mirrors the one sent by President Obama when he removed IG Walpin," Grassley said. "What that letter fails to mention is that President Obama, at the demand of myself and other members of this chamber, eventually did send several letters explaining in much greater detail the reasons for the removal of Mr. Walpin. They were inadequate responses that continually changed and eventually resulted in a bicameral investigation into the matter, but reasons were provided."

TRUMP RIPS INTO INTEL IG: A 'DISGRACE' TO IGs?

Some Obama officials, for example, publicly complained that Walpin was "confused and disoriented" at an agency board meeting, had issues with honesty and "engaged in other troubling and inappropriate conduct." That charge led Glenn Beck to issue a senility test to Walpin live on-air on Fox News. Walpin passed.

“I can only say that I became a thorn in the side of someone, because I was doing my job,” Walpin told Beck.

The Obama administration, however, also saw the departures of other IGs under conspicuous circumstances. "There has been a series of departures of inspectors general this year, prompting critics to charge that agencies are trying to quash criticism from the officials who are supposed to be their own in-house watchdogs," Politico reported in 2009.

And the State Department went without a permanent inspector general for more than four years in the Obama administration, though the Washington Post reported that the agency's acting inspector general still conducted some probes.

"In the job, he has doubled the department’s staff and carried out key investigations," the Post's editorial board wrote, referring to the acting inspector general of the State Department. "But fully instated inspectors general are far preferable to their acting counterparts, both substantively and symbolically."

Meanwhile, Fred Weiderhold was ousted as Amtrak's inspector general in 2009 — but only after receiving $310,000 in a severance payment that severely restricted his ability to say anything negative about the agency.

Weiderhold had reportedly found that Amtrak was mismanaging funds, including some $100 million in legal fees from 2002 to 2005. He stepped down, the Journal noted, "around the time a report he commissioned concluded that the ‘independence and effectiveness’ of the inspector general's office was ‘being substantially impaired’ by Amtrak managers."

“The public’s business ought to be public, but it has taken over a month of digging for Congress to get to the truth about Amtrak firing its inspector general,” Iowa GOP Sen. Chuck Grassley said. “It makes you wonder what Amtrak wanted to hide by trying to muzzle its former watchdog.”

Grassley also sounded the alarm about the Obama administration's firing of the International Trade Commission's Acting Inspector General Judith Gwynn, who was kept on six-month contracts and finally terminated amid allegations someone was forcibly stealing files from her office.

“I am unaware of any other agency Inspector General that serves under such a constraint and am curious to learn what statutory authority gives the USITC the ability to make a limited term appointment,” Grassley wrote at the time.