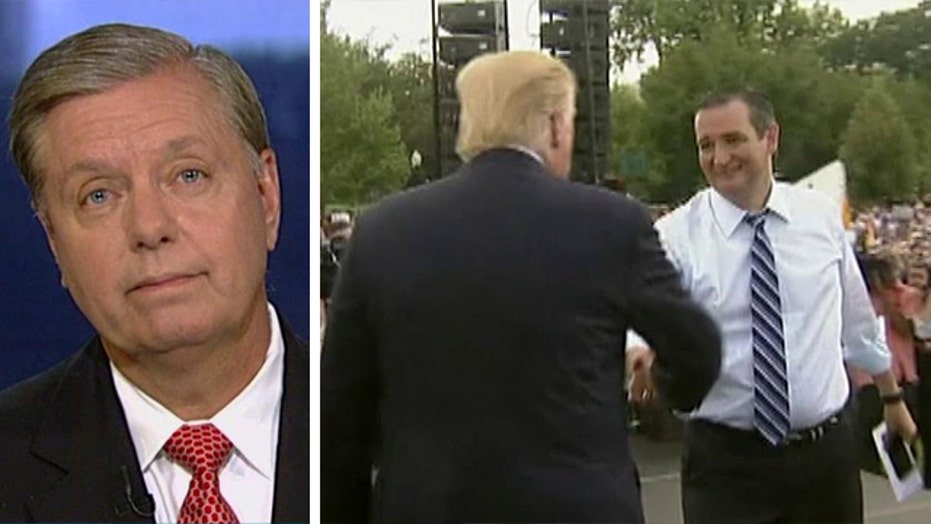 Sen. Graham on not being invited to rally against Iran deal

With his polls numbers in the single digits, the South Carolina lawmaker and defense hawk joined other GOP candidates in the second-tier debate to make his case about why he would be the best commander in chief.

“I've been in the military 33 years, 140 days on the ground in Iraq and Afghanistan,” Graham said. “I am so ready to get on with winning a war that we can't afford to lose.”

Graham also defended himself for once suggesting that Hillary Clinton, the 2016 Democratic frontrunner, was a good secretary of state.

He said he wasn’t fixated on attacking Democrats and in fact wants to work with them if elected president. However, he was hard on Clinton.

“Where in the hell were you on the night of the Benghazi attacks?” Graham asked. “I’ve got a real good chance of beating her because I don’t criticize her all of the time.”

A U.S. ambassador and three other Americans were killed in the Sept. 11, 2012, terror attack on a U.S. outpost in Benghazi, Libya.

“Country over party,” Graham continued, before pointing out that Republican President Ronald Reagan and House Democratic Speaker Tip O’Neill worked well together and drank together.