South Dakota Gov. Kristi Noem addresses an abortion bill she will discuss in the upcoming State of the State address.

South Dakota Gov. Kristi Noem, R., is proposing a bill to the legislature that would prevent abortion for babies based on Down syndrome diagnoses.

"Today, I give the people of South Dakota an update on where we sit as a state, the challenging year that we’ve had but also where we can go from here in the opportunities we can grasp a hold of for families. I will talk about strong families, our economy, how to invest in our future and protecting life," Noem told "Fox & Friends" on Tuesday.

Noem was accompanied by Fox News contributor Rachel Campos-Duffy, her husband, former Wisconsin GOP Rep. Sean Duffy, and their daughter Valentina, who was born with Down syndrome. Noem said it is an "incredible conversation to have" and that "every life is precious regardless of the family's situation."

"I think little Valentina, right here. Her little face shows what a blessing that she is to this family, they are going to talk to the people of South Dakota and legislators how important that bill is," Noem said.

The Duffy family will be joining Noem on stage during her State of the State address to talk about preserving life. Noem will deliver her first such address since the coronavirus pandemic struck South Dakota during the last legislative session.

Campos-Duffy said she is "proud of Gov. Noem for taking on an important issue." She and her husband encouraged women to keep their child if he or she is diagnosed with the genetic disorder.

"I don’t think it is a coincidence that she is a mom and this is coming out of a mom governor. At this time, especially, we are living in a time where so many people are being censored and I think Gov. Kristie Noem is giving a voice to a group of people who don’t have a voice, who don’t have a lobby, who don’t have anyone to fight for them other than their moms and good leaders like Gov. Noem," Campos-Duffy said. 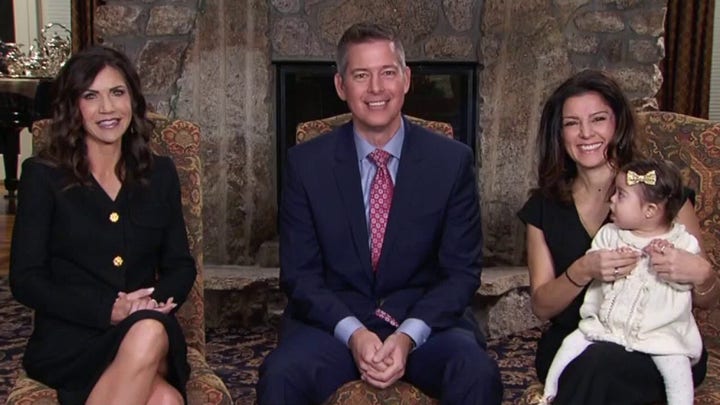 "I would just say to any woman who has a diagnosis, who gets that call from the doctor just like I did, Valentina has given me as much joy and pride as any of my other little babies, and she is an American and she has the right to live just like everybody else."