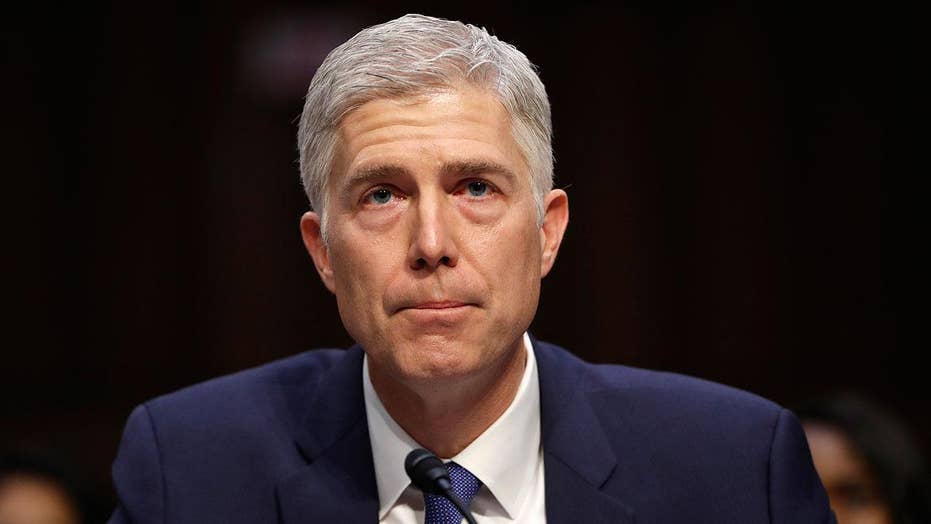 Supreme Court nominee Neil Gorsuch vowed Monday to be a “faithful servant of the Constitution” and “apply the law impartially,” during the first day of his Senate confirmation hearings that repeatedly exposed the partisan divide in Washington.

“I pledge to each of you and to the American people that, if confirmed, I will do all my powers permit to be a faithful servant of the Constitution and laws of our great nation,” said Gorsuch, who spoke at the end of the roughly four-hour Senate Judiciary Committee hearing.

Gorsuch, a respected, highly-credentialed judge and conservative member of the Denver-based 10th U.S. Circuit Court of Appeals, attempted in his remarks to bridge the political divide and become President Trump’s replacement for conservative Justice Antonin Scalia.

“In my decade on the bench, I have tried to treat all who come to court fairly and with respect,” said Gorsuch, his voice cracking a few times. “I have ruled for disabled students, prisoners and workers alleging civil rights violations. Sometimes, I have ruled against such persons, too. But my decisions have never reflected a judgment about the people before me -- only my best judgment about the law and facts at issue in each particular case.”

The hearing opened with Chairman Sen. Chuck Grassley of Iowa expressing his views on the high court before championing Gorsuch, saying judges “play a limited role” in government and are “not free to update the Constitution.”

“That’s not their job," he said. "That power is retained by the people, acting through their elected representatives,” Grassley said before arguing the Obama administration tried rewriting federal laws “dozens of times.”

His remarks were followed by California Sen. Dianne Feinstein, the top Democrat on the committee, immediately making clear her frustration about the Republican-led Senate refusing to hold hearings last year for her party’s pick -- Judge Merrick Garland -- to the fill the open Supreme Court seat.

“I just want to say that I’m deeply disappointed that under these circumstances that we begin our hearing,” said Feinstein, who raised questions about Gorsuch’s positons on such issues as abortion and Second Amendment rights.

“For those of us on our side … our job is to determine whether he will protect the legal and constitutional rights of all Americans, not just the powerful and the wealthy,” she continued.

Gorsuch, 49, returns to the Senate chamber on Tuesday.

Each of the committee’s 17 members will then get at least 50 minutes of questions over two rounds.

Grassley said the committee is scheduled to vote April 3 on the Gorsuch nomination, with a full Senate vote expected early next month.

Gorsuch is expected to clear both votes, considering Republicans have the Senate majority.

“No matter your politics … you should be concerned about the preservation of our constitutional order and the separation of powers,” Grassley said. “And if you are concerned about these things, as you should be, meet Judge Neil Gorsuch. We have before us today a nominee whose body of professional work is defined by an unfailing commitment to these principles.”

Though Gorsuch’s record has also been praised by some left-leaning legal scholars, several Senate Democrats have already signaled their intentions to oppose his nomination, amid the larger effort to stop Trump at essentially every turn.

But delay tactics by Democrats could lead Senate Majority Leader Mitch McConnell, R-Ky., to exercise procedural maneuvers of his own to eliminate the 60-vote filibuster threshold now in place for Supreme Court nominations, and with it any Democratic leverage to influence the next Supreme Court fight.

Time and again Monday, committee Democrats attempted to tie Gorsuch to Trump and railed against Senate Republican leaders’ decision to wait until after the November presidential election to fill the Scalia seat.

Connecticut Sen. Richard Blumenthal, a fellow Democrat, argued that Trump has launched “vicious attacks” and made “demeaning comments” against judges.

“These times are not ordinary,” he said.

Texas Sen. Ted Cruz, a GOP committee member and former Supreme Court clerk, said Scalia had a modest view of the law and that his “legacy would be at stake,” had former-President Obama or 2016 Democratic presidential nominee Hillary Clinton nominated a replacement.

“My Democratic colleagues feel they have no choice to manufacture attacks to protect themselves in primaries back home,” he also said.

Gorsuch also repeatedly thanked his wife, children, mentors and others.

“I could not even attempt this without Louise, my wife of more than 20 years,” he said before citing Scalia as a mentor.

“He reminded us that the judge’s job is to follow the words that are in the law -- not replace them with words that aren’t,” Gorsuch added.