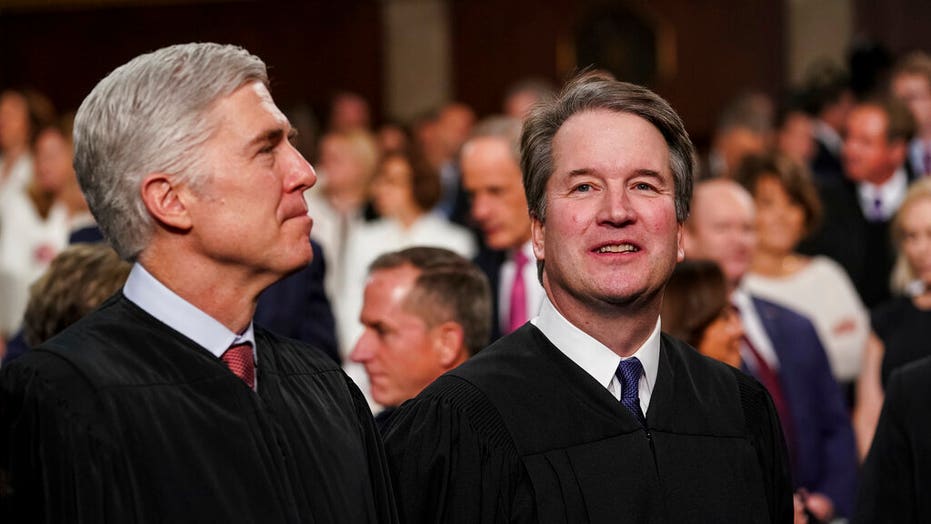 EXCLUSIVE: Trump advisers David Bossie and Cory Lewandowski say in a new book making the case for President Trump's reelection that the confirmations of Justices Neil Gorsuch and Brett Kavanaugh "didn't really tip" the balance of the Supreme Court as they emphasize the importance of a second Trump term for more judicial nominations.

The book, titled "Trump: America First" will come out next Tuesday, the day of the first presidential debate between Trump and Democratic challenger Joe Biden. It recounts the Trump presidency according to Lewandowski, Trump's former 2016 campaign manager, and Bossie, a pro-Trump political operative.

In one chapter, the authors address the efforts of Trump and Senate Majority Leader Mitch McConnell, R-Ky., to fill the Supreme Court and federal judicial vacancies with hundreds of lifetime-appointed judges. But they say Trump needs a second term to make a lasting impact on the Supreme Court.

"The fights to confirm Gorsuch and Kavanaugh were important. But in the end, those two justices didn't really tip the balance of the Supreme Court," Bossie and Lewandowski say in their book, which was written before the death of Justice Ruth Bader Ginsburg. "Gorsuch replaced Scalia, who was one of the most conservative justices ever to sit on the bench, and Kavanaugh replaced eighty-two-year-old Anthony Kennedy, which moved that seat slightly to the right."

They add: "There is a four-four split on the court with the chief justice [John Roberts] tending to align with conservatives on some issues. Neither Eighty-two-year-old Stephen Breyer... or eighty-seven-year-old Ruth Bader Ginsburg... will probably serve on the court another full presidential term. A second Trump term would mean altering the Supreme Court for generations to come. Likewise, a Joe Biden term would mean the same thing -- but an entirely different outcome."

"That's how important the 2020 election is," Bossie and Lewandowski write.

Bossie and Lewandowski, during the upcoming confirmation battle, which is set to be one of the nastiest political skirmishes in recent American history, will be working between the Trump campaign and outside groups in support of the eventual Trump nominee.

In an interview with Fox News about the book, which came after the news of Ginsburg's death, Bossie and Lewandowski emphasized the importance of the upcoming fight over Ginsburg's seat. Republicans have said they will hold a Senate vote on a Trump nominee while Democrats have sworn they will fight tooth-and-nail against whoever Trump names and have threatened to pack the Supreme Court in retaliation if they take the Senate and the White House in November.

In this Feb. 5, 2019, file photo, Supreme Court Associate Justices Neil Gorsuch, left, and Brett Kavanaugh watch as President Donald Trump arrives to give his State of the Union address. Trump has an opportunity to add a third justice to the Supreme Court after the death of late Justice Ruth Bader Ginsburg. (Doug Mills/The New York Times via AP, Pool)

"The current fight over the Supreme Court is the seminal moment of President Trump's first term and one of the most important fights of our lifetime," Bossie said. "A successful confirmation battle will mobilize conservatives across the country."

Lewandowski warned about the chance of post-election litigation that could decide the presidency and said it is important for the Supreme Court to have all nine justices if it is called upon to essentially decide the outcome of the election as it was in 2000 with Bush v. Gore.

"We urgently need the Supreme Court to have nine justices ahead of the election," he said. "It would be a disservice not to have a full court, so Senate needs to confirm whoever President Trump nominates before Election Day."

If there is election litigation that goes to the Supreme Court and eight justices are evenly divided, the ruling would automatically default to whatever the lower court ruling below was.

Democrats have said Republicans are acting with rank hypocrisy in moving to fill the Ginsburg seat after in 2016 holding open the seat of late Justice Antonin Scalia for months before that year's presidential election, saying at the time the American people should have a say in who got to choose the next justice.

"The stakes of this election, the stakes of this vacancy, concern no less than the future of fundamental rights for the American people," Senate Minority Leader Chuck Schumer, D-N.Y., said on the Senate floor Monday. "All the rights enshrined in our Constitution that are supposed to be protected by the Supreme Court of the United States. All the rights that could be undone or unwound by a conservative majority on the court."

"If you care about these things and the kind of country we live in, this election and this vacancy mean everything," Schumer said. "By every modicum of decency and honor, Leader McConnell and the Republican majority have no right to fill it."

Republicans have argued that things are different this time because the presidency and the Senate are in the same party's hands -- voters chose a divided government in 2014 and a unified one in 2018, they say, so each time they were carrying out the will of the people. Some on the right, including Senate Judiciary Committee Chairman Lindsey Graham, R-S.C., simply say any procedural courtesies the GOP would have extended to Democrats are out the window after what they did during the 2018 confirmation of Kavanaugh. Bossie said he agrees.

"We haven't forgotten the Democrats disgraceful behavior during the Kavanaugh hearings, which serves as a low point in confirmation history," he said. "Senate Republicans are right to move forward and confirm the president’s nominee without delay."

In an interview hours before Ginsburg's death, Bossie said Trump's 200-plus federal judicial lifetime appointments and two Supreme Court justice appointments would be "a legacy that President Trump leaves to future generations of Americans." If Trump and Senate Republicans successfully confirm another justice -- although Trump has yet to select a nominee, it appears they have the votes to do so -- that legacy will grow further.

Democrats, however, say that legacy is one of hypocrisy and ill-gotten gains.