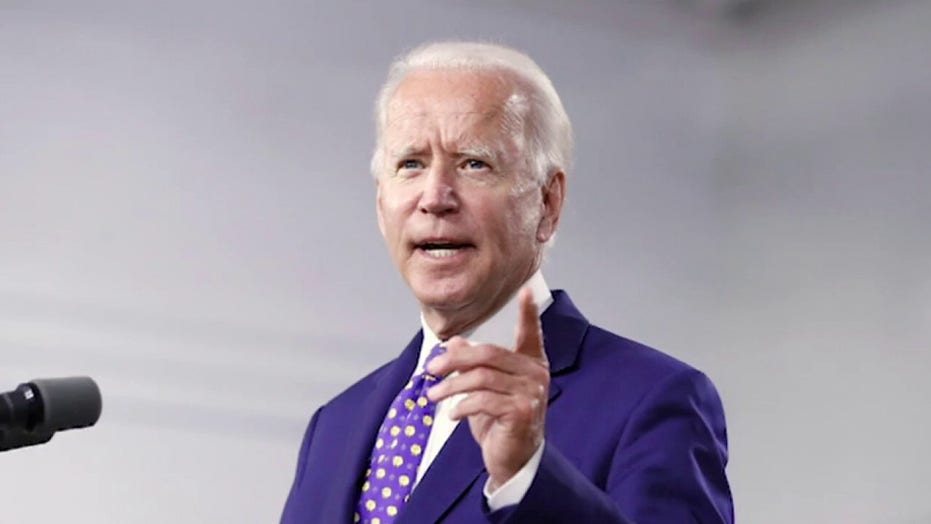 Biden: We need to de-escalate, not escalate

Some Democrats warn of eliminating filibuster and packing the Supreme Court; reaction and analysis from Fox News contributor Richard Fowler.

Joe Biden’s lead in the presidential race hasn’t changed all that much since he surged to the nomination, and the last few days help explain why.

The former veep has refused to be heavily drawn into the issue that has fired up Washington, Twitter, the press and liberal Democrats everywhere: the sudden Supreme Court vacancy.

Biden leads President Trump by about 6 points in the Real Clear Politics average, a bit tighter than the margin that has mostly hovered around 8 or 9 points while occasionally stretching into double digits (and yes, some battleground states are even more competitive).

PRESS POUNDS REPUBLICANS ON COURT VACANCY, BUT HYPOCRISY IS WIDESPREAD

Now some of this can be explained by the fact that Trump, who dominates the news, and Biden, who’s been in politics for 47 years, are so well known. The public view of both men is pretty much set in stone, except for a shrinking core of undecideds who, in a half-dozen states, will probably decide the election.

But in the wake of Trump’s rush to fill the seat held by Ruth Bader Ginsburg--an effort that became a certainty with Mitt Romney’s support yesterday--Biden stood his ground.

It might have been tempting to launch a hair-on-fire crusade against Trump’s move, given that Biden worked with Barack Obama in a failed attempt to push Senate Republicans into voting on Merrick Garland.

And yet when Biden gave a nearly half-hour speech in Wisconsin on Monday, he didn’t even mention the Supreme Court.

“It was the clearest sign yet of Biden’s belief that most voters are not animated by the divisive fight that is consuming many in Washington,” says the Washington Post.

I’m not sure that calculation is correct, but I know that Biden is selling himself as a calm and measured dealmaker who would usher in a return to normalcy.

Here is how he asked Mitch McConnell and company not to push through a Trump nominee six weeks before the election:

“Action and reaction, anger and more anger, sorrow and frustration at the way things are in this country now politically. That’s the cycle that Republican senators will continue to perpetuate if they go down this dangerous path.” He urged the GOP lawmakers to “de-escalate,” to “follow your conscience” and “don’t go there.” Which had precisely zero impact.

It’s now clear that Biden gauges his impact on the news cycle, as when Green Bay station WBAY asked him about the court vacancy.

“It’s a legitimate question, but let me tell you why I’m not going to answer that question. Because it will shift the focus. That’s what he wants. He never wants to talk about the issue at hand and he always tries to change the subject. Let’s say I answer that question, then the whole debate’s going to be about what Biden said or didn’t say, Biden said he would or wouldn’t.”

And that’s true. Biden would have made headlines, Trump would have responded, and the Democratic nominee would have seemed like just another combatant in the swamp.

And beyond that, he would have lost. Trump is going to get his nominee, most likely Amy Coney Barrett, on the high court once he announces his pick on Saturday. Biden would have wasted his political capital.

His one foray into SCOTUS politics has been to remind voters that ObamaCare is pending before the high court, raising the prospect of people losing insurance in the midst of a pandemic that remains his top issue.

Nor has Biden joined the likes of AOC, Joe Kennedy and Ed Markey--not to mention Jeff Toobin and Don Lemon--in calling for the Democrats to neutralize Trump’s third justice by adding court seats if they take over next year.

“For progressives,” says Politico, “court-packing may be the new Medicare for All.

“Joe Biden is on record as opposing both reforms.”

Court-packing isn’t exactly a reform, but a partisan power grab that some Democrats now see as justified in light of the GOP’s hardball tactics. Biden hasn’t joined that chorus, and said over the summer he’s opposed to packing the court. A creature of the Senate, he doesn’t like shattering institutional norms.

This feels like an echo of the Democratic primaries, when liberal commentators bashed Biden for refusing to back Bernie’s government-run health care or, later, the defund-the-police movement. Biden doesn’t excite the base, to be sure, but it takes discipline to resist jumping on the latest left-wing cause.

And that’s why the race has been remarkably stable.