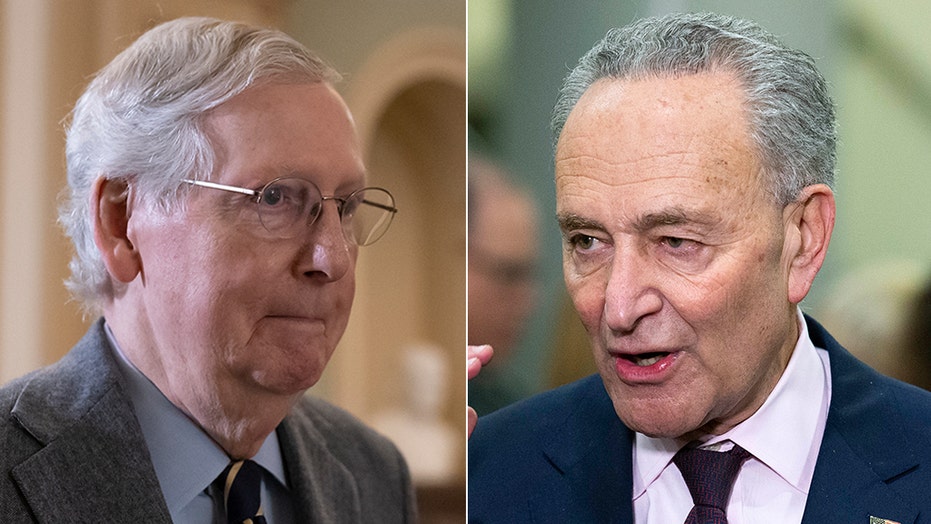 Senate Majority Leader Mitch McConnell, R-Ky., on Monday warned that Democrats will try "every conceivable dirty trick" to prevent a President Trump nominee from being confirmed to the Supreme Court before this year's presidential election as a Senate Minority Leader Chuck Schumer, D-N.Y., said that Republicans have "no right" to fill the vacancy created by the death of late Justice Ruth Bader Ginsburg.

He added: "Two years ago a radical movement tried to use unproven accusations to ruin a man's life because they could not win a vote fair and square. Now they appear to be readying an even more appalling sequel."

Senate Majority Leader Mitch McConnell and Senate Minority Leader Chuck Schumer took to the Senate floor on Monday to fire the opening salvos of what is expected to be a historically nasty battle over the seat of late Justice Ruth Bader Ginsburg. (AP)

Schumer shot back in his own remarks: "The stakes of this election, the stakes of this vacancy, concern no less than the future of fundamental rights for the American people. ... All the rights enshrined in our Constitution that are supposed to be protected by the Supreme Court of the United States. All the rights that could be undone or unwound by a conservative majority on the court."

"If you care about these things and the kind of country we live in, this election and this vacancy mean everything," Schumer said. "By every modicum of decency and honor, Leader McConnell and the Republican majority have no right to fill it."

The fight to replace Ginsburg on the Supreme Court is likely to be one of the nastiest political skirmishes in recent American political history, and McConnell and Schumer on Monday aimed to set the tone for the months ahead.

The leaders each came out with statements within hours of Ginsburg's passing -- Schumer saying that whoever wins the presidential election in November should replace the late justice and McConnell swearing that a nominee from President Trump will get a floor vote in the Senate.

Schumer doubled down on his declaration over the weekend by declaring that "nothing is off the table" for a potential Democratic Senate majority in 2021 if Republicans force through a Trump nominee before the election or while he is a lame duck. And besides that hardline stance, Schumer also sought to appeal to the conscience of potential GOP swing senators by asking them to respect Ginsburg's reported last wish that she be replaced by whoever wins the presidential election on Nov. 3.

No amount of sophistry can change what McConnell said then. And it applies even more so now.

"And we only need two more senators to say that they will abide by RBG's wish, two have already said it," Schumer said Sunday in front of the high school in Brooklyn where Ginsburg graduated. "We need two more. So Americans, if you care about all these rights, if you don't want big, powerful, wealthy special interests to turn the clock back 100 years, even, please, our fervent plea, our fervent wish is that you call your senator and say abide by the wishes of this saintly, brilliant, caring woman and let it wait."

Republicans in 2016 held open the seat of the late Justice Antonin Scalia for months before the presidential election, saying that the voters should have a say in who nominates the next justice. Democrats said that the Senate had a duty to at least hold hearings for the nominee, D.C. Circuit Court of Appeals Judge Merrick Garland.

Now, the roles are reversed, with Democrats saying the vacant seat should be held open until at least after the presidential election while Republicans are bulldozing ahead. There are accusations of hypocrisy flying on both sides, with Democrats, in particular, saying Republicans should live by the precedent they set.

McConnell said that Republicans should proceed to fill vacant Supreme Court seats based on comments Schumer made himself in 2018.

"Ironically, it was the Democratic leader who went out of his way to declare the midterm 2018 elections a referendum on the Senate's handling of the Supreme Court," McConnell said. "In his final speech before Justice Kavanaugh was confirmed, he yelled, literally yelled, over and over at the American people to go vote ... unfortunately for him, many Americans did just that. After watching the Democrats' tactics voters grew our majority and retired four of our former colleagues who had gone along with their party's behavior."

He added that Justice John Paul Stevens' 19-day confirmation process could happen twice before the presidential election and that Ginsburg's could easily fit in before the end of this current Senate in January. "The Senate has more than sufficient time to process the nomination," McConnell said.

Schumer continued in his Monday remarks to say that "it's obvious why [McConnell] is so, so defensive" defending why Republicans are on the level in proceeding to fill the vacancy. "No amount of sophistry can change what McConnell said then. And it applies even more so now."

McConnell, however, says that things are different in 2020 compared to 2016, and Republicans would be consistent to push ahead with the nomination.

Senate Judiciary Committee Chairman Lindsey Graham, R-S.C., had a more blunt calculus, saying that things changed after Democrats' behavior during the nomination of Justice Brett Kavanaugh. He shared an NBC News article that quoted him as saying "After Kavanaugh, the rules have changed as far as I'm concerned."

Monday is just the beginning of the battle over Ginsburg's seat. President Trump said that he hoped to have a vote on a nominee before the presidential election on Nov. 3, which would represent a very accelerated timeline for how long Supreme Court confirmations have taken in recent years.

Trump has yet to name a nominee but says he will do so either Friday or Saturday after services honoring Ginsburg have wrapped.