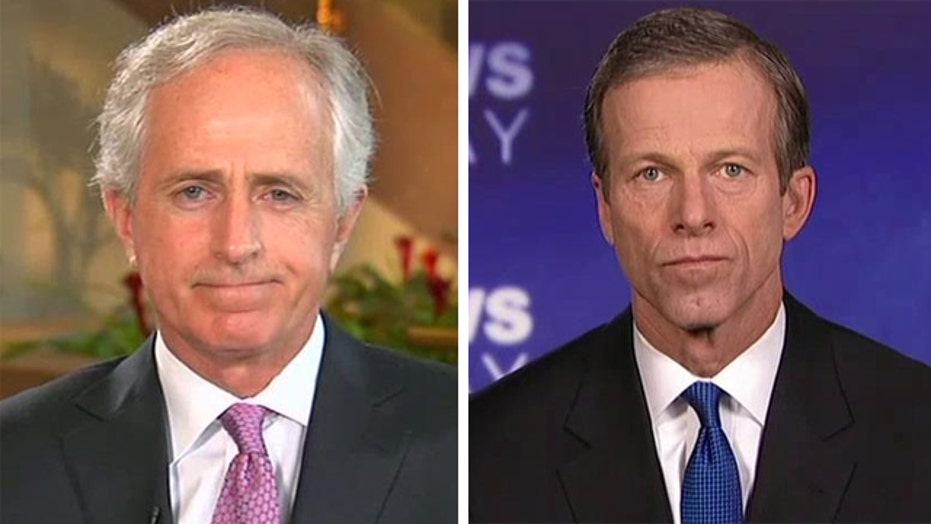 GOP agenda for 2015: cooperation or confrontation?

Senate Republicans on Sunday, just hours from taking control of the chamber, suggested a willingness to work with President Obama on job growth and other key issues but also said he must meet them halfway.

“There are a lot of areas where we can work together right out of the gate,” South Dakota GOP Sen. John Thune told “Fox News Sunday.” “You always enter a new session of Congress with high hopes…We want to see solutions for the American people. And we hope the president will meet us there.”

Thune, the incoming chairman of the Senate Committee on Commerce, Science and Transportation, said Republican leadership has set an early goal of trying to pass legislation with bipartisan support, such as a bill to complete the Keystone XL pipeline.

Though Senate Republicans seem optimistic about passing Keystone swiftly to perhaps set the tone for the entire session, Thune hinted that Obama and fellow Democrats might define the direction in Washington if the legislation doesn’t pass with a veto-proof majority and if the president fails to sign the bill.

Thune also made clear that Senate Republicans will not shut down the Department of Homeland Security, whose funding expires in February, over differences with Obama about immigration reform, particularly his use of executive action to delay deportation for millions of immigrants now living illegally in the United States.

However, he said congressional Republicans would use “the power of the purse to challenge the president."

He told CNN’s “State of the Union” that voters continue to elect candidates from both parties because they want government that “gets things done in the political center, things that both sides can agree on.”

McConnell said both sides would “talk about the things where there may be some agreement.”

But he made clear that Obama is “not going to like” some of the bills that will now reach his desk -- likely including Keystone, rolling back environmental restrictions and repealing parts of ObamaCare.

He also said Americans “want us to look for things to agree on and see if we can make some progress for the country," comments similar to those he made after nearly losing a re-election bid in November.

"We look forward to that opportunity," said Corker, who becomes chairman of the Senate Foreign Relations Committee.

However, Corker said Congress must have a bigger role in negotiating with Iran to end its apparent pursuit of a nuclear weapon.

“This is one of the biggest issues we'll be dealing with,” he said. “And for Congress not to have a role is totally inappropriate.”

He said that without question more sanctions will be imposed on Iran if the existing deal falls apart.

Corker also said that Congress, like Obama, realizes that changes must come to the U.S. prison facility in Guantanamo Bay, Cuba, but suggested the president has only a piecemeal plan, which included transferring 28 detainees out of the facility last year.

However, he did not say whether congressional Republicans would try to block an attempt by the president to shutter the facility.

“If he tries to close it on his own, we'll see,” Corker said.