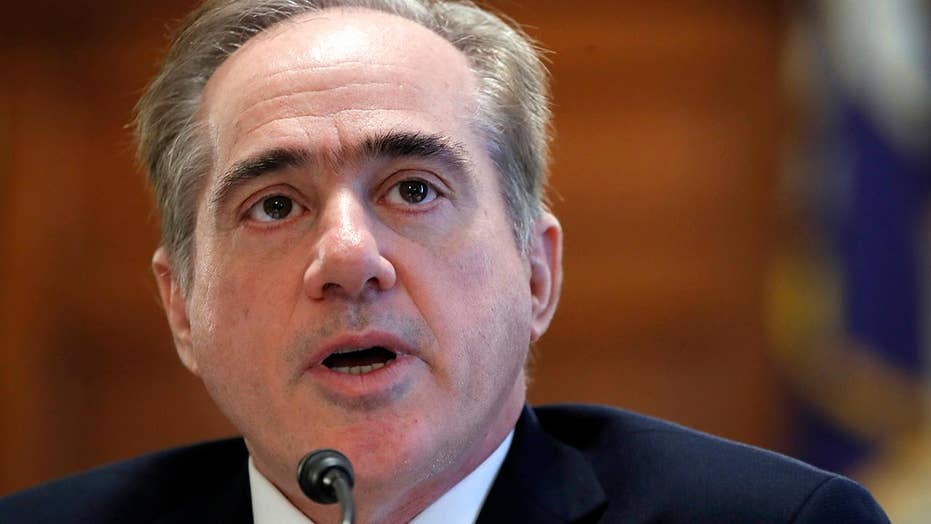 A Republican member of the House Veterans Affairs Committee called on VA Secretary David Shulkin to resign Wednesday after an internal investigation found Shulkin had improperly accepted Wimbledon tennis tickets and charged taxpayers for his wife's airfare during a European trip last summer.

"It's exactly corruption and abuses like this that doesn't help our veterans," Coffman tweeted, adding "[President Trump] ran on accountability, it starts here."

The 87-page report by the VA's internal watchdog said Shulkin should reimburse the government more than $4,000 for his wife's airfare and accused his top aide of doctoring emails to falsely represent that Shulkin as being honored in Denmark, inventing a rationale for his wife's free travel.

"The investigation revealed serious derelictions" by Shulkin and his staff, said the report, which cited "poor judgment and/or misconduct."

The chairmen and ranking members of the House and Senate Veterans Affairs committees issued a joint statement saying they were "disappointed by the details" of the report, but stopped short of calling for Shulkin to step down.

"We believe that public officials must be held to a higher standard, and whether intentional or not, misusing taxpayer dollars is unacceptable," the statement read.

Sen. Jon Tester, D-Mont., the top Democrat on the Senate Veterans Affairs Committee, told reporters that the report was "very troubling" and indicated "that people screwed up."

"Whether that's the secretary or people below him, it's obvious that people made some bad decisions," Tester added.

In a response attached to the report, Shulkin said he did nothing improper and he attacked the investigation as containing the "thread of bias."

"A report of this nature is a direct assault on my spouse, my character, and my unblemished record of service to the Veterans Affairs Administration," he wrote.

Shulkin said will he consult with the agency's general counsel and reimburse the costs for his wife's airfare and the Wimbledon tickets if advised to do so.

"Accountability and transparency are important values at VA under President Trump," agency spokesman Curt Cashour said in a statement, "and we look forward to reviewing the report and its recommendations in more detail before determining an appropriate response."

The findings are the latest in a series of controversies involving expensive or wasteful plane travel by top Trump administration officials. President Trump's health secretary, Tom Price, resigned in September after questions arose about his use of private jets for multiple government trips.

Shulkin's overseas trip may have involved too much leisure time at taxpayers' expense, according to the report by the VA's inspector general, Michael Missal. It found that VA ethics officials should not have approved the commercial airfare for Shulkin's wife, Merle Bari, and they did so only after Shulkin's chief of staff, Vivieca Wright Simpson, altered emails to make it appear he was receiving an award to justify his wife's traveling on the public's dime.

The inspector general said that "since Ms. Wright Simpson's false representations and alteration of an official record may have violated federal criminal statutes," it referred the matter to the Justice Department, which decided not to prosecute.

The report called on the VA to take "appropriate administrative action" against Wright Simpson, and the agency said it was reviewing the matter.

An 11-member VA delegation, including Bari and six members of Shulkin's security detail, traveled to England and Denmark last July, at a total VA cost of at least $122,334, according to the report. The trip included a tour of Westminster Abbey, attendance at the women's final at Wimbledon featuring American Venus Williams and a cruise on the Thames River.

Missal called on Shulkin to reimburse $4,312 paid by the Department of Veterans Affairs for Bari's travel costs as well as the price of the Wimbledon tickets. He received the seats as a gift from a professional acquaintance, Victoria Gosling, a former CEO of the 2016 Invictus Games, and then misrepresented to the news media that the gift had been pre-approved by ethics counsel. In fact, his acceptance of Wimbledon tickets had not been reviewed.

The inspector general began a review in October after The Washington Post reported that Shulkin and his wife had spent nearly half their time on personal activities during the European trip. The VA said the two flew commercially, and the taxpayers covered her airfare as part of "temporary duty" travel expenses.

But the audit found the trip may have violated a cost-saving directive that Shulkin had issued to the department weeks prior to the trip to avoid unnecessary expenses.

As to the Wimbledon tickets, Shulkin told investigators that he accepted the tickets from Gosling, whom he described as his wife's friend, after he unsuccessfully attempted to purchase tickets himself. After further questioning, the IG's office learned that Gosling could not even recall the name of Shulkin's wife.

Shulkin's lawyers described the Europe trip as an important opportunity to discuss "best practices" with U.S. allies for veterans' health care. They said Shulkin and his wife acted appropriately in taking advantage of suitable "down time" in between scheduled business meetings and paid for their tickets to local attractions.

Shulkin insisted he had planned to pay for his wife's airfare but considered the VA reimbursement only after staff suggested the idea.

The trip included a weekend during which Shulkin and his wife did sightseeing. According to VA, it was unclear whether scheduling two separate trans-Atlantic trips to avoid the four-day gap between work-related events would have saved money.

After the Post report last September, the VA began posting Shulkin's travel itineraries and any use of private or government aircraft.

Shulkin isn't the only Cabinet member to have faced questions about travel since Price resigned.

Others include Interior Secretary Ryan Zinke, Energy Secretary Rick Perry and EPA chief Scott Pruitt, who have acknowledged the use of government or private flights costing tens of thousands of dollars. Zinke and Pruitt are being investigated by their respective department's inspector general for their trips, which they said were pre-approved by ethics officials. Perry also has defended his travel as pre-approved.

Pruitt this week broke a long silence about his frequent use of premium-class airfare at taxpayer expense, saying he needs to fly first class because of unpleasant interactions with other travelers.

Treasury Secretary Steven Mnuchin also was investigated for use of government aircraft for official trips. A Treasury audit last October said he failed to provide enough proof of why he needed to use more expensive modes of travel but there was no violation of law.