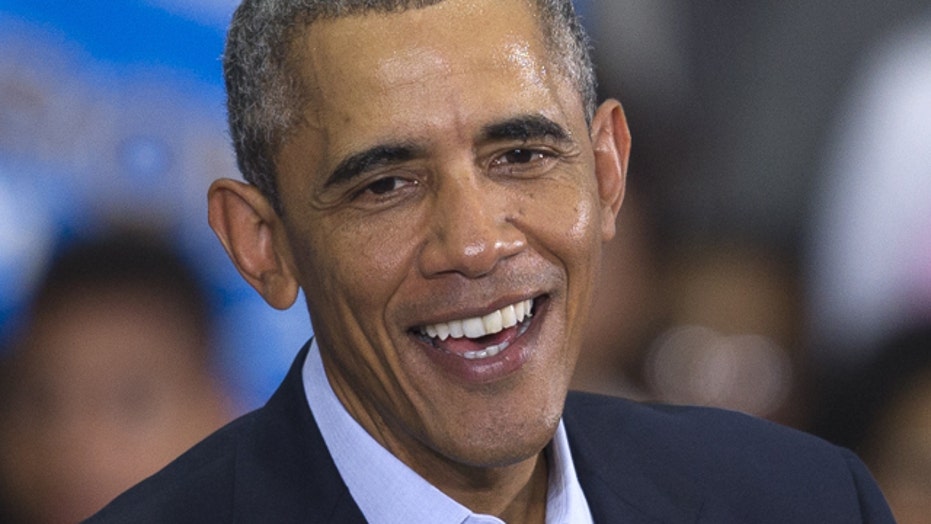 President Obama won’t let embattled Senate Democrats run away from him that easily.

The president, during a radio interview on Monday, claimed Democratic candidates who are avoiding him on the campaign trail nevertheless are “strong allies” who have “supported my agenda in Congress.”

The comments once again provide GOP ad-makers with fodder to tie Democrats to the unpopular president. This comes after Obama declared several weeks ago “every single one” of his policies is on this year’s ballot. And like last time, Republicans quickly parroted the president’s latest remarks.

“All of the Dem candidates running from Obama ‘are all folks who vote with’ & ‘have supported’ his agenda,” Republican National Committee Chairman Reince Priebus tweeted, as his press shop dutifully circulated Obama’s comments.

The president addressed the issue on Al Sharpton’s radio show, as he tried to explain why he was staying away from some races.

“A lot of the states that are contested this time are states that I didn’t win,” Obama said. “And so some of the candidates there — it is difficult for them to have me in the state because the Republicans will use that to try to fan Republican turnout.”

He added: “The bottom line is, though -- these are all folks who vote with me, they have supported my agenda in Congress.”

He listed several agenda items, from minimum wage increases to infrastructure spending, and said Democrats were on the “right side” of those debates, with him.

“This isn’t about my feelings being hurt,” Obama said. “These are folks who are strong allies and supporters of me.”

Several embattled Democrats, though, not only won’t be seen with the president but won’t acknowledge whether they even voted for him.

In Kentucky, Democrat Alison Lundergan Grimes repeatedly refused to say whether she voted for Obama, to the derision of Republicans and some in the media.

Obama’s comments on how closely tied Democratic candidates are to him already have been used against Democratic candidates. In the Kentucky race, GOP Leader Mitch McConnell’s campaign put out an ad earlier this month highlighting Obama’s remarks about his policies being on the ballot.