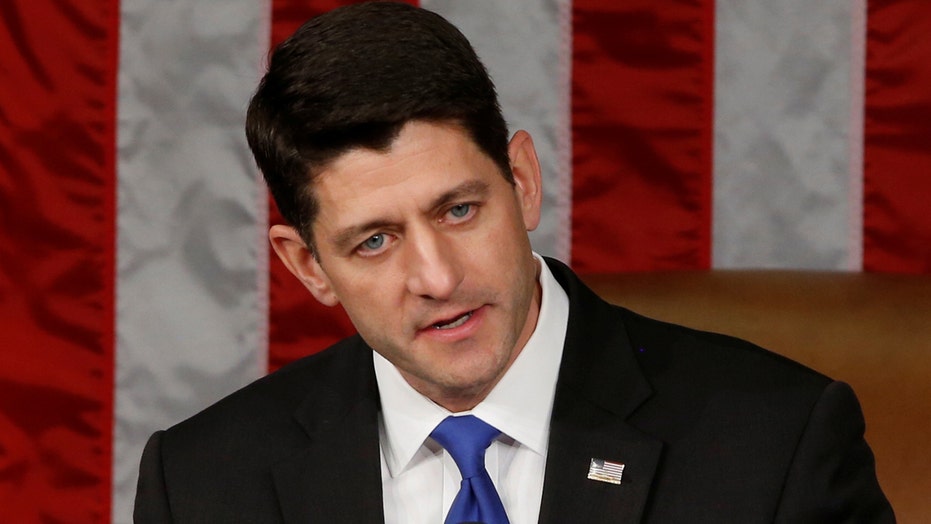 Speaker Ryan: We are all united by a love for our country

Twelve is an important number when it comes to Congressional spending.

And when it comes to President Trump’s border wall with Mexico, the number 13 could emerge as even more crucial.

At their retreat this week in Philadelphia, congressional Republicans declared they plan to write a “supplemental appropriations bill” to cover the construction of a border wall with Mexico.

Of course, there’s now a firestorm as Mexican President Enrique Pena Nieto says his country won’t pay for the wall. As a result, the Trump administration suggested to Nieto it would be best to bag a planned meeting next week between the leaders. Nieto took the president’s offer and will stay home, though Trump later said they “agreed” to do so.

Rep. Will Hurd., R-Texas, represents 800 miles of the border with Mexico in his district. The second-term lawmaker is suspect of the entire wall concept.

“It is impossible to build a physical wall in much of (this) terrain. Big Bend National Park and many areas in my district are perfect examples of where a wall is unnecessary and would negatively impact the environment, private property rights and (the) economy,” he said. “Building a wall is the most expensive and least effective way to secure the border.”

This is what’s clear. A “supplemental” spending bill is an extra measure in the annual appropriations process.

To best understand this, let’s head to the kitchen.

Think of a pie, sliced into 12 uneven pieces. Those slices represent the 12 annual spending bills that Congress must approve to fund the federal government each year. The largest pie slice pays for the Pentagon.

In fact, the military piece constitutes nearly half the entire pie. The smallest slice funds the legislative branch. In between are pie pieces that fund Commerce, Justice & Science programs, the Departments of Labor and Health & Human Services, the Department of the Interior and so on.

Congress must pass all of those bills by September 30, the end of the government’s fiscal year. If not, the government shuts down. Sometimes, just that section (or a pie slice) of the federal government shutters if Congress and the president failed to reach accord on an individual bill.

But here’s the rub. A “supplemental” bill is just that. You have the annual appropriations pie divided into 12, unequal pieces. And then across the counter on another plate is an additional, standa-lone slab of pie,  – which wasn’t cut from the original pie. The piece could be rather slim, or a chunk with fruit filling spilling out of the crust.

Congress typically approves a supplemental appropriations bill (or a “supp,” in Capitol Hill speak) when lawmakers need money for emergency programs outside the bounds of the original spending pie. A “supp” is often necessary after a national crisis (like September 11th), wars or natural disasters.

Congress repeatedly approved multiple supplemental-spending bills to fund the wars in Afghanistan and Iraq after 9/11. The money appropriated in a supplemental bill is “real” and does in fact contribute to the national debt.

And here’s an interesting factoid. Money allocated on an emergency basis in a “supp” isn’t subject to otherwise mandatory spending caps applied to conventional legislation. But if this additional bill is just an “extra” measure (lacking the “emergency” designation), the dollars do count against the caps.

This new money isn’t off the books. But Congress doesn’t constrict emergency supplemental spending the way it does garden variety spending.

Congress engineered a major package to hike the debt ceiling in the summer of 2011.

Since then, Congress operated under spending caps known as “sequestration.” In essence, these caps limited the size of the overall piece and constricted the size of each pie slice. The sequestration budget-limiting measures were supposed to apply only through fiscal 2021 and save $1.1 trillion. However, Congress has routinely kicked the can down the road, adding years to sequestration so lawmakers can spend now. A good example of this came in late 2013.

Then-House Budget Committee Chairman Ryan and Sen. Patty Murray, D-Wash., extended sequestration by two years in their budget accord. Ryan and Murray did this so sequestration didn’t hem in lawmakers on other spending.

McConnell and Ryan repeatedly dodged questions at Thursday’s press conference in Philadelphia about whether they’ll offset the cost of the wall. McConnell said “we intend to address the wall issue ourselves.”

The president argues the wall will cost $10 billion. Some estimates are as high as $25 billion. Consider the fact that the price tag of the original House Pentagon spending bill last year hit $517.1 billion. The U.S. is now $21 trillion in debt. McConnell mentioned a price tag of  $12 to $15 billion. So, $10 to $25 billion is not a lot in federal terms. But it’s also not nothing, either.

The Congressional Budget Office (CBO) this week spelled out some damning figures about the country’s economic outlook if Congress doesn’t soon harness spending.

The federal debt exploded in recent years because Congress spent trillions in the war on terror, Iraq and in Afghanistan. Entitlement spending (which constitutes a completely different pie, which dwarfs our original pie in size) also drives the debt on a yearly basis.

“That’s really going to provide the funding,” he said.

Trump’s spokesman later mopped up those comments, indicating that a levy on services coming across the border with Mexico was just a possible method of paying for the wall.

But the question is whether conservative lawmakers (many of whom are pro-trade) will tolerate additional spending. A border wall sounds nice to constituents back home. But they also balk at extra spending.

“I generally don’t vote for anything that’s not offset,” said Sen. Jim Risch, R-Idaho. “Everything needs an offset.”

Rep. Mark Meadows, R-N.C., who leads the conservative House Freedom Caucus, says he opposes tariffs like the one Spicer mentioned. However, he also expected construction of the wall to be “fiscally sound.” Still, even Meadows slightly cracked the door open to conservatives not requiring immediate offsets to construct the wall.

“I know that we’re committed to making sure the funds and resources are there,” he said in Philadelphia.

It will be interesting to watch how budget hawks in Congress tangle with the wall’s cost.

An internal debate now rages among Republicans as to how they cut taxes, add tens of billions to the debt by repealing ObamaCare, bulking up the military and engineering a robust infrastructure bill - all while slashing federal spending.

Moreover, a 2015 pact between then-House Speaker John Boehner, R-Ohio, and then-President Obama suspended the debt ceiling (the total amount of red ink the US can carry at any one time) until mid-March.

It’s thought that the Treasury Department and Congress really don’t have to address the debt ceiling problem until late spring or summertime. But this creates a really messy traffic jam ahead. It will be tough for lawmakers to approve new spending - and simultaneously vote to raise the debt ceiling. A vote to hike the debt limit is one of the most toxic roll call tallies a member of Congress can take. And if Congress doesn’t increase the debt limit, the bond market and global exchanges could melt down.

How do they balance the books doing this? Good question.

“The same Republicans who howled ‘fiscal responsibility’ when it comes to investments to help working families are apparently willing to light billions of taxpayer dollars on fire and add to the federal deficit in order to build Trump’s useless border wall,” said Drew Hammill, a spokesman for House Minority Leader Nancy Pelosi, D-Calif.

“The wall is a multi-billion dollar boondoggle in the making, and Republicans should be embarrassed about their brazen hypocrisy in enabling it.”

For more than a decade now, Congress has struggled to just knife through the annual appropriations pie and pass all 12 individual slices to fund the government. Instead, lawmakers resort yearly to okaying an entire pie at once -- without full agreement on the individual pieces.

Yet congressional Republicans insist they’ll approve that “13th” spending bill for the wall. A baker’s dozen. Even if they again stumble doing the other pieces of the pie.

It wasn’t very long ago that many Republicans opposed the wall. But things are different now.