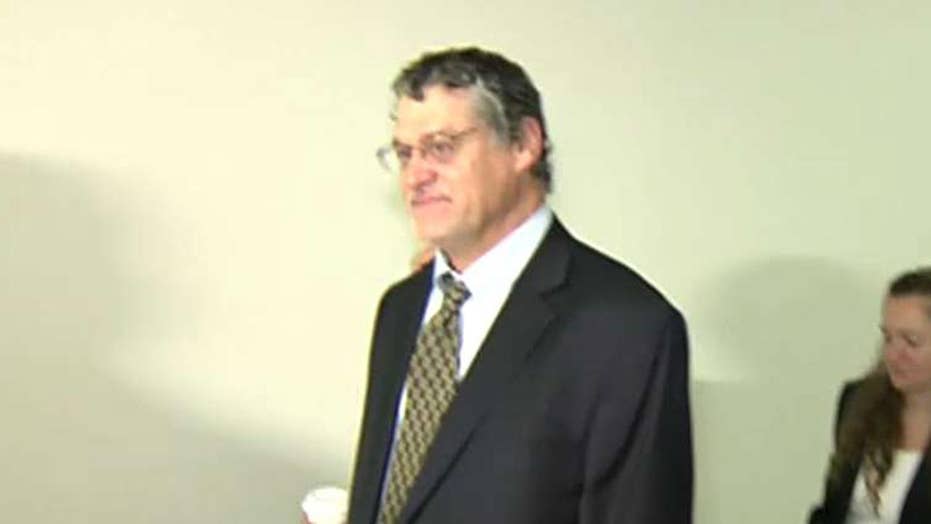 Glenn Simpson – the co-founder of the Fusion GPS research group that commissioned the unverified, Democrat-funded anti-Trump dossier – on Tuesday invoked his Fifth Amendment right not to testify during an appearance before the House Judiciary Committee.

On Capitol Hill, Simpson declined to answer multiple shouted questions from Fox News about his refusal to testify as he arrived to the committee room.

But Simpson’s lawyer, Joshua Levy, on Tuesday took aim at Republican lawmakers for compelling him to appear.

"This committee would make Sen. Joseph McCarthy proud," Levy said. "Like Sen. McCarthy, this committee has largely conducted its business through secret, confidential interviews and depositions, binding witnesses and their counsels into silence while the members walk outside to all of you the media with public and selectively leaked interviews to tell you what they want you to hear."

"You can't just invoke the fifth in order to avoid questions before Congress," Meadows said.

The dossier, authored by former British spy Christopher Steele and commissioned by Fusion GPS, was paid for by the Democratic National Committee and Hillary Clinton's presidential campaign through law firm Perkins Coie. It included salacious and unverified allegations about Trump's visit to Russia before he was president and has become a central focus as lawmakers investigate the origins of the Russia investigation.

Simpson’s refusal to testify comes as other key figures connected to the dossier have been called to testify on Capitol Hill this week, as the House investigation into Justice Department actions during the 2016 campaign comes to a head.

A deposition is also scheduled for Thursday with James A. Baker, the FBI’s former top lawyer. Baker, who had a close working relationship with former FBI Director James Comey, left the bureau earlier this year.

Earlier this month, Baker testified about the genesis of the bureau’s Russia investigation, sources close to a congressional investigation told Fox News. He also testified that Perkins Coie lawyer Michael Sussmann gave him documents pertaining to the Russia probe, suggesting another connection between the early stages of the FBI’s Russia probe and those working with the DNC and the Clinton campaign, the sources said.

House Republicans have also scheduled a deposition for Friday with Nellie Ohr, a Russia researcher for Simpson’s company. Ohr is married to Bruce Ohr, a Justice Department official who has also testified about his contact with Simpson during the campaign.

“Is it really possible that Bruce Ohr, whose wife Nellie was paid by Simpson and GPS Fusion for work done on the Fake Dossier, and who was used as a Pawn in this whole SCAM (WITCH HUNT), is still working for the Department of Justice????? Can this really be so?????” President Trump tweeted Tuesday.

Baker and Ohr are appearing for voluntary depositions, which take place as transcribed interviews under oath.

The dossier, which has been at the center of an intense power struggle between congressional Republicans and the FBI, specifically cites the DOJ and FBI’s surveillance of Trump campaign adviser Carter Page, saying the dossier "formed an essential part" of the application to spy on him.

Fox News learned Monday that Page has filed suit in Oklahoma against the DNC, as well as the law firm Perkins Coie, and its principals Marc Elias and Sussman over the dossier, and what Page claims were “slanderous” and “libelous” statements.

"It goes beyond any damages or any financial aspect," Page told Fox News' "Hannity" Monday night. "There have been so many lies. You look at the damage it did to our democratic systems and our institutions of government back in 2016, and I'm just trying to get some justice in terms of getting some disclosure."