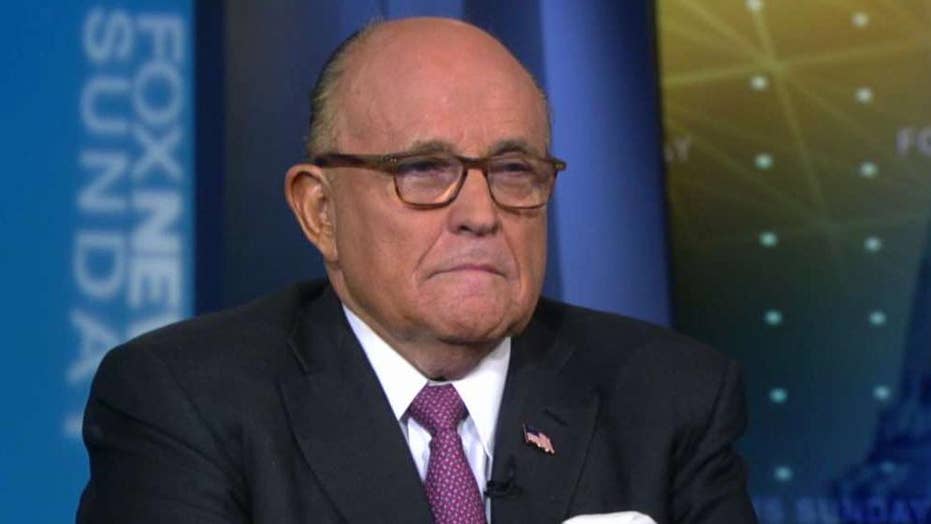 Giuliani noted, however, that "so far we don’t think we need to" release a planned counter-report to Mueller's findings because "we think the public debate is playing out about as well as it can -- why confuse it?"

Speaking minutes later on "Fox News Sunday," House Intelligence Committee chair Adam Schiff, D-Calif., gave another reason for the White House to celebrate by cautioning that whether to begin impeachment proceedings would be a "very difficult decision" that would take "the next couple of weeks" to determine. Ohio Democrat Rep. Tim Ryan also pumped the brakes on impeachment, telling CNN, "the process needs to play itself out."

The Democrats' remarks came as Trump again took something of a victory lap on Twitter on Sunday, writing that "Despite No Collusion, No Obstruction, The Radical Left Democrats do not want to go on to Legislate for the good of the people, but only to Investigate and waste time. This is costing our Country greatly, and will cost the Dems big time in 2020!"

And Trump was shown on video Saturday giving two enthusiastic thumbs-up to supporters as he vacationed at his Mar-a-Lago resort in Florida. (Trump attended an Easter morning service at the Church of Bethesda-by-the-Sea.)

White House social media director Dan Scavino wrote on Twitter: "I am with the President at the Southern White House, I have never seen him happier!"

Although the central finding of Special Counsel Robert Mueller's investigation was that there was no evidence the Trump team had "conspired or coordinated" with Russia to sway the 2016 election, Democrats and left-wing media outlets have pivoted and focused extensively on the portions of Mueller's report that failed to entirely "exonerate" Trump of obstruction-of-justice offenses.

"You do not apply a standard of exoneration to anyone," Giuliani shot back, after saying the standard was "warped" and that the Mueller report was full of "lies" told by disaffected Trump aides.

"Whether it’s a president, an impeachment," Giuliani said, "you can’t exonerate. Exoneration means proving a negative."

In particular, host Chris Wallace pressed Giuliani on a section of the Mueller report outlining how Trump allegedly told then-White House Counsel Don McGahn to inform the acting attorney general that Mueller should be removed in June 2017 -- a demand that McGahn ignored. Trump has strongly suggested that claim was 'bulls---.'"

"If he had fired him, there wouldn’t have been an obstruction," Giuliani began. "So, as long as he was replaced by somebody, which he would have been, and there were good reasons- arguable reasons."

Giuliani insisted that accounts of McGahn's story have changed multiple times and that Trump was merely calling for Mueller's supposed conflicts of interests to be "considered."

Trump has openly suggested Mueller cannot be an impartial investigator because of the circumstances of why he and his family stopped their membership with Trump's Virginia golf course. In a footnote in his final report, Mueller mentioned that he had canceled his membership because he could not make full use of the club and requested a refund, only to be placed on a waitlist to receive the funds.

"You’re treating these people as if they’re fair," Giuliani told Wallace at one point when asked why Trump didn't agree to a sit-down interview with special counsel prosecutors. "They're not."

Elaborating on Mueller's failure to "exonerate" Trump, Giuliani pointed out that prosecutors are tasked with determining whether there is evidence of a chargeable offense, and aren't typically in the business of publicly exonerating anyone -- especially when complex constitutional considerations are involved, and would make such an exoneration difficult in any event.

Giuliani also noted that Mueller's investigation had concluded unimpeded, and that the special counsel had received a flurry of White House documents. No material in Mueller's report was shielded or redacted because of an assertion of executive privilege by the president.

"When did Mueller become God? Mueller says the injury to the justice system is still as great, there was no injury by the way," Giuliani told Wallace. "We’re talking about an inchoate crime. We’re talking about something that didn’t happen. There was no obstruction. Nothing was denied to him, nobody crushed cellphones like Hilary did; nobody deleted 33,000 emails like Hilary’s people did, and nobody bleached a server like Hilary did. There was no obstruction, they don’t point to a single obstruction in their investigation. They went from day one to day end -- they got everything they wanted."

WHY WAS FBI BLOCKED FROM ACCESSING CLINTON FOUNDATION EMAILS DURING CLINTON EMAIL PROBE?

Separately on CNN, Giuliani asserted that "there’s nothing wrong with taking information from Russians" from a criminal law perspective, and that campaign finance law only bars receiving certain "campaign contributions" and "things of value" from foreign nationals.

Members of the Trump team briefly met with Russian-linked individuals who promised information on the Clinton campaign, but the Mueller report found that such contacts could not meet the high bar of a criminal campaign finance violation because there was no evidence the Trump team had knowingly and willfully violated the text of the law.

"You're assuming that the giving of information is a campaign contribution," Giuliani told "State of the Union" host Jake Tapper.

Schiff, for his part, indicated that talks of impeachment are premature.

"I think it's a very difficult decision, and we're going to have a caucus about this over the next couple weeks to try to figure out what the best course is, not for the party, but what's the best course for the country," Schiff said. "I think it's certainly the case that an impeachment would be unsuccessful if the Republican Party continues to place party above country, continues essentially to back the president no matter how unethical or dishonest his conduct may be. And, sadly, that's where we are right now."

Democrats generally appeared to still be split on the issue. Even without seeing the full Mueller report, some Democrats, including New York Democrat Rep. Alexandria Ocasio-Cortez, said they would sign onto an impeachment resolution, and pressed for more investigations. Ocasio-Cortez has previously called for Trump's impeachment, including in a recent viral video in which she struggled at length to find a basis for impeachment, before claiming that Trump's tax cuts could suffice.

"Based on what we have seen to date, going forward on impeachment is not worthwhile at this point," he said. "Very frankly, there is an election in 18 months and the American people will make a judgment." He later walked back that statement and said that all options would be considered.

Schiff also vowed to look into the "genesis" of the counterintelligence probe into the Trump campaign, which relied largely on a discredited dossier funded by Hillary Clinton's campaign and the Democratic National Committee (DNC).

The dossier, written by British ex-spy Christopher Steele, contained a slew of unverified or false claims, according to the Mueller report. Republicans have cited Steele's work as an instance of foreign collusion by the Clinton campaign.

Schiff went on to say he believed the origins of the probe were justified.

The FBI extensively cited the dossier to justify a secret surveillance warrant of former Trump aide Carter Page, who has never been charged with wrongdoing even though the FBI had told the Foreign Intelligence Surveillance Act (FISA) court that he was working with the Russian government. Trump has vowed to declassify and release the entirety of those FISA materials.

The apparent genesis of the Russia probe was an April 2016 meeting by Trump aide George Papadopoulos with Maltese Professor Joseph Mifsud, who promised "dirt" on the Clinton campaign. The Mueller report revealed that Papadopoulos was targeted by U.S. intelligence because of his ties to Israel, and Papadopoulos has suggested Mifsud may have been working with U.S. intelligence to set him up.

“I was actually really impressed and quite frankly shocked that Bob Mueller told the truth about why I was illicitly targeted and it really had nothing to do with Russia. It had to do with my ties to Israel,” Papadopoulos told Fox News.