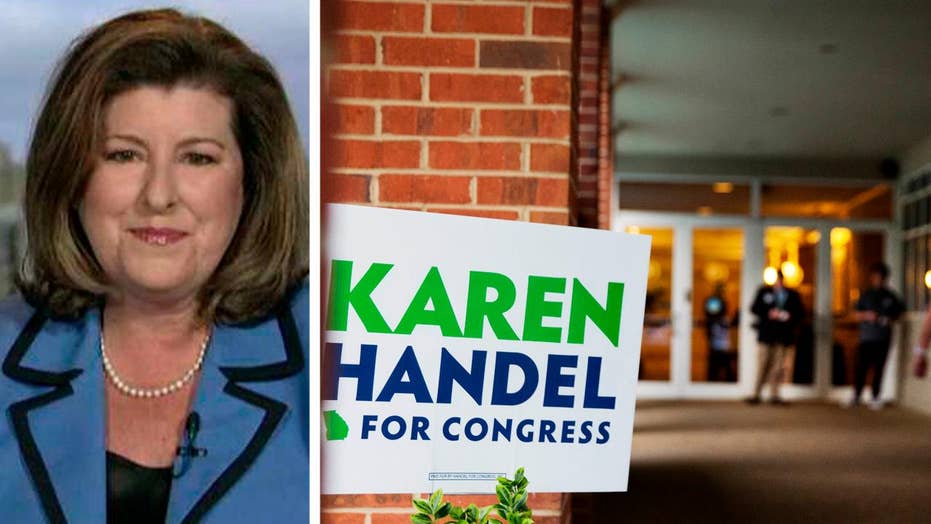 Republican Karen Handel on Georgia race: I will prevail

On 'Fox & Friends,' congressional candidate looks ahead to runoff against Democrat Jon Ossoff

Democrats put their hope in political upstart Jon Ossoff to deliver a rebuke to President Trump in Tuesday night’s Georgia congressional election. It didn’t quite work.

Now, after forcing the front-runner into a June 20 runoff, Republicans are vowing to unite and defeat the Democrats’ chosen candidate in two months.

Trump, who used a robocall and his Twitter account in the contest’s closing days to push Republicans to the polls, taunted Democrats on Wednesday morning, casting the upcoming final contest as “Hollywood vs. Georgia.”

Ossoff was the clear leader once the dust settled in Tuesday’s crowded special election for the Georgia House seat once held by Republican Tom Price, now Trump’s health secretary.

But Ossoff’s haul fell short of the majority threshold required to outright win, despite him getting support from prominent Democrats and celebrities and attracting millions of dollars in outside donations. He raised over $8 million, compared with Handel's roughly $460,000. Under the so-called “jungle primary” system, the top two candidates – Ossoff and Handel – will head into the June runoff.

The two-candidate race immediately changes the dynamics in the contest.

With just two candidates in the race, Republicans are vowing to close ranks behind Handel’s candidacy.

“Republicans are united and ready to do everything we can to elect Karen to Congress,” National Republican Congressional Committee Chairman Steve Stivers said in a statement.

Handel told “Fox & Friends” on Wednesday morning that she’s already spoken to most of her GOP competitors in a push to unite the party.

“This district has a long legacy of Republican leadership,” she said. “What’s at stake here is bigger than any one person, and we will unite.”

She credited Trump with helping get out the vote and vowed, “I will prevail.”

Ossoff is sounding equally confident. At an Atlanta rally Tuesday night, he said, “We will be ready to fight on and win in June if necessary.”

He slammed Republicans for their “dark money” and negative ads – Handel countered that most his funding came from outside the district, and reprised criticism that Ossoff doesn’t even live in the Sixth District.

Ossoff has acknowledged he lives just outside the district, so his girlfriend is closer to work.

The result Tuesday night tees up another hard-fought contest in June likely to draw even more national interest. Some Republicans have suggested Trump could personally campaign in Georgia now that it’s a two-person race, while Democrats plan to keep up the pressure – after falling short in another recent House special election in Kansas.

“Jon Ossoff is in a strong position to become the first Democrat to represent the Georgia 6th in nearly 40 years. And while Republicans have their backs against the wall, Democrats will keep their foot on the gas through Election Day because the residents of Georgia’s 6th district deserve a representative who will fight for them,” he said.