George H.W. Bush's enormous legacy was honored by a procession of dignitaries and family members at Wednesday's state funeral in Washington, with his former president son, George W., capping off the tributes by delivering an emotional and personal eulogy for "a great and noble man."

"We're gonna miss you," the 43rd president said of his father, the 41st president. "Your decency, sincerity and kind soul will stay with us forever."

Bush and his family joined all current and living former presidents, as well as world leaders and other distinguished guests at the Washington National Cathedral.

He choked up in describing “the best father a son or daughter could have.”

Referencing his late mother, as well as a sister who died young, he said: “And in our grief, let us smile knowing that Dad is hugging Robin and holding Mom’s hand again.” 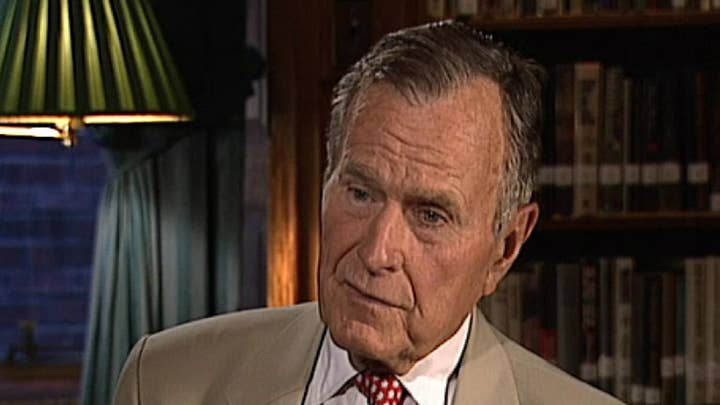 The 43rd president also drew laughter with anecdotes about his father, revealing how Bush confidant James Baker recently secretly brought vodka and steaks into his hospital suite. “To us, he was close to perfect,” he said. “But not totally perfect. His short game was lousy. He wasn’t exactly Fred Astaire on the dance floor. The man couldn’t stomach vegetables, especially broccoli. And by the way, he passed these genetic defects on to us.”

A longtime friend, a fellow world leader and a historian also delivered eulogies for Bush, who served as president, vice president and CIA director and fought in World War II.

“I believe it will be said that no occupant of the Oval Office was more courageous, more principled and more honorable than George Herbert Walker Bush,” former Canadian Prime Minister Brian Mulroney, who served when Bush was president, said.

“In George Bush's theme of life, during all the highs and lows, was a simple credo: what would we do without family and friends?" said former Wyoming Sen. Alan Simpson, a longtime family friend, who made the crowd laugh in a heartfelt tribute with stories about his times with the president.

Simpson added, “He was a man of such great humility. Those who travel the high road of humility in Washington, D.C. are not bothered by heavy traffic."

Cathedral officials told Fox News the cathedral was at full capacity, with approximately 3,000 people in attendance. Members of the Bush family -- Lauren Bush Lauren, Ashley Walker Bush and Jenna Bush Hager -- read lessons from the Bible. The hymns "Praise, my soul, the King of Heaven" and “The King of love my shepherd is” were sung.

Earlier, members of Bush’s family looked on as the former president’s casket was carried down the steps of the Capitol, amid the playing of "Hail to the Chief" and other hymns, for its trek to the cathedral. The motorcade passed by the White House one final time on its way to the service. President Trump has declared Wednesday a national day of mourning.

Despite a rocky history between the Trump and Bush families, President Trump and first lady Melania Trump attended the service. Ahead of the funeral, Trump tweeted, “Looking forward to being with the Bush family. This is not a funeral, this is a day of celebration for a great man who has led a long and distinguished life. He will be missed!”

All eyes were on the front row on the left side of the cathedral facing the pulpit. That's where Trump and his wife, Melania, sat, along with the other former presidents and their families: Jimmy Carter, Barack Obama, Bill Clinton and his wife — Trump's 2016 Democratic rival, Hillary Clinton. When the Trumps entered the cathedral, they took a pair of seats next to the Obamas, exchanging handshakes. Trump and the Clintons did not acknowledge each other.

Also attending: Britain's Prince Charles, the king and queen of Jordan, Polish President Andrzej Duda and other dignitaries from around the world. 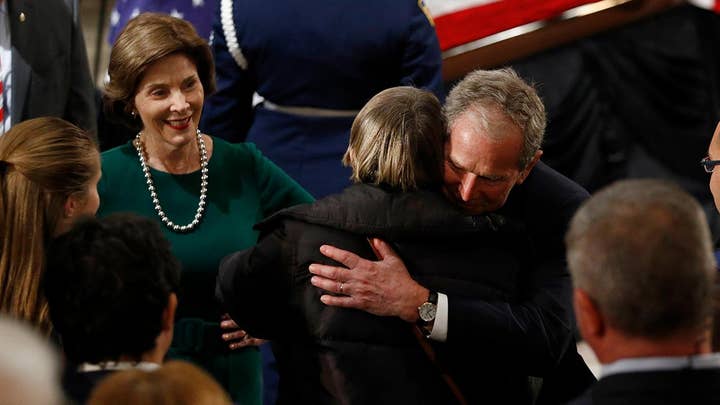 Bush was known for his gentlemanly demeanor, dedication to traditional American values, willingness to take on foreign despots like Iraq's Saddam Hussein and Panama's Manuel Noriega, and leadership presiding over the breakup of the Soviet Union.

Bush, who died Friday at the age 94, was preceded in death by about eight months by his wife, Barbara Bush.

Bush’s casket has been in the Capitol since Monday night, when a short service was held with family, friends and lawmakers. Since then, thousands of visitors have flocked to the Capitol Rotunda to pay their respects as Bush was lying in state. 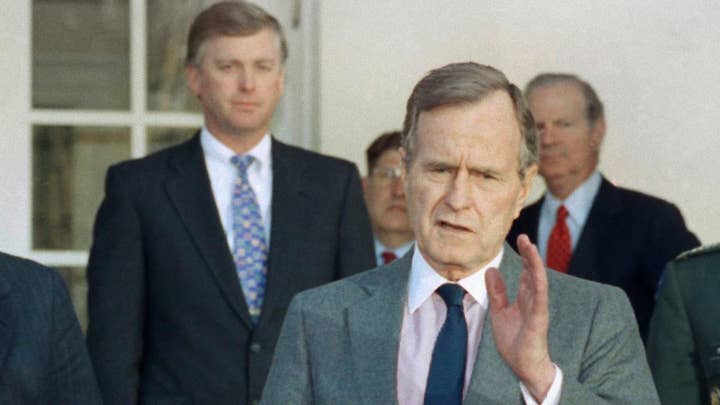 He'll be laid to rest on the grounds of the George H.W. Bush Presidential Library and Museum, near his wife, Barbara, and their daughter Robin, who died of leukemia in 1953 at age 3.