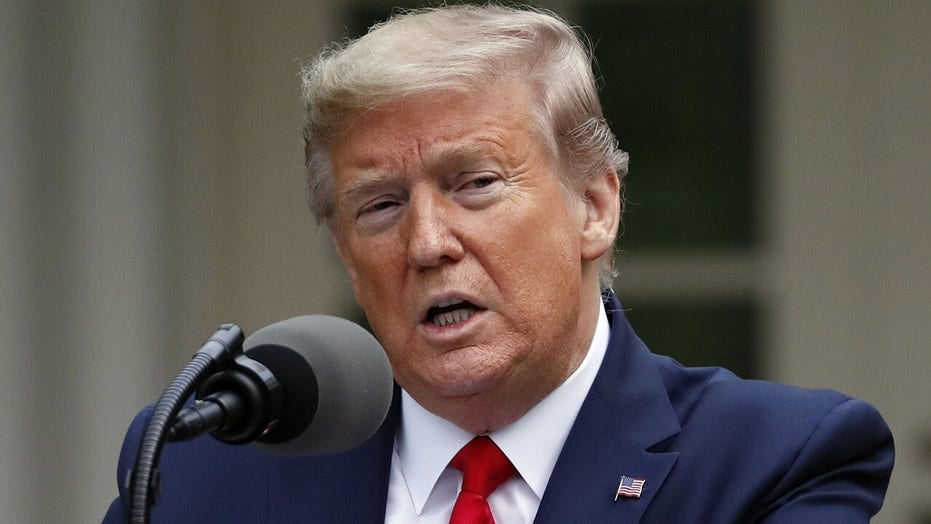 Matt VanDyke, Ford's director of U.S. marketing, talks to Fox News Autos about the automaker's new campaign highlighting the resilience of the American workforce and the outlook for sales in the coming year.

When President Trump arrives in Michigan Thursday, he'll get a chance to see one of the success stories of America's innovative all-hands-on-deck response to the coronavirus pandemic.

Trump will tour the Ford Motor Co. Rawsonville plant that reconfigured its operations during the pandemic and shifted from making automobiles to ventilators to help save lives.

And much like how Detroit was the Arsenal of Democracy during World War II, with Ford's Willow Run plant producing one B-24 Liberator airplane per hour, the workers on today's pandemic response assembly line feel a similar sense of pride for helping fellow Americans during hard times.

President Trump will visit Ford Motor Company’s Rawsonville plant in Michigan on May 21, 2020, which is making ventilators for the coronavirus pandemic. Photo courtesy of Terry Bowman.

"I could not be more proud of my fellow rank and file workers," said Terry Bowman, a Ford Motor Co. Rawsonville plant employee who is working on the ventilator project.

"They could have stayed home all safe and sound. But yet, all of these workers ... decided on their own, that they wanted to come in and work on a ventilator project in the middle of this pandemic."

Bowman, 54, normally makes transmission oil pumps for trucks at the Ypsilanti Township plant, then the pandemic came and stay-home orders hit. Ford closed the plant and Bowman went on unemployment in March.

When Congress passed the more than $2 trillion CARES Act in March, workers on unemployment got an additional $600 per week payment from the federal government on top of the normal state benefits. In Michigan, the maximum rate is $362 per week. So with the added federal boost, laid-off autoworkers could get $962 a week. That rate would amount to more than $50,000 a year.

So when Ford put out the call for workers to voluntarily come back to work to make ventilators and personal protective equipment, some of those who stepped up were making less money by putting their health on the line to work than by staying home and collecting unemployment checks, said Bowman.

President Trump will visit Ford Motor Company’s Rawsonville plant in Michigan on May 21, 2020, which is making ventilators for the coronavirus pandemic. Ford employee Terry Bowman is seen here working on a ventilator.

"A lot of the workers are actually working only 40 hours and making less than what they would have if they would have just stayed home and received the additional $600 unemployment," said Bowman, who ended up making more because of overtime.

"All these volunteer workers did not have to be there but decided to come in to be a part of something bigger than themselves," he added.

In all, more than 1,000 Ford employees signed up to work at four southeast Michigan auto plants that have been converted to make ventilators and personal protective equipment. Other plants are making masks, respirators and face shields.

Construction of the ventilator unit at the Ford Rawsonville plant in Michigan. Photo courtesy of Terry Bowman.

Ford converted an unused portion of the Rawsonville plant to build out the ventilator manufacturing unit. Ford intends to manufacture 50,000 of the GE/Airon Model A-E ventilators by mid-July.

The ventilator model is unique because it runs on compressed air, not electricity, so it doesn't need to be plugged it. It's ideal for a quick setup in an emergency, on the battlefield and during the transport of patients.

Ford said it dubbed the ventilator and PPE production “Project Apollo” after the Apollo 13 launch in 1970 when a lunar landing was aborted after an oxygen tank failed two days into the mission, forcing the astronauts to improvise a fix.

Bowman, who is co-chair of the Michigan Republican Party and active on the Trump campaign, said he wrote the White House to invite Trump to see firsthand the effort of Ford workers helping in the coronavirus crisis.

Terry Bowman at the Ford Rawsonville plant in Michigan.

Despite working 37 days straight, Bowman said the mood on the ventilator assembly is very positive as workers have the patriotic spirit of helping serve the country during the global pandemic. Michigan has been especially hard hit by the pandemic. Nationwide, more than 1.5 million people have been sickened by the contagious virus and more than 93,000 Americans have died.

"The ventilator project was brought about by the Defense Production Act, which hasn't really been used in 78 years, so I thought it was pretty historic," Bowman said on his decision to sign up for the project. "I wanted to be a part of something historic.

"My family has all been healthy, and I thought there's a moral issue to this: Shouldn't you go back and help people who might need ventilators?  I just thought it was the right thing to do."

Ford is taking additional precautions for workers on the special coronavirus projects and as the auto manufacturing begins to reopen. Before Bowman heads to work, he logs online at home and answers a questionnaire to certify that he doesn't have symptoms. When he arrives, he has a no-touch temperature scan. All employees wear a face mask at work. Safety glasses with side shields or face shields are also required for jobs that don't allow for social distancing.

"I feel safer at work than I do anywhere," Bowman said.

Ford Motor Co., team leader Kyle Lenart, right, inspects a ventilator that the automaker is assembling at the Ford Rawsonville plant, Wednesday, May 13, 2020 in Ypsilanti Township, Mich. The plant was converted into a ventilator factory, as hospitals battling the coronavirus report shortages of the life-saving devices. The company has promised to deliver 50,000 by July 4. Lenart is volunteering to make ventilators at the plant outside Detroit that, beginning Monday, will phase back into producing automotive components. (AP Photo/Carlos Osorio)

Trump's visit to Michigan marks his latest travel to a swing state in an effort to demonstrate his desire to get American back to work. Trump is expected to tout America as "the king of ventilators" and to praise the collaboration between Ford and General Electric.

The two U.S. companies "have stepped up to make ventilators and PPE in a time of need -- exemplifying the power of the American spirit and ingenuity at work," the White House said in a statement.  "Ford has a rich history stepping up in a time of crisis. During WWII, their Willow Run assembly plant was producing one B-24 per hour."