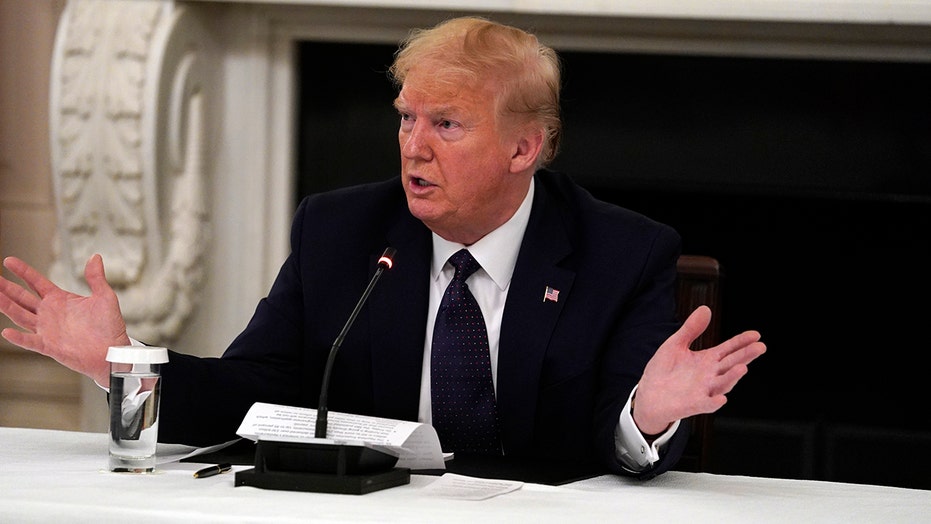 President Trump arrived in Michigan on Thursday to tour a Ford Motor Company plant that’s producing ventilators for hospitals in the battle against the coronavirus pandemic.

Ford repurposed its manufacturing plant in Ypsilanti and teamed up with General Electric to quickly manufacture ventilators as well as personal protective equipment (PPE) used by health care workers and first responders on the front lines in the fight against the outbreak.

The trip will be the latest stop on a tour the president kicked off earlier this month to thank businesses producing PPE and important medical equipment. He made similar stops at a medical equipment distributor in Pennsylvania last week and two weeks ago at a facility in Arizona that is manufacturing surgical masks.

"I want to thank you, because you're making America proud," Trump told the workers at the medical distribution company in Allenstown, Pa., last week.

But the visits also help Trump spotlight his administration’s efforts steering the federal response to the coronavirus pandemic, which could boost public confidence in the job he’s doing combating the crisis.  Further, the trips have allowed him to make stops – and grab plenty of local media attention – in some of the most crucial states in November’s presidential election.

While the White House emphasizes that the visits are official in nature and that there’s absolutely “no involvement or coordination” with Trump’s reelection team, they do have some of the trappings of the Trump campaign rallies that the president seeks to soon resume. And that’s led critics to accuse the president of “wasting taxpayer dollars” as he visits crucial states he needs to carry to win reelection — even as the general election battle between him and presumptive Democratic nominee Joe Biden is still largely being waged in a series of virtual events.

“These are official events fully executed from beginning to end by the White House with no involvement or coordination with the campaign,” deputy White House press secretary Judd Deere told Fox News.

And Trump campaign communications director Tim Murtaugh emphasized that “Americans can see that President Trump is fighting to protect their safety and reopen the economy. He is doing his job as president and critics would complain if he didn’t go. They are the ones playing politics."

At last week’s official event in Pennsylvania, the president walked to the stage as Lee Greenwood’s “God Bless The U.S.A.” blared, and departed to “You Can’t Always Get What You Want” by the Rolling Stones, two staples on the playlist at Trump campaign rallies.

During his speech, the president took aim at Biden and criticized the press covering the event, which further gave the feel of a campaign event. As the president drove from the airport to the event, hundreds of Trump supporters lined the streets of Allentown, waving flags and holding Trump 2020 signs.

A crowd of people look on as the motorcade carrying President Trump passes on the way to a tour of Owens &amp; Minor Inc., a medical supply company, Thursday, May 14, 2020, in Allentown, Pa. (AP Photo/Evan Vucci)

The campaign – while not coordinating with the White House – used top surrogates such Republican National Committee Chairwoman Ronna McDaniel to do local radio interviews ahead of the president’s trip.

The Democratic National Committee (DNC) argues that Trump is playing politics with the coronavirus.

"Throughout this pandemic, Trump has consistently put his political fortunes ahead of the lives and livelihoods of the American people. Wasting taxpayer dollars on swing state photo ops to boost his reelection as tens of thousands of small businesses still can't get loans and he refuses to allocate federal aid for states to pay police officers, firefighters, teachers and front line workers is a cynical low that voters will not forget,” DNC deputy war room director Daniel Wessel told Fox News.

The DNC and the state parties have been bracketing the president’s trips with press calls with local political, health, business and labor leaders.

While Trump’s visits grab the lion's share of attention, Vice President Pence has also become a frequent flyer again in recent weeks. Over the past month, Pence has made official White House trips Virginia, Minnesota, Wisconsin and Iowa, all swing states in the general election. On Wednesday, the vice president is in Florida, the largest of the key battleground states.

Trump is far from the first president running for reelection to be accused of using official White House trips for political purposes.

“There are many advantages that incumbent presidents enjoy during an election cycle. Among them is the taxpayer-funded travel. Historically, presidential travel perceived to be more for campaigning than state business has received criticism by the president's opponents,” veteran political scientist Wayne Lesperance noted.

To that point, former President Barack Obama dealt with the same perceptions during his travel.

“This criticism is certainly not unique to President Trump; nor is it unique to one party or the other. In fact, criticizing a sitting president is a bipartisan practice leveled at whichever part is in the White House by whichever party seeks to retake the Office of the Presidency,” added Lesperance, vice president of academic affairs at New England College.

But Trump has faced criticism that he’s gone beyond what past presidents have done in blurring the lines between official and political events.

Lesperance pointed out that Trump’s travels come as many governors are still enforcing stay-at-home restrictions in order to prevent the spread of the coronavirus.

“What's different with President Trump is his travel comes in a time of a global pandemic when governors and mayors across the country are trying to encourage stay home, stay safe orders along with other protective measures,” he said.