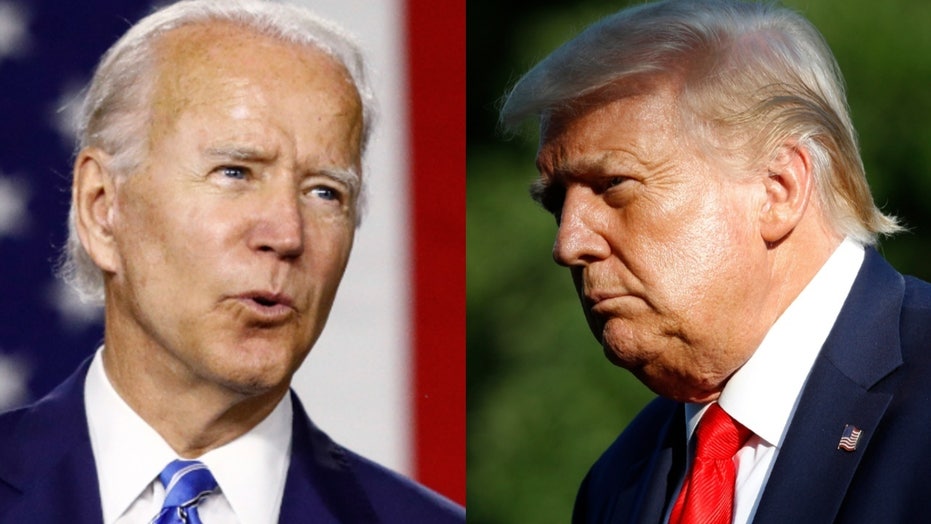 The virus is the top issue to voters, over half of them disapprove of how President Trump’s handling it, and they increasingly trust Joe Biden to do a better job on it.  That keeps Biden ahead in the presidential race, according to a Fox News survey of registered voters.

That advantage is outside the margin of error. However, neither candidate receives 50 percent support and 10 percent are undecided/back someone else -- and the race has narrowed since June, when the former vice president was up by 12 points (50-38 percent).

Seven percent of those approving of Trump’s job performance back Biden.

Biden is preferred over Trump among extremely motivated voters (+8 points), those extremely likely to vote (+9) and those who feel it is extremely important their candidate wins (+13).

However, the number of Biden supporters who are extremely likely to vote drops 25 points if the virus is hitting so hard in November as to, for instance, close restaurants. Because the drop-off would just be 16 points among Trump supporters, that puts Biden’s lead at just 3 points over the president in that still-raging coronavirus scenario.

The virus is a campaign issue -- but it could also be a factor, like bad weather, that reduces turnout.

Meanwhile, in contrast to 2016 when voters viewed both candidates as unlikable, Biden garners a net +11 favorable rating: 54 percent view him favorably vs. 43 percent unfavorably.

For Trump, it’s 43 percent favorable vs. 56 percent unfavorable. That gives him a net -13 points. Indeed, nearly half, 47 percent, have a “strongly” unfavorable opinion compared to 31 percent for Biden.

Voters believe Trump lacks the key traits for the Oval Office: less than half think he has the mental soundness (43 percent), intelligence (42 percent), and judgment (40 percent) to serve effectively as president. For reference, 36 percent felt he had the necessary judgment in October 2016, less than a month before his election victory.

Biden bests Trump on each measure: 47 percent are confident in his mental soundness, 51 percent believe he has the intelligence and 52 percent say he has the judgment.

Notably, 50 percent eludes both candidates on mental soundness. Those ages 65+ think Trump has it by a 1-point margin and that Biden lacks it by 3 points.

The biggest trait difference is on compassion: 56 percent believe Biden has it compared to 36 percent for Trump.

All that helps explain why more trust Biden to do a better job than Trump on race relations (+21) and coronavirus (+17 points).  Last month, more trusted Biden on the virus by 9 points.  The two are trusted about equally on the economy (Biden +1).  It was a 3-point Trump edge in May.

Twenty-nine percent rank coronavirus the No. 1 problem facing the country. That tops the 15 percent who cite the economy and 10 percent who say race relations.

Eighty-six percent are concerned about coronavirus spreading, and the number saying the virus is “not at all” under control jumped 18 points since last month, from 33 percent to 51 percent.

The president’s ratings are underwater by 13 points on the pandemic (43 percent approve, 56 percent disapprove) and by 21 points on race relations (35-56 percent).

His ratings on the economy split 47-47. That’s down from a high 56 percent approval in January and is only the fourth time he hasn’t received positive marks on the issue. Currently, just 26 percent say they are better off than four years ago and most, 69 percent, rate the economy negatively.

Voters favor a more aggressive response to the virus than the president.

Majorities favor a national stay-in-place order for everyone except essential workers (59 percent) and a national mask-wearing order for indoor spaces (71 percent).

Two-thirds want children to attend public schools this fall in person, to some extent. That includes 15 percent who think their public schools should fully reopen as usual, 21 percent who prefer opening with social distancing and masks, and 31 percent who want a mix of in-person and remote. Twenty-five percent would prefer schools be fully remote.

Parents and nonparents hold similar views, but moms and dads with kids at home see things differently. Dads are more likely than moms to favor some kind of reopening (80 vs. 54 percent). Moms are more inclined than dads to support being fully remote (37 vs. 15 percent).

By a 62-32 percent margin, voters favor continuing the extra $600/week unemployment benefit Congress passed in response to the pandemic. Most Democrats (78 percent) and a large minority of Republicans (46 percent) favor extending it.

More than twice as many voters think candidates should only hold virtual events right now (62 percent) as say it is okay to campaign in front of crowds (28 percent).

The number predicting Trump will be reelected has dropped 11 points since February. At that time, 56 percent thought he would win. Now, 45 percent think so. The decline in reelection expectations comes from both Democrats (-13 points) and Republicans (-9).

Overall, 61 percent are satisfied with their candidate choices, but 33 percent think the ballot should include a “none of the above” option. More Trump supporters (73 percent) than Biden supporters (62 percent) are happy with their choices.

Conducted July 12-15, 2020, under the joint direction of Beacon Research (D) and Shaw & Company (R), this Fox News Poll includes interviews with 1,104 randomly chosen registered voters nationwide who spoke with live interviewers on both landlines and cellphones. The poll has a margin of sampling error of plus or minus 3 percentage points for all registered voters.