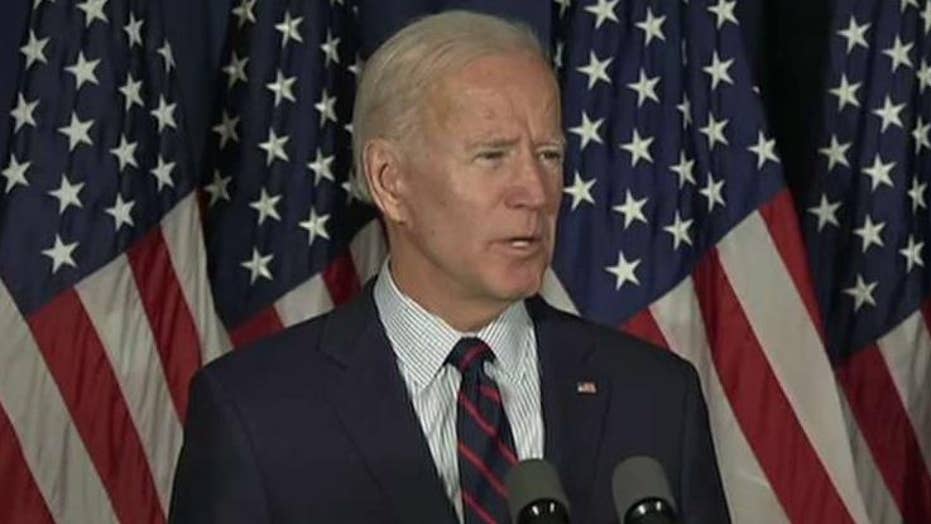 2020 hopeful Joe Biden says the president has violated his oath of office and betrayed the nation; Griff Jenkins reports from Washington.

Together Joe Biden and Elizabeth Warren capture the support of more than half of Democratic primary voters, according to the latest Fox News national poll on the 2020 election.

Biden stays on top in the race with 32 percent support among primary voters, up 3 points since September.  He’s followed by Elizabeth Warren at 22 percent -- that’s up 6 points and a new high for her. Bernie Sanders is at 17 percent, down 1 point since last month.

While Biden’s support has stayed between 29-35 percent since March, his current 10-point advantage is about half of his 19-point lead in June.

Biden retains top billing with strong support among non-whites, voters over age 45, and moderates/conservatives.  Warren has strengthened her position by increasing support among suburban voters, very liberals, and men.

When Democratic primary voters’ first and second choice preferences are considered together, Biden and Warren tie at 45 percent support, Sanders is at 34 percent, Harris 15 percent and Buttigieg 13 percent.

President Trump’s allegations about improper actions by Biden and his son have so far failed to chip away at Biden’s support in the primary race -- and Democratic primary voters continue to believe the former vice president is the candidate best equipped to beat Trump in 2020:  43 percent feel that way, up from 42 percent last month.  Nineteen percent think Warren has the best chance to oust Trump and 15 percent say Sanders.

At the same time, the poll finds the three top Democratic candidates with sizable leads over the president in potential head-to-head matchups.

“If Warren continues to poll as strongly against Trump as the former vice president, it makes it increasingly difficult for the Biden team to keep making the argument he is the most electable candidate,” says Democratic pollster Chris Anderson, who conducts the Fox News Poll with Republican Daron Shaw.

The impeachment inquiry hasn’t caused any real shifts in the ballot test, as Trump’s support in the two-way matchups has been between 37-42 percent all year.  However, the poll finds an 8-point shift since last month in the number expecting Trump will be re-elected.  In September, more thought he would win by a 6-point margin and now more expect he won’t by 2 points.

And while most Republican primary voters want to keep Trump as their party’s nominee, nearly one in five, 17 percent, would like to see someone else run.

“So far, Trump has been able to keep his Republican base on board,” says Shaw. “If the percentage opposing his re-nomination creeps into the 20s, that would be a troubling sign.”

Meanwhile, voters continue to believe Donald Trump is dishonest.  Sixty-three percent say that -- far more than the 35 percent who think he is honest and trustworthy.  By the way, that’s the same number who said Trump was honest before he won the 2016 election.

Vice President Mike Pence does a bit better than his boss, although not by much:  39 percent say he’s honest and 54 percent say dishonest.

On the other side, each of the top three Democratic candidates receives positive ratings on this measure.  Sanders performs best with 59 percent saying he is honest and trustworthy (36 percent disagree).  Fifty percent think Warren is honest vs. 44 percent dishonest, and for Biden voters split 48-47 percent.

Among Democrats, 87 percent think Sanders is honest and trustworthy, while 81 percent feel that way about Warren and 75 percent Biden.  Seventy-three percent of Republicans say Trump is honest.

Currently, 51 percent of voters have a favorable opinion of Sanders, while 43 percent view him negatively.  That puts him in positive territory by 8 points.  More view Warren positively by 7 points (46 favorable vs. 39 unfavorable) and Biden by 6 (50 favorable vs. 44 unfavorable).

The ratings are closer to even for Buttigieg (+3 points), Yang (+3), Booker (-2), Harris (-3) and O’Rourke (-4).  They each also have large numbers who have never heard of them or have no opinion of them.  For example, 43 percent of voters are unable to rate Yang, while 36 percent can’t rate Buttigieg and 32 percent can’t rate Booker.

Voters view Trump more negatively than positively by 13 points (43-56).  His personal favorable rating was underwater by 22 points in the days leading up to the 2016 election (38-60).

Sanders is off the campaign trail since suffering a heart attack October 3.  He’s 78 years old, while Biden is 76, Trump is 73, and Warren is 70.

Conducted October 6-8, 2019 under the joint direction of Beacon Research (D) and Shaw & Company (R), this Fox News Poll includes interviews with 1,003 randomly chosen registered voters nationwide who spoke with live interviewers on both landlines and cellphones.  The poll has a margin of sampling error of plus or minus three percentage points for all registered voters and 4.5 points for Democratic primary voters (484).