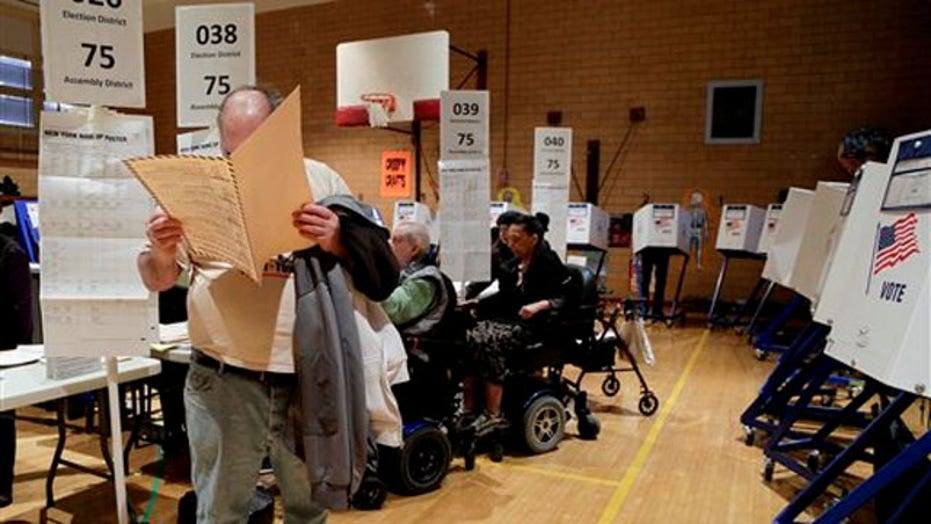 A look at the 2014 midterm election exit polls

Dissatisfaction with President Obama, along with concern about the future of the economy and a sense the country is on the wrong track, contributed to a wave of Republican pickups, including Republican control of the U.S. Senate and additional gains in the U.S. House of Representatives.

A 59 percent majority feels dissatisfied or angry toward President Obama, while 41 percent are enthusiastic or satisfied with his administration’s performance.  This is similar to his job rating: 44 percent approval vs. 54 percent disapproval.

Nationally, a third of all voters said opposition to the president was a reason for their in vote in House races, while only 20 percent expressed support for Obama in their choice of candidate.

Meanwhile, there is a sense among voters that the economy continues to struggle: 70 percent rate the country's current economic condition as not good or poor, while 28 percent say the economy is in good condition and only 1 percent calls it excellent.

Just over three-quarters of Americans -- 77 percent -- are at least somewhat worried about the direction of the nation’s economy in the next year, while 22 percent said they were not too worried or not at all worried.

Worried About Future of U.S. Economy?

Direction of the Country

This pessimism extends to attitudes toward life for the next generation of Americans. Nearly half think life for their children will be worse than life today, while only 22 percent say it will be better.

Life for Next Generation

Despite the attention to issues such as Ebola and ISIS, the economy remains most prominently on the minds of voters. Nearly half -- 45 percent -- see the economy as the most important issue facing the country. Those economy voters split 49-49 in their House vote.  Health care voters went for the Democrat by 60-38 percent, while immigration voters backed the Republican by 73-25 percent.

Nearly half of voters nationally feel ObamaCare went too far, nearly doubling the number who say it didn’t go far enough. About one in five (21 percent) say the law is about right. Voters who think the law went too far went for the Republican candidate in their district by nearly 70 points.

Only one voter in five says they can trust the government in Washington to do what is right just about always or most of the time.  Most voters trust Uncle Sam only some of the time or never.

The key voting group of independents made a big difference again Tuesday. While they made up the same amount of the electorate, they were more likely to back the Republican by 10 points. In 2010, independents went for the Republican in their district by 19 points.

Here are the key findings in some of the most contested states.

Colorado
In a Senate election where women’s issues were central to the campaign, Sen. Mark Udall emerged the leader among that group, but it was Rep. Cory Gardner, the Republican challenger, who won the day.

Gardner’s support came from many groups, including independents and male voters.

Over half of Colorado voters disapproved of President Obama’s job performance, mirroring  results in many other states. Gardner won the support of these voters by an 82-13 percent margin.

Finally, almost two thirds of Colorado voters said most illegal immigrants working in the United States should be offered a chance to apply for legal status.

Georgia
In Georgia, Republican David Perdue held the open Senate seat for the Republicans, defeating Democrat Michelle Nunn and garnered enough of the vote to avoid a runoff election.

Three-quarters of Georgia voters said who controlled the Senate factored into their vote. These voters supported Perdue by a 53 percent to 46 percent margin.

Iowa
Republican Joni Ernst took the open Senate seat in Iowa away from the Democrats, defeating  Democrat Bruce Braley. Ernst played up her farming background, which resonated with Iowa voters. More than four-in-ten voters were from rural areas, and they strongly backed her.

More voters agreed with Ernst on the issues, than Braley.

President Obama is not popular in Iowa, with 60 percent of voters disapproving of the job he is doing, while 39 percent approve.

Kansas
Republican incumbent Pat Roberts held onto to his seat in Kansas today as the party faithful put their support behind him.

Despite his win, 62 percent of voters said Roberts has spent too much time away from Kansas to represent the state effectively. Those voters broke for Orman 55-38 percent.

Louisiana
Louisiana will host a runoff between incumbent Democratic Sen. Mary Landrieu and her Republican challenger Bill Cassidy. Cassidy appears to have the advantage, with voters saying they would support Cassidy in a runoff by a 51 percent to 43 percent margin

Additionally, about half of North Carolina voters said Hagan agrees with Obama too often.

Nearly 40 percent of North Carolina voters were very worried about the direction of the nation’s economy. These voters supported Tillis, 72 percent to 25 percent.

Virginia
In a race that is still too close to call Wednesday morning, Sen. Mark Warner received an unexpectedly strong challenge from Republican candidate, Ed Gillespie. The race was driven in part by dissatisfaction with President Obama’s job performance.

Seniors, who strongly supported Warner in 2008, broke for Gillespie Tuesday, which contributed to the closeness of the race.

Four out of five Virginia voters are worried about the direction of the nation’s economy next year.  Only 40 percent of those voters went for Warner, while 58 percent went for Gillespie.

Methodology
Edison Research conducted this exit poll for Fox News and interviewed over 18,000 voters as they left randomly selected polling places around the country.