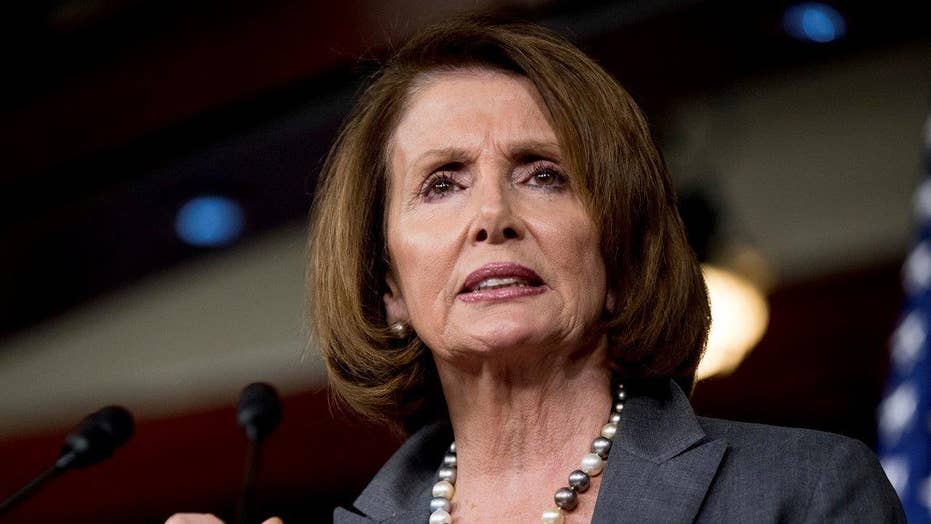 It is almost impossible to prophesize which lawmakers might matriculate into congressional leadership positions.

One lawmaker may appear to hold the inside track one day. And then the next, the dynamic evolves and the universe is different. That politician is suddenly on the outs.

The same with House Majority Leader Kevin McCarthy, R-Calif. The latter’s opportunity to succeed Boehner lasted all of a hot minute. And just two weeks ago, House Speaker Paul Ryan, R-Wis., was the person in the catbird seed.

Remember, Ryan was supposed to face trouble from the conservative House Freedom Caucus. Could Ryan cobble together enough votes on the floor because of the enmity between him and then-Republican presidential nominee Donald Trump?

And then if Mr. Trump won, Ryan was supposed to be out the door as President Trump surely wouldn’t stand for his nemesis occupying the speaker’s chair.

Now Ryan finds himself in better standing among House Republicans then before -- thanks to President-elect Trump. And three weeks ago, some Democrats most-loyal to House Minority Leader Nancy Pelosi, D-Calif., were touting her return regardless of the election results.

“If she did not work hard and did not listen to others and did not engage with her colleagues, then you would see challenges and rumblings like you’re seeing on the other side,” Rep. Eric Swalwell, a California Democrat and a Pelosi partisan, argued in October. “But we don’t have that because she works hard every day.”

Pelosi appeared a few days ago to be ensconced in her position for at least another Congress, regardless of whether Democrats picked up seats in the House. Then Democrats forced her to reschedule leadership elections planned for last week. Now the California Democrat faces a bona fide challenger in Ohio Democratic Rep. Tim Ryan.

Gallego co-spearheaded the effort to postpone the leadership elections to November 30.

“I don’t care. I’m agnostic,” Pelosi told fellow Democrats in a testy closed-door caucus as members advocated the later vote. “We’ve been through hell. And it’s only going to get worse as (Trump) makes his appointments and we have this fight.”

Anyone remember Rep. Tom Reynolds, R-N.Y.? Didn’t think so. But that’s the point. Just a decade ago, Reynolds was thought to be the next speaker of the House.

And then he wasn’t.

Look that one up sometime.

Pelosi further infuriated some Democrats when she handed out an agenda plan for next year at a recent caucus meeting. Skeptical Democrats told Fox the maneuver was tone-deaf as they wanted more deliberation.

“Without even asking anybody for a vote, I have over two-thirds of the caucus supporting me,” Pelosi said as Ryan plotted his bid. “It’s a funny thing. When somebody challenges you, your supporters turn out.”

In addition, Pelosi is a fundraising juggernaut. Tim Ryan or anyone else would struggle to match her. Time is a critical factor in the leadership election. The later date grants Ryan time to organize against the California Democrat. What does it mean to Pelosi?

“Not very much because we’ll be out for Thanksgiving,” she said with a shrug.

One could divide the House Democratic Caucus into three groups. First, weld together the Congressional Black Caucus and Congressional Hispanic Caucus. They’re generally aligned with Pelosi and offer her the largest chunk of her support.

Then, there’s the “Midwesterners.” Toss in some lawmakers from New York state and Pennsylvania as well, even though the geography moniker doesn’t match. They’re classic “Rust Belt” Democrats. This is the turf where Democrats lost the presidential election as disaffected, union members and former Democrats aligned with Trump. This sect is a “new” voice in the Democratic Caucus -- and where Tim Ryan could find strength. Finally, there’s a coalition of younger House Democrats. They split their allegiances. But there is tension between this youthful wing and the “old guard” that Pelosi appears to represent.

Part of Pelosi’s biggest problem is that she has been the leader or the Speaker for 14 years. It’s rare that experience works against someone. But it might in this instance. Democrats know that she led them to the majority in 2006. She reminded reporters that she knows “how to get it done.” But some Democrats wonder whether her time has passed.

Tim Ryan’s appeal is unique. First, he’s not named Pelosi, which to some Democrats might be the best thing he has going for him.

But what’s most appealing is the fact that his district in northeastern Ohio and the Mahoning Valley is quintessential Trump country.

Ryan contends he wasn’t looking to challenge Pelosi, though some close to her dispute that. They note Ryan’s flirted with two gubernatorial bids and one Senate run. Some speculate he could run for governor in 2018.

“This all started by people calling me, not me calling people,” Ryan said. “I think there was some attraction to somebody from Youngstown, Ohio, who was sent all around the country for Hillary Clinton to talk to union workers and try and connect with people that I know how to connect with.”

One can crystallize the appeal of Ryan through the mindset of Rep. Marcy Kaptur, D-Ohio. She is the most-senior woman in the House, first elected in 1982. Kaptur represents a very similar district compared to Ryan’s in northern Ohio. She’s suspicious of trade pacts and worked against passage of the North American Free Trade Agreement (NAFTA) and similar treaties.

Just after the election, Kaptur was firmly in Pelosi’s camp.

“I’ve signed a letter that the women (members) are signing on her behalf,” she said last week. “But obviously if someone from our region were to get into the race, I would have to reconsider.”

Examine the math of what it takes to become the next House Minority Leader:

Democrats are expected to hold 194 seats in the new Congress. One uncalled House race remains: Rep. Darrell Issa, R-Calif., against Democratic challenger Doug Applegate. The number could change. But Issa leads. Democrats will hold four of the non-floor voting delegates to Congress from the District of Columbia, Guam, the Northern Marianas Islands and the U.S. Virgin Islands. These figures are members of Congress for all intents and purposes. They can’t vote on the House floor. But Democrats permit them to vote in their own internal caucus. So, the total number of ballots cast in the leadership election is likely to be 198. That means an even 100 votes are what’s necessary to win.

That’s a high bar for Ryan or anyone else in a race with Pelosi. The California Democrat rings up big numbers among the CBC and CHC groups that gets her within striking distance of 100 right there. And even though Ryan’s appealing to “Rust Belt” Democrats, it’s doubtful he’ll claim many of them. The same thing with the Young Turks because many owe their very presence in the House to the Pelosi machine.

It’s hard for Ryan to reach the magic number of 100.

Some Democrats speculated to Fox News that Ryan might run, then bow out before the vote, having successfully made his point. Just the fact that Ryan took on Pelosi is great politics in his part of Ohio -- even if he gets his clock cleaned. That helps Ryan in his district, to say nothing if he pursues another office down the road.

There are some Democrats who think his chances to truly challenge Pelosi already expired. Granted, a protracted period might help Ryan gin up support. But one senior Democratic source thinks time could work against Ryan.

“A quick surgical strike Thursday may have been the best way to go,” said the source of the anticipated election last week. “No one would have seen it coming.”

If Ryan loses, Democrats must consider how to address those who support him. A model for that exists under the incipient leadership of Senate Minority-elect Chuck Schumer, D-N.Y.

Schumer tapped Sen. Bernie Sanders, I-Vermont, for his leadership squad, then simultaneously went to the other end of the spectrum to usher Sen. Joe Manchin, D-W.V., into the fold.

“The social rhetoric (of Trump) didn’t bother them because they were so mad at everything else,” Manchin said.

Manchin notably squabbled with outgoing Senate Minority Leader Harry Reid and refused to support the Nevada Democrat in the 2014 leadership election. But Manchin sees an opportunity with Schumer at the helm.

“You think I’d be standing up here if I didn’t think it would be different?” Manchin asked. “You didn’t see me standing with Harry, did you?”

Questions about who might succeed Pelosi have floated around the Capitol for years. There’s a reason why few have heard much lately from House Minority Whip Steny Hoyer, D-Md.

There’s a rivalry between Pelosi and Hoyer that goes back to the 1960s when they interned in the same Senate office together. Pelosi -- a Maryland native -- successfully blocked Hoyer at every opportunity to climb the leadership ladder.

For now, Hoyer keeps quiet, letting the controversy swirl around Pelosi. Hoyer won’t run against Pelosi in a straight up race. She’d beat him. But if Pelosi were out of the mix, Hoyer might be hard to defeat.

If Pelosi wins, well, some Democrats will grouse that it’s business as usual.

That’s a scenario which enraptures Republicans.

“I kind of like Pelosi around,” quipped Kevin McCarthy. “As long as Pelosi is leader, I think we keep the majority.”

And if Tim Ryan were to succeed, it may be outright bizarre to have him as minority leader and Paul Ryan as House speaker.

“It would be good for the Irish,” suggested the Ohio Democrat.