A former top FBI lawyer acknowledged he was personally involved in the warrant application to surveil then-Trump campaign aide Carter Page and confirmed other "unusual" steps taken in the FBI’s Russia probe in 2016, during a closed-door congressional interview.

“I was aware of the [Russia] investigation,” James Baker told House investigators in October. Fox News has confirmed details of the transcript which is still under government review before its public release.

Baker said he was briefed on the Foreign Intelligence Surveillance Act (FISA) warrant “as time went by” and recalled how he got involved early in the process. The warrant relied heavily on the unverified anti-Trump dossier, which was financed by the Democratic National Committee and the Hillary Clinton campaign via the law firm Perkins Coie.

Fox News confirmed the Baker transcript also includes the following exchange with investigators regarding his involvement in the surveillance application:

Question: "So that is why you took the abnormal or unusual step in this particular situation because it was sensitive?"

Question: "So you actually got involved because you want to make sure that, what?"

Baker: "I wanted to make sure that we were filing something that would adhere to the law and stand up over time." 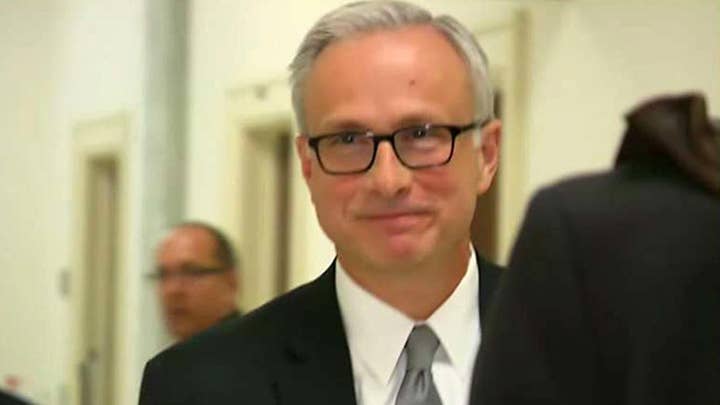 Baker also told lawmakers, as part of the joint investigations by the House Judiciary and Oversight Committees, that it was not routine for him to get involved personally in such matters.

"I did not ... at that point in time when I was at the FBI ... almost all of the FISA applications did not go through me," he said.

Fox News first reported last fall that Baker said his contact with a top lawyer working with the Democratic National Committee and Clinton campaign in late 2016 -- as federal investigators prepared the surveillance warrant -- also was unusual.

Baker said Perkins Coie lawyer Michael Sussmann initiated contact with him and provided documents, describing the contact with the private lawyer as unusual and the “only time it happened.”

LIZ PEEK: 2 YEARS OF TRUMP HATRED, AND WHAT HAS DEMS' 'RESISTANCE' ACCOMPLISHED?

Perkins Coie was a key player in the funding of the controversial anti-Trump dossier, which Republicans have long suspected helped fuel the FBI’s investigation. The DNC and Clinton campaign had hired opposition research firm Fusion GPS in April 2016, through Perkins Coie, to dig into Trump’s background. Fusion, in turn, paid British ex-spy Christopher Steele to compile the dossier, memos from which were shared with the FBI in the summer of 2016.

Asked about Baker’s statements in October, however, a Perkins Coie spokesperson said Sussmann’s contact was not connected to the firm’s representation of the DNC or Clinton campaign.

The spokesperson said in a statement: “Prior to joining Perkins Coie, Michael Sussmann served as a cybercrime prosecutor in the Criminal Division of the Department of Justice during both Republican and Democratic administrations. As a result, Sussmann is regularly retained by clients with complex cybersecurity matters.

“When Sussmann met with Mr. Baker on behalf of a client, the meeting was not connected to the firm’s representation of the Hillary Clinton Campaign, the DNC or any Political Law Group client.”

Since then, Senate Homeland Security and Governmental Affairs Committee Chairman Ron Johnson, R-Wis., formally requested further information from the FBI about the contact. Further, conservative watchdog Judicial Watch launched a Freedom of Information Act lawsuit in December against "the Department of Justice seeking records of all meetings in 2016 between former FBI General Counsel James Baker and the Perkins Coie law firm."

Fox News reached out to representatives for Baker and Perkins Coie to provide additional comment or context. The Epoch Times earlier reported some details from the Baker transcript.