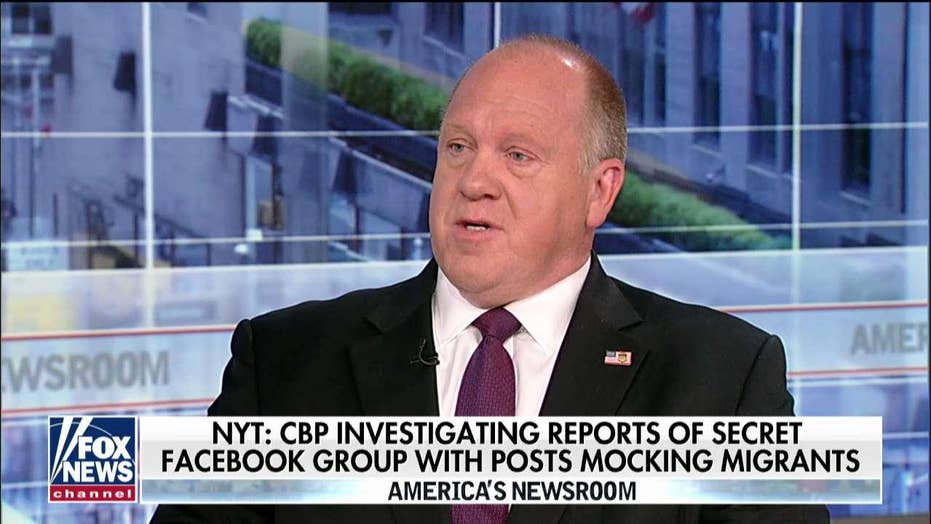 A report from ProPublica Monday accused Border Patrol agents of posting graphic and vulgar jokes about Democratic lawmaker Alexandria Ocasio-Cortez, as well as making light of the deaths of migrants in a private Facebook group.

The purported Facebook posts were slammed by the head of Border Patrol as "completely inappropriate."

"These posts are completely inappropriate and contrary to the honor and integrity I see — and expect — from our agents day in and day out," Border Patrol Chief Carla Provost said. "Any employees found to have violated our standards of conduct will be held accountable.

Homan said it's unclear from the messages whether the posters were actually affiliated with the Border Patrol, but if they were they will be "held responsible."

"Any Border Patrol agents that have participated in something unbecoming of their position will be dealt with," he told Bill Hemmer on "America's Newsroom."

"It's gonna be fully investigated. ... It's a sad situation. It's a distraction from all the good work the men and women of the Border Patrol are doing every day trying to take care of these migrants."

OFFICIALS PUSH BACK ON AOC'S CLAIMS ABOUT BORDER FACILITIES

He also disputed the claim by Ocasio-Cortez, D-N.Y., that people in detention centers are being forced to drink out of toilets. Homan said many facilities have an apparatus where the sink and toilet are attached, but the water lines are separated.

"No Border Patrol agent is gonna make anyone drink out of a toilet. It's ridiculous on its face," he said.

Ocasio-Cortez, though, maintained that while she did see the combination toilet-sink facilities, the station had only one of them, and the sink portion wasn't working.

“So the women were told they could drink out of the bowl,” she tweeted Tuesday.