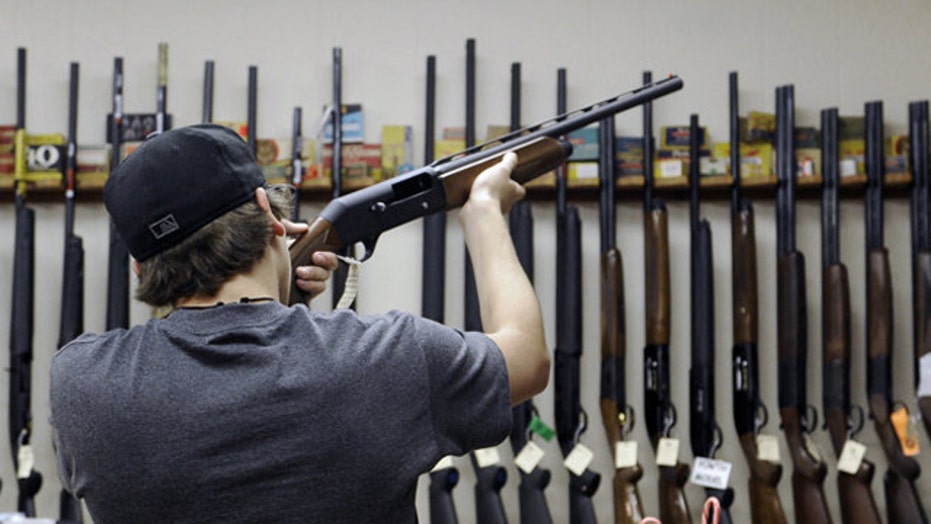 N.Y. county refuses to release names and addresses to newspaper

National and state firearms groups are fighting back against a pair of sweeping and controversial gun control bills being pushed through the Illinois state legislature during the final days of a lame-duck session.

On Wednesday night, a state Senate committee advanced two measures to restrict semiautomatic weapons and high-capacity magazines. It's unclear at this point whether the full Senate will take them up before the new General Assembly class is sworn in Jan. 9, when the process would have to restart.

The bills would face an uphill climb in the Senate, particularly as gun groups were mounting a flash campaign against them. FoxNews.com was told late Thursday that Democrats were still trying to line up the votes, after the measures passed on party lines out of committee the night before.

The first proposal would ban the possession, delivery, sale and transfer of semiautomatic handguns and rifles. Gun groups say this kind of restriction would be so expansive as to affect most gun owners in the state.

"It's easy for politicians like Governor Pat Quinn to stand up and pound the lecturn while calling for the ban and confiscation of semi-automatic firearms," the Illinois Rifle Association said in a statement. "But (Illinois Gov. Pat) Quinn and his ilk would do well to remember that there are 1.5 million firearm owners in Illinois. Of that 1.5 million, most own one or more firearms that would be banned under the knee-jerk proposals being floated post-Newton."

The group also warned that the bills would "result in all the gun ranges in the state going out of business."

National Rifle Association lobbyist Todd Vandermyde told lawmakers the bill would restrict about 75 percent of handguns and 50 percent of long guns in circulation today. He also said it would treat law-abiding gun owners like criminals, and is in conflict with Second Amendment rights upheld by the courts.

"I've never seen a piece of legislation that tramples on so many court decisions," Vandermyde said.

Those pushing for enhanced restrictions say stricter rules are needed in the wake of a string of high-profile mass shootings -- most recently the deadly school shooting in Newtown, Conn. Quinn had been trying earlier this year to pass new legislation in the wake of the Colorado movie theater shooting, but failed.

Kotowski sponsored legislation in 2007 that would have prohibited assault weapons and .50-caliber rifles. His bill made it through a Senate committee but died on the floor.

The two pieces of legislation are being supported by a majority of state Democratic lawmakers as well as Quinn and Chicago Mayor Rahm Emanuel.

Emanuel, the mayor of one of the most gun-controlled cities in the country, praised the committee passage and says even stronger regulations are required to protect communities. He added that there is a need "for common-sense laws that provide the residents of our cities with the safety they deserve."

But to some -- like the 150 pro-gun advocates who have already registered their opposition with the state -- Emanuel's calls for change go too far. Gun rights groups have likened the proposals an assault-weapons ban "on steroids."

In August, Quinn fell out of favor with lawmakers after he rewrote a bill that covered ammunition purchases but substituted language on semiautomatic guns.

The governor's approach did not sit well with Republicans or Democrats who thought he had overstepped his authority. The General Assembly voted to override his amendatory veto.

On Dec. 11, three days before the Sandy Hook shooting, a federal appeals court struck down a state law that bars most people from carrying a loaded gun except in their home or place of business. Illinois remains the only state with an outright ban on carrying a loaded weapon in public. The decision was heralded as a big win for gun groups.

Adding pressure to the situation are gun manufacturers in Illinois. Some, like ArmaLite owner Mark Westrom, told FoxNews.com that he's been fielding offers from other states to move his operations there.