The destroyer USS Stethem arrives for an official visit to Shanghai, China on Nov. 16, 2015. (Reuters)

The USS Stethem, a guided-missile destroyer based in Japan, sailed within 12 nautical miles of Triton Island, which is part of the Paracel Islands located in the South China Sea between China and Vietnam.

The destroyer was trailed by a Chinese warship during its Sunday voyage.

Twelve nautical miles is the territorial boundary that extends beyond the shores of all nations, sailing inside that distance sends a signal the United States does not recognize the claim.

The move comes as the Trump administration appears to be losing patience with Beijing over its continued military build-up in the South China Sea. The U.S. has been frustrated with Beijing’s failure to reign in North Korea's nuclear and missile programs. 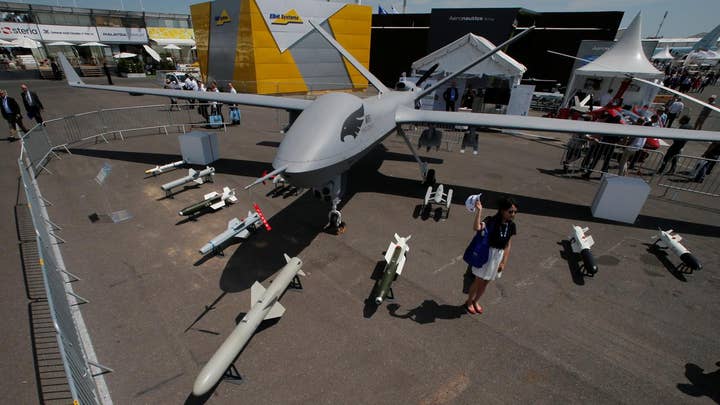 Triton Island is not part of China's artificial islands in the region which were constructed in the past few years atop former reefs, but is located among the landmasses in the Paracel chain. The U.S. Navy last sailed a warship off the coast of Triton Island in October. The Obama administration conducted similar operations.

The Pentagon wants to conduct what it calls "freedom of navigation" operations, or FONOPS, to challenge China's claims with enough frequency in the hopes they become more routine and not as newsworthy, according to an official with knowledge of the discussions.

Lt. Cmdr. Matt Knight, a spokesman for the U.S. Pacific Fleet, would not confirm the operation but said in a statement to Fox News, "We conduct routine and regular FONOPs, as we have done in the past and will continue to do in the future."

In late May, another guided-missile destroyer, USS Dewey, sailed approximately six miles from one of China's man-made islands in the South China Sea, a first for the Pentagon since Trump assumed office.  The American warship conducted a "man-overboard" drill off the coast of Mischief Reef sending a signal to Beijing that the United States does not honor its claim to the reef--one of seven former reefs China has turned into artificial islands.  Three contain runways and other military fortifications.

"Fake islands should not be believed by real people," said the head of the U.S. Pacific Command, Admiral Harry Harris, in a speech Wednesday in Brisbane, where the United States is participating in the largest ever joint military exercise with Australia, aimed in part to send a message to Beijing.

"China is using its military and economic power to erode the rules-based international order," Harris added.

Friday, new satellite imagery published by the Asia Maritime Transparency Initiative (AMTI) part of the Center for Strategic and International Studies, a Washington think-tank showed new military facilities including radar systems being installed on Mischief, Fiery Cross and Subi Reefs in the Spratly Islands located south of the Parcel Islands in the South China Sea.

USS Stethem (DDG 63) destroyer vessel arrives at a military port for an official visit, in Shanghai, China, November 16, 2015. REUTERS/Stringer CHINA OUT. NO COMMERCIAL OR EDITORIAL SALES IN CHINA - RTS7BHM (REUTERS)

While U.S. officials had seen the build-up for months, they are more concerned about the potential for China to place advanced surface-to-air missiles on the artificial islands, which could challenge U.S. military flights in the region.   Fox News first reported in December that China moved SA-21 missile batteries with a 250-mile range to the island province of Hainan for training, which could be sent to the artificial islands at a later date.  For the time being, they remain inside China.

The last time the U.S. Navy challenged China's claims in the South China Sea, the Trump administration pushed back on accusations it was turning a blind eye to China's military build-up on its artificial islands, while looking for Beijing to help with negotiations to halt North Korea's nuclear weapons and missile programs.

"While I greatly appreciate the efforts of President Xi & China to help with North Korea, it has not worked out.  At least I know China tried!" Trump said in a tweet last month.

On Friday, the Trump administration unveiled new sanctions against a Chinese bank linked to North Korea's nuclear weapons and missile programs, a day after announcing a new $1.4 billion arms sale to Taiwan.

Announcing the sanctions, Treasury Secretary Steve Munchin said the move was not in retribution for Beijing failing to rein in North Korea.  "This is not directed at China, this is directed at a bank, as well as individuals and entities in China," he said.

China is sending messages of its own.

As Beijing marked the 20th anniversary of Hong Kong's handover from British rule this weekend, President Xi Jinping presided over the largest military parade ever held in the territory.  Standing in the back of a jeep, Xi was driven past more than 3,000 assembled troops in formation in a show of strength.

On Wednesday, China launched the first of its newest class of destroyer called the Type 055, which many analysts say resembles the size and capability of the U.S. Navy's Arleigh-Burke class of guided-missile destroyers, like the one which conducted the operation near the contested Chinese island this weekend.

According to the Center for a New American Security (CNAS), China has 183 cruisers, destroyers, coastal ships and submarines compared with 188 for the U.S. Navy.  CNAS projected in a March report that China will surpass the United States Navy in these types of warships by the end of the next decade, one of the reasons the U.S. Navy has requested a buildup to a 350-ship fleet, a view shared by many in Congress.

China claims most of the South China Sea where more than $5 trillion of commerce passes through each year.

Last week, the U.S. State Department called out China for being one of the worst human trafficking offenders--dropping Beijing to its lowest designation joining Iran, North Korea and Russia.   The report said China had done little to stop what has amounted to modern slavery and sex trafficking affecting millions.