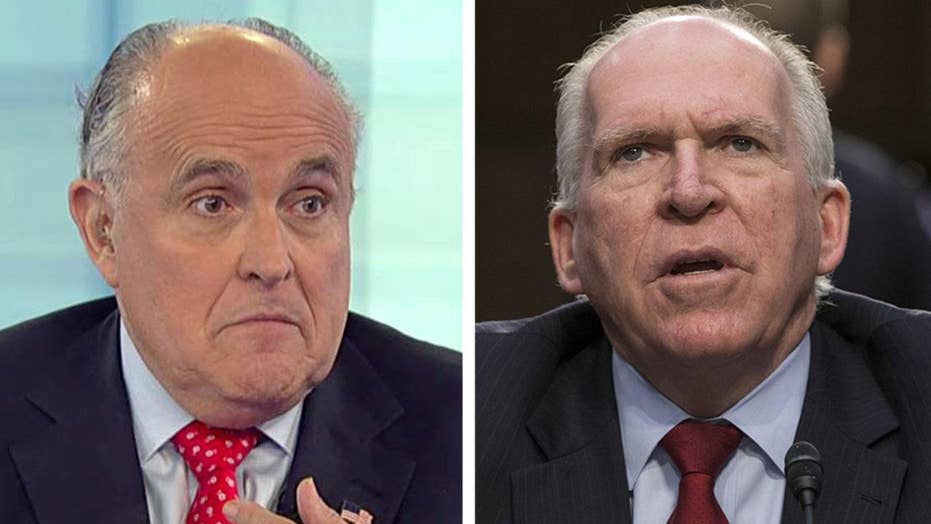 Rudy Giuliani: John Brennan should be before a grand jury

Rudy Giuliani, a personal attorney for President Trump, on Monday slammed former CIA Director John Brennan and said he should face a grand jury for his role in peddling the salacious Trump dossier that kicked off the “phony” Russia investigation.

“Unless he’s the biggest idiot intelligence agent that ever existed—although he never really did much intelligence work—it’s false. You could look at it [the dossier] and laugh at it,” Giuliani said.

The precise origins of the Russia probe remain unclear. Officials have previously pointed to comments Trump adviser George Papadopoulos allegedly made about Russian dirt on Hillary Clinton as touching off the investigation in July 2016.

Brennan told NBC’s “Meet the Press” in February that the dossier played no role in the intelligence community’s assessment that was presented to both President Obama and Trump. Brennan said there were items in the dossier that raised his suspicions on whether it was accurate.

“I do think it was up to the FBI to see whether or not they could verify any of it,” he said.

Brennan served as the director under President Obama and has been a vocal Trump critic. He recently theorized that Russians may have dirt on Trump during an appearance on MSNBC’s “Morning Joe.” He later clarified that he does not have any information to back the theory.

The New York Times reported on a tweet Brennan sent out after Trump’s firing of Andrew McCabe, the former deputy of the FBI.

“When the full extent of your venality, moral turpitude, and political corruption becomes known, you will take your rightful place as a disgraced demagogue in the dustbin of history,” Brennan wrote.

Kimberly Strassel, a columnist for The Wall Street Journal, called Brennan a “ringmaster” in shaping the Russian interference narrative.

“The CIA director couldn’t himself go public with his Clinton spin—he lacked the support of the intelligence community and had to be careful not to be seen interfering in U.S. politics. So what to do? He called Harry Reid,” she wrote.