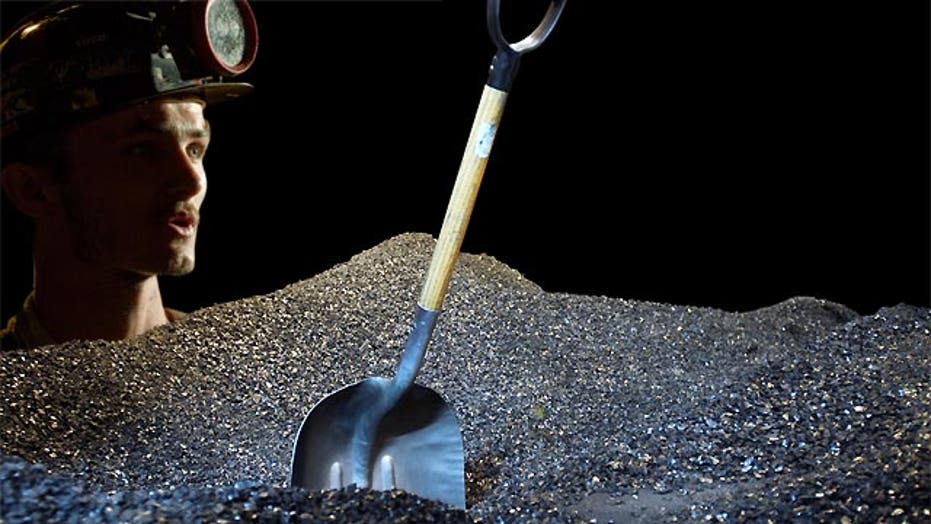 EPA set to strike decisive blow in war on coal?

Stymied by the GOP's long resistance to cap and trade legislation, the EPA this week began public hearings -- the next step toward a final rule -- to cut carbon dioxide emissions  from new coal plants.

The rule would limit emissions to 1100 pounds per Megawatt hour,  a  level the coal industry says is technologically unattainable.

"Opponents say this will prevent ever building another coal-fired plant in the United States today. They say that the technology is not commercially available. These claims are scare tactics," Rep. HenryWaxman, D-Calif., said in a press conference Thursday outside EPA headquarters in advance of the hearing.

Some supporters of the proposed rule say fracking has unleashed a treasure trove of cleaner natural gas. Its new abundance and low price has put coal at a competitive disadvantage, a welcome  development, they say, given the consequences of global warming.

"I think there's been a fair amount of scare mongering that says, the only way we can address climate change is through drastic action that’s going to increase everybody's electricity bills and ruin the kinds of vehicles they want to drive and none of that is happening, " says Elgie Holstein of the Environmental Defense Fund.

But the coldest winter in recent memory is reminding Americans of the need for fossil fuels. A bitter cold January in the Midwest sent propane to a record high of $4.24 a gallon. Heating oil also hit a record high of $4.18 a gallon.  Amid record cold in the South, where most homes use electricity for heat, the Texas power grid took emergency measures to avoid a blackout.

In Europe - years ahead of the U.S.  in green energy usage - many governments  are re-investing in fossil fuels as customers protest rising electricity rates.

"The global warming scientists from the UK and U.N. scientists like Michael Oppenheimer had said snow was a thing of the past," says Marc Morano of Climate Depot, a website devoted to countering claims of man-made global warming.

"As we see record snow and now are entering upon the snowiest decade in the East Coast,even snowier now than the 1960s was… I think it serves skeptics very well to point out that the predictions that the global warming activists have made are going, have gone, belly up," Morano  says.

Whether the cold winter is evidence of global warming or evidence against it, the new EPA regulation should be finalized just months before the 2014 mid-term elections and another approaching winter.

Republicans may seize the opportunity to show that limiting carbon dioxide is not without costs.