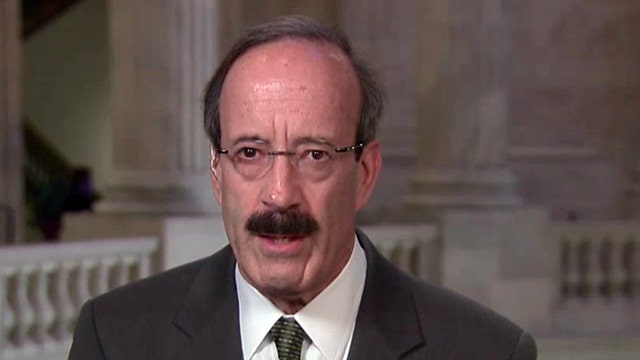 Congressman says it's 'worth it' to postpone vote on Syria

As he fights for his political life, New York Rep. Eliot Engel is getting help from some of the top Democrats in the House of Representatives.

The Democratic chairman of the House Foreign Affairs Committee has landed the backing of Majority Whip James Clyburn of South Carolina – the third-ranking Democrat in the chamber – as well as House Intelligence Committee Chairman Adam Schiff of  California and fellow New York Rep. Hakeem Jeffries, who chairs the House Democratic Caucus.

ENGEL CRITICIZES AOC AFTER SHE ENDORSES HIS PRIMARY CHALLENGER

The support comes as Engel’s feeling the heat from primary challenger Jamaal Bowman, a middle school principal who recently landed the endorsements of two of the biggest progressives in Congress, Sen. Bernie Sanders of Vermont and Rep. Alexandria Ocasio-Cortez of New York.

The slew of endorsements for Engel – who's served in Congress for more than three decades and currently represents New York’s 16th Congressional District, which encompasses parts of the New York City borough of the Bronx and portions of neighboring southern Westchester County – comes just over a week ahead of New York’s June 23 primary.

“We need leaders in Congress with proven records of standing up for civil & human rights. @RepEliotEngel is not new to the fight for justice & equality - he’s been in the fight for his entire life & I’ve worked w/ him on these issues for almost 3 decades,” Clyburn tweeted on Monday.

Clyburn's move comes as House Democrats – in the wake of the death of George Floyd in police custody – prepare to move through the chamber a sweeping police reform bill of which Engel is an original sponsor.

Schiff – spotlighting the House Democrats’ oversight of President Trump and his administration – said in a statement to Politico that ever “since Trump took office, Eliot has helped expose the abuses of his administration, and hold this lawless president accountable.”

And Jeffries took to Twitter to point out Engel’s years of supporting people harmed or killed by police violence, saying “Amadou Diallo. Ramarley Graham. Eric Garner. First Step Act. Children in Cages. Impeachment. Police Reform. @RepEliotEngel has always been there. Eliot is not a new friend. He’s a true friend.”

The backing by Clyburn and Jeffries – two senior Congressional Black Caucus members – comes after the CBC’s political wing was criticized for backing Engel, who’s white, over Bowman, who is black.

Engel – who also has the support of House Speaker Nancy Pelosi – has come under attack for spending more time at his home in Potomac, Md., than at his apartment in the Bronx. And recently he was put on the defensive after he was captured on a live microphone suggesting that “if I didn’t have a primary, I wouldn’t care” about speaking at an event.

The New York Times cited that moment as it endorsed Bowman.

The possibility of Bowman ousting Engel this month is earning comparisons to Ocasio-Cortez’s upset of longtime Rep. Joe Crowley in the 2018 Democratic primary.