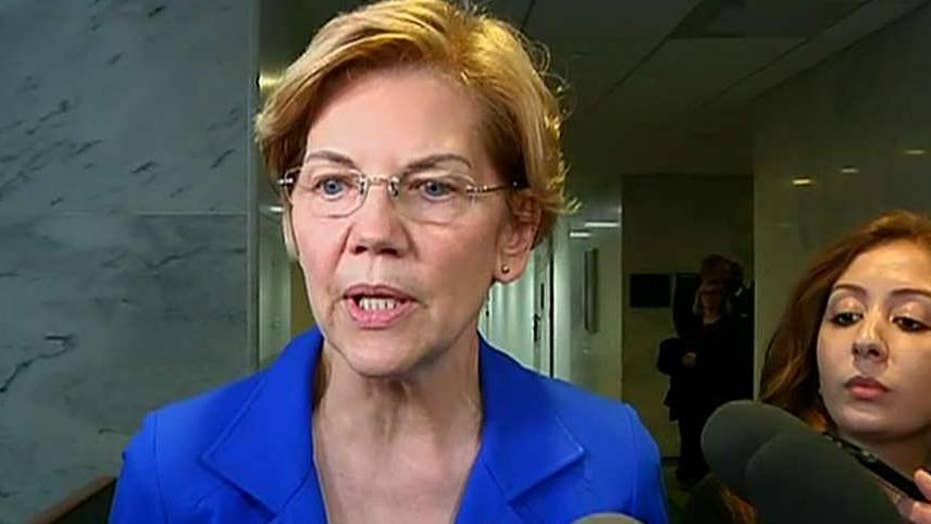 Sen. Elizabeth Warren responds to latest controversy over her heritage

Sen. Elizabeth Warren is aggressively pushing a new wealth tax – which she’s dubbed the “UltraMillionaireTax” – ahead of this weekend’s formal presidential campaign launch, but keeps running into the same question from critics: Is it even constitutional?

If the Massachusetts Democrat’s proposal were to become law, it would almost certainly face a court challenge – thanks to the fact that it’s a tax on wealth, as opposed to a tax on income.

Billionaire former New York Mayor Michael Bloomberg, a likely opponent to Warren in the crowded Democratic 2020 presidential field, has said of her proposal, “the Constitution lets you impose income taxes only, so I think it’s unconstitutional.”

She fired back that billionaires like him and possible independent candidate Howard Schultz “want to keep a rigged system in place that benefits only them and their buddies. … Not on my watch.”

Warren has offered two letters from 17 law professors defending the constitutionality of the proposed tax.

The issue comes down to the type of tax in question. The levy could be considered a “direct tax” imposed on people or the ownership of property, as opposed to an “indirect tax” on the use of property, such as buying, selling or transferring.

If that’s the case, then Warren would run into the tricky issue of “apportionment” — taxing residents differently based on the state where they live.

Article 1, Section 9 of the U.S. Constitution states, “No Capitation, or other direct, Tax shall be laid, unless in proportion to the Census or Enumeration herein before directed to be taken.”

So, the government can tax services or property transfers, but can only tax net worth if the tax is applied to each state in proportion to its Census population, argue critics of the Warren plan. Making a tax proportional to population is called “apportionment.”

Warren and legal experts backing her plan say it wouldn't require apportionment, but the matter would face a constitutional fight similar to the ObamaCare battle, said Ilya Shapiro, director of constitutional studies at the Cato Institute, a libertarian think tank.

“Simply a tax on wealth would be a direct tax that would have to be apportioned among the states, so it would probably have to be done as changing tax rates, depending on how much wealth you have, or some other kind of legal gimmick,” Shapiro told Fox News. “Then the question is raised: How does the IRS determine your wealth? Are you supposed to self-report? How does it count?”

“No one seems to be looking at the practicality of the proposal. It’s like whack-a-mole. It’s easy to avoid taxes,” said Eileen J. O’Connor, former assistant attorney general for the tax division of the Justice Department. “A valuation of what something is worth can be based on how much someone is willing to pay for it. Governments, estates and lawyers are always arguing over the value.”

The first of the two letters advocating Warren’s plan points to the 1895 ruling in Knowlton v. Moore, regarding taxing inheritances, and concludes, “It follows that your wealth tax proposal is plainly constitutional.”

“Knowlton confronted an inheritance tax that directly hit the property itself,” said the letter signed by professors from Yale, Columbia and American University among others. “Like your proposal, this wealth tax was progressive, increasing the rate from .75% to 3% as inherited property increased in value from $10,000 to $1 million. Nevertheless, the Court unanimously held that the tax was ‘indirect.’”

The second letter contends, “We believe such a law would be a constitutional exercise of Congress’ Article I power. … Constitutional text and history demonstrate that ‘direct’ tax is best interpreted as a narrow category that would not include a net worth tax.”

Watkins said the Knowlton ruling on inheritance dealt with transfer of a property, irrelevant to the Warren proposal on net worth. The only Supreme Court precedent that would back up Warren’s tax plan, he said, is the 1796 ruling in Hylton v. United States, that held taxes on carriages were not a direct tax, and only taxes on people or land were.

However, the Hylton precedent was overturned by the 1895 case of Pollock v. Farmers’ Loan & Trust Company, in which the high court held “taxes on personal property, or on the income of personal property, are likewise direct taxes.”

This ruling prompted the eventual passage of the 16th Amendment—which excluded taxes on income from requiring apportionment. However, this did not change the Pollock ruling on personal property, Watkins noted.