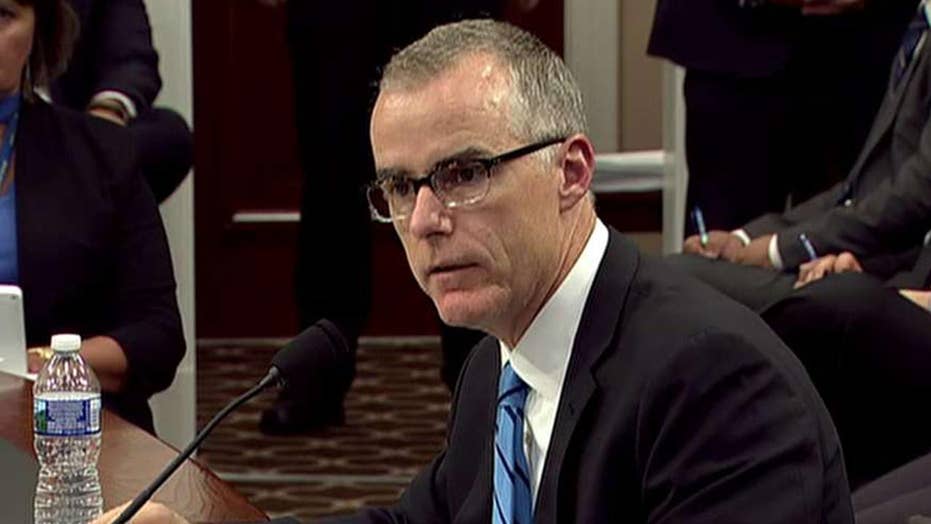 The Justice Department’s internal watchdog has sent a criminal referral for fired FBI official Andrew McCabe to the U.S. attorney’s office in Washington.

The move follows a recent DOJ inspector general report that found McCabe leaked a self-serving story to the press and later lied about it to then-Director James Comey and federal investigators, prompting Attorney General Jeff Sessions to fire him on March 16.

A source confirmed to Fox News that the referral was sent.

The Washington Post reported earlier that the IG referred the finding that McCabe misled investigators "some time ago," asking the top federal prosecutor for D.C. to examine whether he should be charged.

Representatives with the Justice Department, inspector general’s office and U.S. attorney’s office all declined to comment.

"The criminal referral from the IG is the right decision. It's about time we have some accountability for this type of conduct at the Justice Department," he said.

In an interview with CNN Thursday, Comey said that he had no knowledge of the referral, but confirmed that he could be a witness against McCabe if he is prosecuted.

"Given that the IG’s report reflects interactions that Andy McCabe had with me and other FBI senior executives, I could well be a witness," said Comey.

The former FBI Director added that he liked McCabe "very much as a person, but sometimes even good people do things they shouldn’t do ... I think it is accountability mechanisms working and they should work because it’s not acceptable in the FBI or the Justice Department for people to lack candor. It’s something we take really seriously."

In a statement, McCabe's legal team said they were advised of the referral "within the past few weeks."

"Although we believe the referral is unjustified, the standard for an IG referral is very low. We have already met with staff members from the U.S. Attorney’s Office. We are confident that, unless there is inappropriate pressure from high levels of the Administration, the US Attorney’s Office will conclude that it should decline to prosecute," they said.

While Comey may not have intentionally launched the investigation gunning for McCabe, it was spurred by a desire to find who leaked to The Wall Street Journal in October 2016 about an FBI probe of the Clinton Foundation. The story said a senior Justice Department official expressed displeasure to McCabe that FBI agents were still looking into the Clinton Foundation, and McCabe had defended agents' authority to pursue the issue.

That leak confirmed the existence of the probe into the Clinton Foundation, which Comey, who led the bureau at the time, refused to do.

Inspector General Michael Horowitz’s report said McCabe authorized the leak and then misled investigators about it, leaking in a way that did not fall under the “public interest” exception.

Horowitz found that McCabe lacked “candor” when questioned by FBI agents on multiple occasions, and that he told agents he did not authorize the disclosure and did not know who was responsible.

But McCabe’s legal counsel, Michael Bromwich, has blasted the inspector general report and has criticized Comey. The report said Comey and McCabe gave conflicting accounts about a conversation they had on the leak.

He issued a similar statement Wednesday in response to Comey's interview comments:

"In his comments this week about the McCabe matter, former FBI Director James Comey has relied on the accuracy and the soundness of the Office of the Inspector General's (OIG) conclusions in their report on Mr. McCabe. In fact, the report fails to adequately address the evidence (including sworn testimony) and documents that prove that Mr. McCabe advised Director Comey repeatedly that he was working with the Wall Street Journal on the stories in question prior to publication. Neither Mr. Comey nor the OIG is infallible, and in this case neither of them has it right."

On Thursday night, Comey told MSNBC that McCabe didn't tell him about plans to speak to the press.

On Wednesday, nearly a dozen Republican members of Congress sent their own criminal referral to the Justice Department and FBI seeking an investigation of McCabe, along with Comey, ex-Attorney General Loretta Lynch, Hillary Clinton and others.

The IG referral, however, could represent a more serious problem for McCabe.