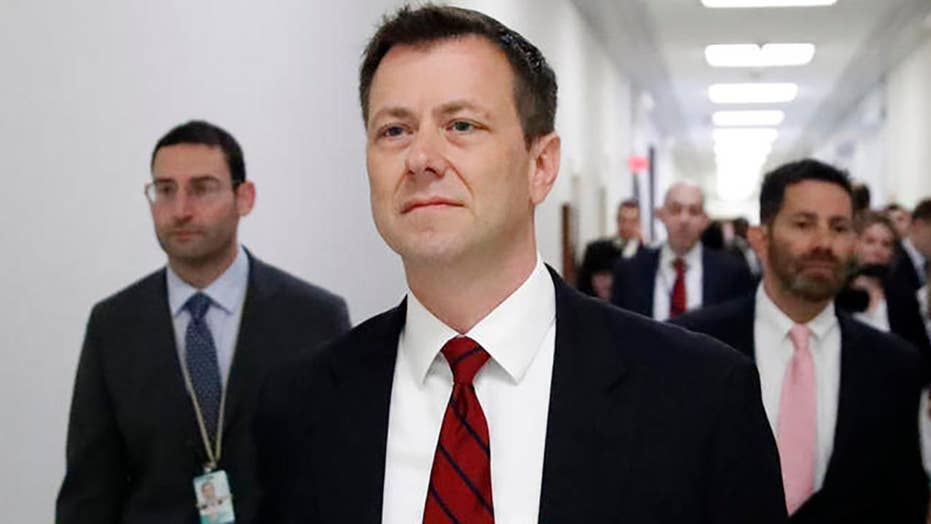 Former FBI Special Agent Peter Strzok defended his affair with now-former FBI counsel Lisa Page during a closed-door appearance before the House Judiciary Committee last summer, repeatedly denying the relationship presented a security risk when challenged by GOP aides, according to a newly released transcript of his testimony.

Strzok, who was fired from the bureau after months of scrutiny regarding anti-Trump text messages between him and Page, confirmed he was involved in an extramarital affair when asked about it during his interview before the committee on June 27, 2018.

GOHMERT UNLOADS ON ‘SMIRKING’ STRZOK: ‘HOW MANY TIMES DID YOU LOOK SO INNOCENT INTO YOUR WIFE’S EYES AND LIE TO HER’

But Strzok was also asked by Art Baker, the GOP investigative counsel for the committee, whether that affair could have made him "vulnerable to potential recruitment" by "hostile intelligence service[s]."

“Yeah, I don’t think I would characterize it that way,” Strzok said. “I think it is not so much any particular action as it is the way that action might be used to coerce or otherwise get somebody to do something. I can tell you that in no way would that extramarital affair have any power in coercing me to do anything other than obeying the law and doing honest, competent investigation."

Baker continued to press Strzok as to whether the affair could have been a “vulnerability” should he have been approached by a foreign intelligence service.

“I would absolutely respond not, you know – and, well getting into you know terms of art here, one argument is you would tell the service, ‘Let me get back to you.’ I would immediately go report that to my superiors and see how they wanted to follow up,” Strzok explained. “But it is—I absolutely would not have been vulnerable or even let alone consider any sort of recruitment attempt.”

“Pete welcomes the release of the transcript of his closed-door testimony, which we have been calling for since he voluntarily testified last June. It is further evidence that, contrary to the impression that the President’s allies in Congress tried to create with their selective and often inaccurate leaks, Pete at all times discharged his duties honorably, patriotically, and without regard to his personal political opinions.”

Later during the closed-door hearing, GOP senior counsel Ryan Breitenbach raised the affair topic again, asking Strzok whether the Justice Department or the FBI knew about his and Page’s “indiscretions.”

“I don’t know what they did or didn’t. I would tell you—and I think why it’s relevant that—why I’m saying this isn’t necessarily relevant is that my understanding of Bureau regulation is that, whatever morally you may think of an extramarital affair, it is not prohibited by Bureau regulation or policy,” Strzok explained, further defending his relationship with Page.

“Certainly if somebody is in your chain of command, if there’s any sort of impropriety or favoritism, or things like that, it is. But simply an extramarital relationship is not,” he said.

Strzok was again asked whether he thinks his affair would have made him “susceptible to potential exploitation” by a foreign intelligence service. Strzok again said, “I do not.”

Strzok and Page both worked on Special Counsel Robert Mueller’s team—with Page serving a short detail and returning to the FBI over the summer of 2017, and Strzok, later, being removed from his post and reassigned to the FBI’s human resources division following the revelations of their anti-Trump text messages, uncovered by the Justice Department inspector general.

Strzok was asked whether the FBI or Mueller’s office knew of their relationship when they were transferred from the team.

“I don’t know the answer to how widely that was or was not known within the FBI,” Strzok said. “And I just don’t – having answered that a couple of times now, truly, I can’t tell you—I mean, outside of the setting and everything going on, this has been—and the use and publicity of all this, extraordinarily painful and harmful and hurtful to my family. And I just don’t want to continue engaging in that process.”

During Strzok’s public congressional testimony last July before the judiciary and oversight committees, the affair itself was not a major focus of the committee’s questioning -- until Rep. Louie Gohmert, R-Texas, blasted Strzok in deeply personal terms.

“The disgrace is what this man has done to our justice system,” Gohmert said during the hearing on July 12, 2017. “I can’t help but wonder, when I see you looking there with a little smirk, how many times did you look so innocent into your wife’s eyes and lie to her about Lisa Page?”

Strzok and Page communicated on their work phones to hide their affair from their spouses, according to the inspector general report released in June 2017.

The two were also assigned to the bureau's investigation into Hillary Clinton's use of a private email server and handling of classified information, a case that was nicknamed "Midyear Exam" or "MYE" inside the bureau. Page resigned from her post as FBI counsel in May 2018. Strzok was fired from his post in August 2018.