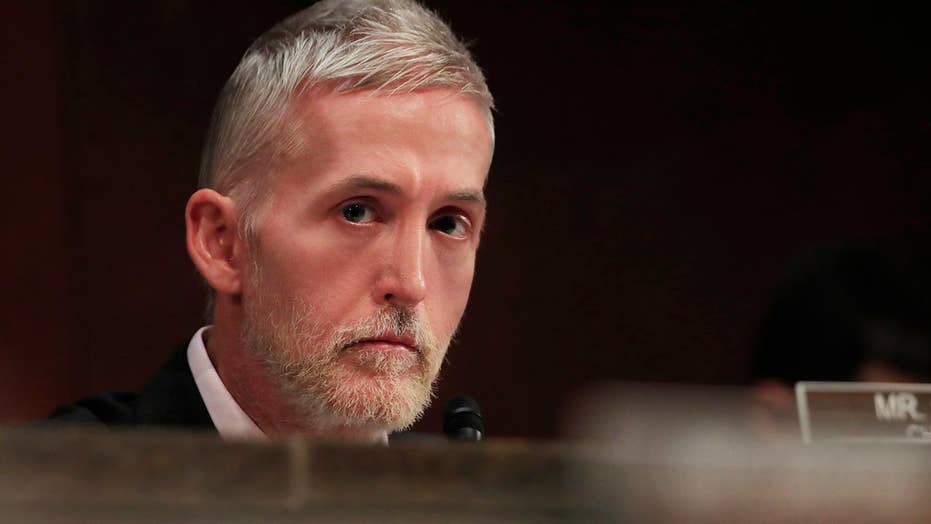 The Justice Department this week gave House Republicans some of the documents they seek related to the Russia election-meddling investigation and Hillary Clinton email probe -- after lawmakers threatened to hold officials in contempt for stonewalling.

House Oversight Committee Chairman Trey Gowdy, R-S.C., said on "Fox News Sunday" that House Speaker Paul Ryan, R-Wis., had warned that “there’s going to be action on the floor of the House this week if FBI and DOJ do not comply with our subpoena request.”

GOP WILL HIT FBI, DOJ WITH 'FULL ARSENAL OF CONSTITUTIONAL WEAPONS' IF THEY DON'T COMPLY WITH SUBPOENA, GOWDY WARNS

The House Judiciary Committee and House Intelligence Committee had requested more than a million documents from the FBI and DOJ related to the Clinton investigation and surveillance of members of the Trump campaign during the 2016 presidential campaign. While some documents had been produced, the committees have been pushing the DOJ for months to fully comply with the subpoenas.

But a spokesperson for Ryan told The Associated Press on Saturday that the department had partially complied with the subpoenas and had turned over more than a thousand new documents.

"Our efforts have resulted in the committees finally getting access to information that was sought months ago, but some important requests remain to be completed," the spokesperson, AshLee Strong, said in a statement Saturday.

"Additional time has been requested for the outstanding items, and based on our understanding of the process we believe that request is reasonable. We expect the department to meet its full obligations to the two committees."

However, House Freedom Caucus Chair Mark Meadows, R-S.C., pushed back, saying that the documents handed over relating to the subpoena by the Judiciary Committee are just a fragment of what was subpoenaed. He told Fox News that the additional 1,400 documents produced this week related to just one section of the subpoena: FBI and DOJ officials' requests to review surveillance records of the Trump campaign or Trump administration.

"This represents less than three percent of the potential universe of documents for that section," Meadows, who sits on the House Oversight Committee, said. He said another section is only 67 percent complete, while no documents have been produced for another section related to surveillance of the Clinton Foundation

"Based on the current production rate, it would take them 1 1/2 years to comply," he added.

House Intelligence Committee Chairman Devin Nunes, R-Calif., who has been a central figure in requesting the documents, was provided a classified letter about whether the FBI used “confidential human sources” before it started its investigation in Russia ties to the Trump campaign.

Republicans have targeted the circumstances as to how the Foreign Intelligence Surveillance Act (FISA) warrant was obtained to monitor Trump aide Carter Page and the possible use of an informant who spoke to members of Trump’s campaign.

AP reported that the DOJ is also working to provide documents related to former British spy Christopher Steele, who was behind the lurid and unverified anti-Trump dossier, which Republicans say was used to obtain the FISA warrant.

Acting Assistant Deputy Director Jill Tyson said that the FBI staff would be working through the weekend to keep production of documents moving forward, according to Politico. She also said that Nunes had asked for conversation transcripts between sources and Trump campaign officials -- that request was forwarded to National Intelligence Director Dan Coats.

The partial fulfillment of the request comes amid an escalating standoff between House Republicans and department officials.

This month, emails reviewed by Fox News showed that Deputy Attorney General Rod Rosenstein threatened to “subpoena” emails, phone records and other documents from lawmakers and staff on a Republican-led House committee during a tense meeting in January, in what aides described as a "personal attack."

Gowdy told "Fox News Sunday" last week that "the full panoply of constitutional weapons available to the people’s house" are on the table, including contempt of Congress.

"I don’t want the drama; I want the documents," Gowdy added.