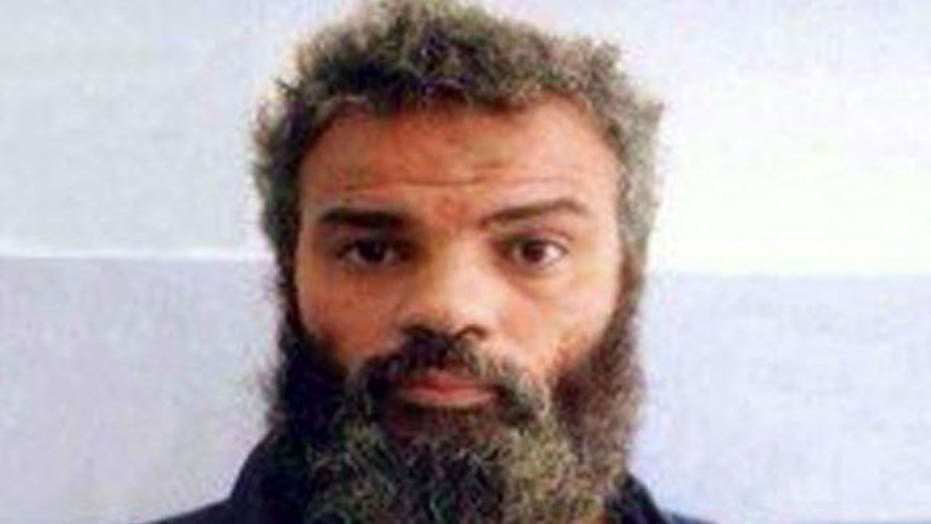 Benghazi suspect due in court

Court documents filed by the U.S. Justice Department in the criminal case against Benghazi attack suspect Ahmed Abu Khatallah provide unprecedented details about the evolution of the assault and further shatter the Obama administration's initial claim that it sprouted from protests over an anti-Islam film.

The narrative that the video played a role continues to live on, with former Secretary of State Hillary Clinton saying recently that some of the attackers may indeed have been influenced by the online video.

But the Justice Department's court filings make clear that at least those spearheading the attack were part of a "conspiracy," one that involved several members of the Ansar al-Sharia "Islamic extremist militia."

A government motion filed Tuesday seeking Khatallah's detention provides some of the greatest detail to date on the suspect's alleged role.

The motion says that in the days preceding the attack, the defendant "voiced concern and opposition to the presence of an American facility in Benghazi." According to the motion, a group of 20 or more "armed men," including militia members, assembled outside the U.S. compound at 9:45 p.m. the night of Sept. 11, 2012, and "aggressively breached" the gate.

After breaching the gate, they stole a U.S. vehicle, "forcibly entered" buildings and stole U.S. property.

"During this initial attack, buildings within the Mission were set on fire," the court document says, noting that the fires "ultimately led to the deaths" of U.S. Ambassador Chris Stevens and Information Management Officer Sean Smith.

U.S. personnel who were able to escape fled to the nearby annex, according to the document, and shortly afterward Khatallah entered the compound "and supervised the exploitation of material from the scene." After they were through, he and other Ansar al-Sharia members allegedly returned to a local camp and prepared for the next assault on the annex -- where two other Americans, Glen Doherty and Tyrone Woods, would later die.

The government motion went on to describe how Khatallah spent the days following the attack obtaining weapons and other equipment to defend himself "from feared American retaliation" and capture. According to the document, "he increased his personal security."

The documents are part of the case the U.S. government is building against him as the defendant is prosecuted in federal civilian court. More details and evidence can be expected in the weeks ahead.

In the meantime, the defendant is being held at a detention center outside Washington, D.C. At a hearing on Wednesday, a Khatallah defense attorney complained that the defense team had limited access to the Justice Department's evidence.

The details in even the few U.S. court documents that have been filed are a far cry from the Obama administration's initial narrative.

A host of administration officials pointed to an anti-Islam video in the days after the attack as the likely impetus.

"This was the result of opportunism, taking advantage of and exploiting what was happening as a result of reaction to the video that was found to be offensive," then-White House Press Secretary Jay Carney said on Sept. 20, 2012.

Administration officials have said repeatedly that the video explanation was based on the best-available intelligence at the time, though many Republican lawmakers question those claims.

But nearly two years removed from the attack, the motivation of the attackers is still an open debate.

Clinton, in her new book "Hard Choices," argued that it is "inaccurate" to say no one was influenced by the video, just as it is inaccurate to say all were influenced by it.

She echoed the comments in an interview with Fox News last month.

"I was trying to make sense of it. I think that the investigations that have been carried out basically conclude we can't say that everybody was influenced [by the video], and we can't say everybody wasn't," she said.

Even a bipartisan Senate Intelligence Committee report released in January said: "Some intelligence suggests the attacks were likely put together in short order, following that day's violent protests in Cairo against an inflammatory video."

But the information that has been released by the Justice Department indicates that at least the major players in the attack were operating on their own agenda.

The motion filed this week said Khatallah "was motivated by his extremist ideology."

The indictment itself claims the defendant "did knowingly and intentionally conspire and agree with other conspirators ... to provide material support and resources to terrorists," knowing they'd be used "in preparation for and in carrying out" the attack.