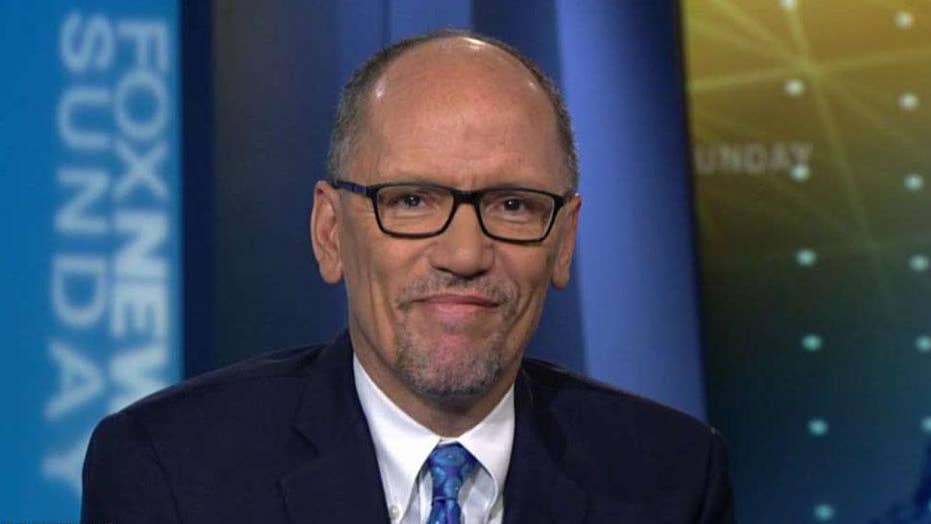 Democratic National Committee Chairman Tom Perez charged on "Fox News Sunday" that Republican concerns about the recent election of self-avowed Socialists in Congress -- as well as prominent Democrats' support for the sweeping Green New Deal and "Medicare-for-all" -- are little more than a calculated  Republican "trick" to distract from issues that "real people" care about.

President Trump has repeatedly derided socialism in recent weeks amid the ongoing collapse of Venezuela's economy and government, and has vowed that America will "never" become a Socialist country. But Perez suggested that Trump has more in common with Socialist dictators than he would like to admit.

"This is one of the oldest tricks in the playbook, Chris," Perez told anchor Chris Wallace. "You go back 75 years, when Republicans don’t want to discuss issues that matter to real people, they call it socialism. Social Security, when it was being debated -- you had Republicans calling it socialism. The minimum wage, in 1938, you had Republicans calling it socialism. Medicare, Ronald Reagan said, and I quote, 'Medicare will lead to socialized medicine. Medicare will lead to socialism in America.' The Affordable Care Act. ... all of those things were 'socialism.' Why do they do that? Because they don't want to talk about pre-existing conditions."

Although Reagan's prediction may ultimately prove accurate, Perez suggested, it still might have been a bridge too far for Democratic presidential candidates Kamala Harris and Elizabeth Warren to openly support taxpayer-funded reparations for slavery -- which are politically unpopular, and were opposed by former President Barack Obama.

"Civil rights is the unfinished business of America," Perez said, while refusing to commit to endorsing reparations. "That’s something that will be discussed during the course of the presidential nominating process."

He then turned to continue his thoughts on socialism: "The whole interesting thing about the continued use of the word 'socialism' is that repressive Socialist regimes, two of their most frequent qualities are -- No. 1, they go after the press, they try to undermine the press," Perez told Wallace.

Socialist Democrat Alexandria Ocasio Cortez, D-N.Y., announced the sweeping Green New Deal -- a proposal to effectively "transform" the U.S. economy within 10 years to eliminate farting cows and save the planet from what some Democrats say is its impending doom. A United Nations report late last year said that urgent action is needed to avert some consequences of climate change, but did not specify the costs or risks of such action. (AP photo.)

"And No. 2, they are -- they have endemic corruption," Perez continued. "And I find it very ironic when you hear this president using 'Socialist' all the time, I mean he, [Vladimir] Putin, Kim [Jong Un], Castro -- what they all have in common is they were doing so many of the same things.  You shouldn’t be attacking the press the way this president does. It’s unprecedented."

FEINSTEIN SCOLDS KIDS WHO DEMAND SHE ACCEPTS GREEN NEW DEAL, SAY THEY VOTED FOR HER -- BUT LEGALLY COULD NOT HAVE

Pressed by Wallace as to whether he was comparing Trump to murderous dictators, Perez said he was not -- but that Republicans risk a repeat of the 2018 midterm elections, which saw Democrats reclaim a majority in the House of Representatives, if they continue to support Trump's rhetoric.

"I’m just saying authoritarian Socialist regimes undermine the media -- that is wrong," Perez responded. "You shouldn’t do that, period -- should not go after the press, period, no footnotes, no exceptions. Authoritarian Socialist regimes have endemic corruption you should understand, we — Democrats won in 2018 in no small measure because of the culture of corruption engulfing this administration."

Perez separately denied that Democrats have their own media problem, following the allegedly false hate crime report by actor Jussie Smollett. Prominent Democrats, including 2020 presidential hopefuls Cory Booker and Kamala Harris, had voiced uncritical support for Smollett in the days after he said he was attacked by Trump supporters -- only to awkwardly reverse course once Chicago police accused Smollett of paying two Nigerian brothers to stage the attack to help his career.

"If the allegations that have come out in recent days are true, it’s unconscionable because hate crimes – the fact of the matter – are on the rise," Perez said. "And when you – when you create a false situation, you are doing an injustice to all the people that have been victimized."

FBI statistics show an increase in reported hate crimes in recent years, but the agency also noted that signicantly more law enforcement partners have begun providing hate crime data to the FBI in recent years -- meaning it is unclear whether the frequency of actual hate crime episodes is indeed increasing.

Perez insisted that "we acted on the facts as we knew at the time," and repeated that "hate crimes are on the rise," without providing evidence.

Wallace also queried Perez on a separate problem brewing in Virginia, where a top Republican announced Friday that the state's judiciary committee will invite the two women accusing  Democratic Lt. Gov. Justin Fairfax of sexual assault to testify when the legislature returns in April.

"I have a concern in the context of having a part-time state legislature conducting the hearings," Perez said. "I have been unequivocal in making sure that when allegations of this nature are made they are investigated. I don’t think the Virginia House of Delegates and the Senate are the right place to investigate it. We should have an independent investigation that should be prompt, it should be thorough, it should be fair. And that’s what should happen."

Perez repeated his call for the state's Democratic governor, Ralph Northam, to step aside, saying "his ability to govern has been undermined." A medical school yearbook photo on Northam's page showed one person in blackface and another in KKK garb, prompting Northam to apologize -- although Northam backtracked on his initial acknowledgment that he appeared personally in the photo.

As to whether Fox News will be invited to host one of the 12 upcoming Democratic primary debates, Perez demurred -- but suggested it remained a possibility.

"You know what would also be unprecedented?" Wallace asked. "Giving us a debate."