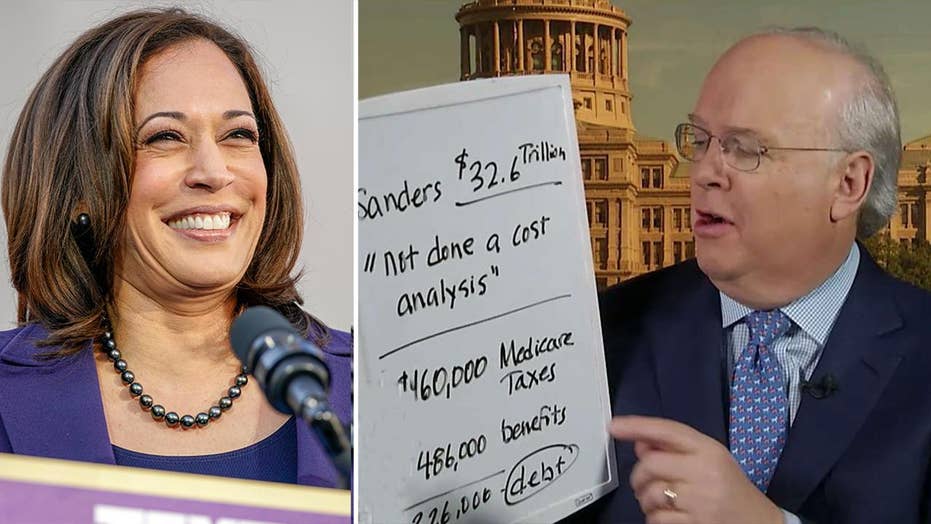 Democratic Senator Kamala Harris kicks off her presidential campaign by touting programs like 'Medicare for all' and universal pre-K; reaction and analysis from Karl Rove, Fox News contributor and former White House deputy chief of staff.

Vermont Sen. Bernie Sanders' "Medicare for All" proposal is coming back in a major way as Democratic presidential hopefuls begin stumping for 2020.

The government-funded health care system — strongly opposed by President Trump and fellow Republicans — would expand benefits beyond what is already offered under former President Barack Obama's Affordable Care Act. The legislation was first introduced in 2016 by Sanders, who said it would be another step toward achieving universal health care.

During a speech to officially launch her 2020 run, Sen. Kamala Harris, D-Calif., declared "health care is a fundamental right" and vowed to serve her constituents by supporting "Medicare for All."

In August 2017, Harris became the first Senate Democrat to support Sanders' "Medicare for All" bill.

“It’s just the right thing to do,” Harris said at the time, according to The Washington Post.

But while Democrats are embracing the plan, critics point to the soaring cost of implementing it — something numerous studies put well into the trillions.

Here's what you need to know.

How much would it cost?

There doesn't seem to be much dispute that a single-payer system would require tax increases, since the government would essentially take over premiums now paid by employers and individuals as it replaces the private health insurance industry. The question is how much.

"Medicare for All" is estimated to cost tens of trillions of dollars over a decade.

Several independent studies have estimated that government spending on health care would increase dramatically, in the range of about $25 trillion to $35 trillion or more over a 10-year period. Specifically, a study released over the summer by the Mercatus Center at George Mason University estimated it would cost $32.6 trillion — $3.26 trillion per year — over 10 years. For comparison, the federal budget proposal for the fiscal year 2019 was $4.4 trillion, the Congressional Budget Office states.

“If every major country on earth can guarantee health care to all, and achieve better health outcomes while spending substantially less per capita than we do, it is absurd for anyone to suggest that the United States cannot do the same,” Sanders replied, arguing on his website that his plan would cost about $1.38 trillion per year. “This grossly misleading and biased report is the Koch brothers’ response to the growing support in our country for a ‘Medicare for all’ program.”

Analysis by The New York Times in 2017 showed at least 74 million Americans who currently benefit from Medicaid would potentially face higher taxes under "Medicare for All."

However, a recent estimate from the Political Economy Research Institute at the University of Massachusetts in Amherst suggests that it could be lower. With significant cost savings, the government would need to raise about $1.1 trillion from new revenue sources in the first year of the new program.

House Budget Committee Chairman John Yarmuth, D-Ky., has asked the Congressional Budget Office for a comprehensive report on single-payer. The CBO is a nonpartisan outfit that analyzes the potential cost and impact of legislation. Its estimate that millions would be made uninsured by Republican bills to repeal the Affordable Care Act was key to the survival of Obama's health care law.

What is "Medicare for All"?

Many Americans still don't know specifics about the grand plan. A recent survey from social research nonprofit NORC at the University of Chicago found almost half of adults say they haven't heard anything about "Medicare for All."

Here's the basic idea: "Medicare for All" is a single-payer health insurance plan that would require all U.S. residents be covered with no copays and deductibles for medical services. The insurance industry would be regulated to play a minor role in the system.

"[Sanders'] plan will cover the entire continuum of health care, from inpatient to outpatient care; preventive to emergency care; primary care to specialty care, including long-term and palliative care; vision, hearing and oral health care; mental health and substance abuse services; as well as prescription medications, medical equipment, supplies, diagnostics and treatments," Sanders' old campaign website explained. "Patients will be able to choose a health care provider without worrying about whether that provider is in-network and will be able to get the care they need without having to read any fine print or trying to figure out how they can afford the out-of-pocket costs."

The phrase "for all" doesn't mean the plan would instantly give every American insurance. It would be slowly extended to citizens — from older to younger — over a period of four years, NPR reports. 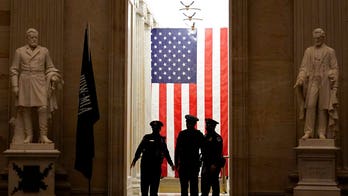 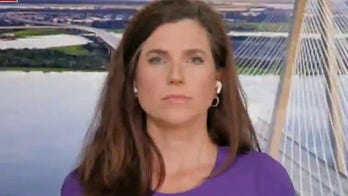