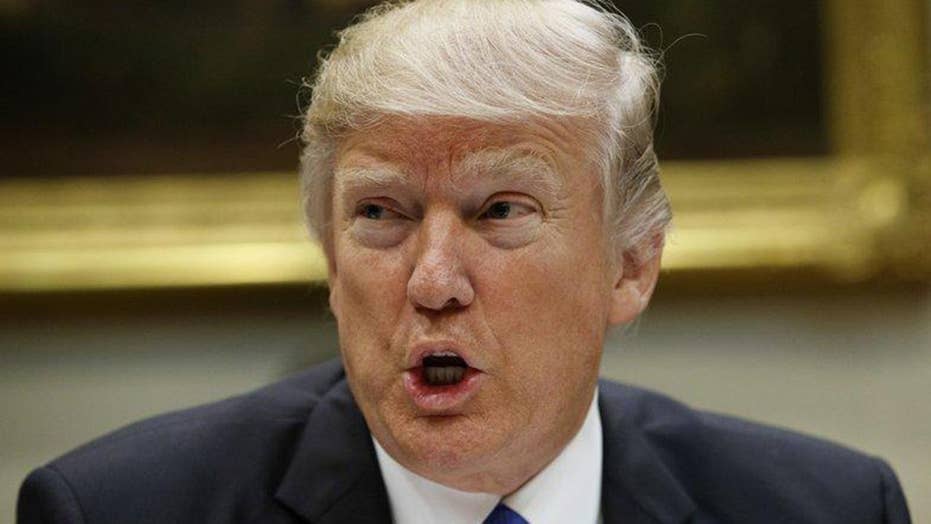 The Department of Homeland Security is urging President Trump to impose a new set of “tough and tailored” rules for foreign travelers to the U.S. ahead of the looming expiration of his controversial travel ban.

The 90-day ban on visitors from six majority-Muslim countries expires this Sunday, putting pressure on Trump to announce a new version -- even as the original policies are being fought out in the courts.

The president is now considering recommendations from Acting Secretary of Homeland Security Elaine Duke, who wants to set screening rules for a broad range of travelers, as well as additional standards for those from certain countries.

The countries were not specified, so it's unclear whether a new version of the travel ban would tighten screening for even more countries.

“Elaine Duke has notified the president of which countries do not meet our standards,” Counselor to the DHS secretary Miles Taylor told reporters Friday, calling the recommendations and new restrictions “tough and tailored.”

Taylor noted that the current “screening and vetting” is “no longer adequate to combat terrorism,” and said terrorists are seeking to “exploit our defenses.”

New baseline requirements were presented to every foreign government in July, according to Taylor. They gave each country a 50-day “engagement period” to comply, or face potential "restrictions."

DHS officials told reporters that the “standards” vary, based in part on the threat level from each country.

“They are tailored and specific to each country—some countries hypothetically may have similar restrictions to others, but there is a spectrum,” an official said.

A DHS official noted there are some countries that need to provide more information than others.

“This is not about taking action to arbitrarily punish foreign governments. Standards are to protect Americans and have security,” a DHS official said.

Trump’s executive order for a 90-day ban on travelers from six majority Muslim countries is set to expire on Sunday. The ban, which prompted a series of protests nationwide and lawsuits against the administration, applied to Iran, Libya, Somalia, Sudan, Syria and Yemen.

The Justice Department told reporters that they will continue to “vigorously defend” the president’s executive order, but would not comment on any ongoing litigation related to the order.

“The Department of Justice is ensuring legal actions with this policy are lawful and will defend them,” said Raj Shah, principal deputy White House press secretary, noting there were no specifics from the Justice Department on how it would defend the new or old policies pending in court.

The Supreme Court is set to begin oral arguments on the ban on Oct. 10, but there was no comment from administration officials on whether the recommended policies would make the current case moot.

Shah told reporters that a presidential proclamation was expected, but did not have a specific day or time, though he did note that affected countries “will be” and “have been” notified in advance.