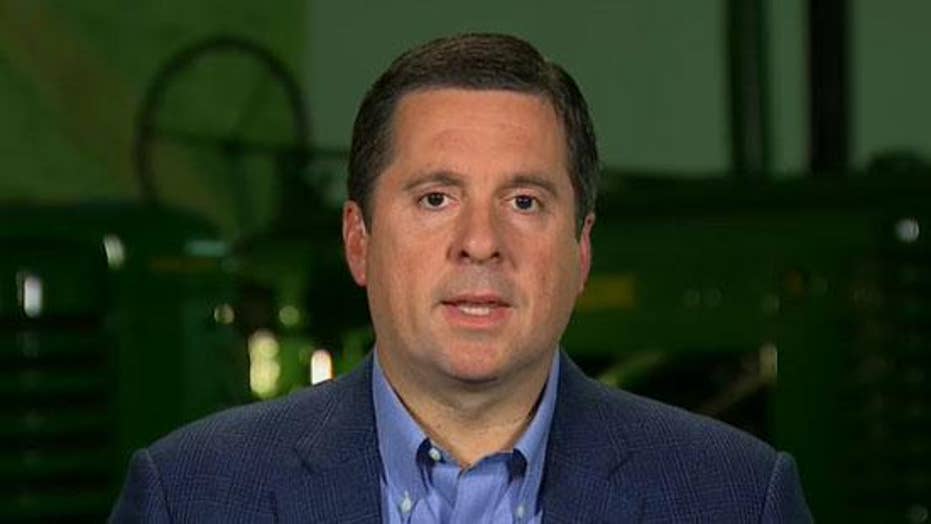 Rep. Devin Nunes, R-Calif., sued CNN for defamation on Tuesday, accusing the cable network of publishing a “demonstrably false hit piece” about him amid his high-profile opposition to the Trump impeachment inquiry.

The 47-page lawsuit, filed in the United States District Court for the Eastern District of Virginia, accuses the liberal network of publishing “numerous egregiously false and defamatory” statements about Nunes on Nov. 22, 2019 when journalist Vicky Ward reported claims that Nunes met with Ukranian prosecutor, Viktor Shokin, in Vienna in 2018 to dig "up dirt" on Hunter and Joe Biden.

Nunes, who has been leading GOP opposition to the House Democratic impeachment inquiry in the House Intelligence Committee, says he “did not go to Vienna or anywhere else in Austria in 2018” and “has never met” Shokin.

“CNN is the mother of fake news. It is the least trusted name. CNN is eroding the fabric of America, proselytizing, sowing distrust and disharmony. It must be held accountable,” the lawsuit, obtained by Fox News, states.

“CNN is the mother of fake news. It is the least trusted name. CNN is eroding the fabric of America, proselytizing, sowing distrust and disharmony. It must be held accountable."

The lawsuit mocks the “trusted” source of CNN’s story, Lev Parnas, a man recently indicted by the U.S. government and charged with multiple federal crimes. The CNN story said Parnas’ attorney told them his client was willing to tell Congress about Nunes’ travels. The suit includes a tweet sent by MSNBC justice and security analyst Matthew Miller, who publicly questioned Parnas’ credibility.

“It was obvious to everyone – including disgraceful CNN – that Parnas was a fraudster and a hustler,” the suit said. “It was obvious that his lies were part of a thinly-veiled attempt to obstruct justice and to trick either the United States Attorney or House Intelligence Committee Chairman, Adam Schiff into offering ‘immunity’ in return for information’ about [Nunes].”

Rep. Devin Nunes of Calif., is seeking at least $435,350,000 from CNN in compensatory and punitive damages. (AP Photo/Susan Walsh)

The suit also named Ward, the reporter who penned the piece in question, and “Cuomo Prime Time” namesake Chris Cuomo, who promoted the article.

“The ulterior purpose of the CNN Article is to advance the impeachment inquiry, to seed doubt in the minds of Americans, and to influence the outcome of the 2020 election,” the lawsuit says.

The suit mocks Cuomo for “having recently threatened to assault a man who referred to him as ‘Fredo,’ who Nunes claims also helped “disseminate the false and defamatory statements at issue in this case as part of a scheme to boost CNN’s ratings and further the House Democrats’ impeachment 'inquiry.'”

“CNN reviewed, approved and ratified the fake news prior to publication,” the lawsuit states. “Prior to November 22, 2019, CNN knew that Parnas and his attorneys or other political operatives were shopping a story to the press that made claims about the Plaintiff, implicating him in efforts to get ‘dirt’ on Joe Biden and his son, Hunter Biden. CNN knew that no other news outlet would touch the salacious story because none of the ‘facts’ provided could be verified.”

The lawsuit indicates that Nunes feels “CNN’s goal was to inflict maximum damage” to his reputation so that he would be removed from the impeachment inquiry against Trump. CNN Worldwide president Jeff Zucker has a longstanding feud with Trump, and the network is often criticized for focus solely on impeachment even at the expense of other important news.

Zucker, who began his career at NBC, rose from researcher all the way to president and CEO of NBC Universal. Along the way, he was responsible for increasing Trump’s fame when he greenlighted “The Apprentice.” The duo has famously feuded since Trump’s foray into politics, with the president attacking the liberal network on a regular basis and accusing CNN of unfair coverage.

“CNN harbors an institutional hatred, extreme bias, spite and ill-will towards Plaintiff, the GOP and President Trump, going back many years."

“CNN harbors an institutional hatred, extreme bias, spite and ill-will towards Plaintiff, the GOP and President Trump, going back many years. CNN is notorious for making false claims about Republicans and publishing fake news that later has to be retracted,” the suit said.

The lawsuit references other high-profile CNN personalities who shared the damning article, including Jake Tapper and Vaughn Sterling, a senior broadcast producer for the network.

“The breadth of CNN’s publication is staggering,” the suit says. “CNN acted with actual malice and reckless disregard for the truth.”

The suit continues: “The CNN Article was nothing less than opposition research. CNN rushed to get the story out in order to blunt the disastrous spectacle of the House Democrats’ impeachment inquiry, and to hurt the leader of the Republican opposition. CNN misrepresented facts and oversimplified issues in promoting the fake news story.”

Nunes promised to take legal action last month on "Sunday Morning Futures," saying the only way to hold the "corrupt" media accountable is to challenge them in federal court. He told host Maria Bartiromo it was inappropriate for a news organization to take the word of someone who is attempting to smear a congressman, while still under federal indictment.

"It is not OK to work with someone who has been indicted on [a] serious federal crime, to build a media narrative and dirty up a member of Congress," he said. "You’ve seen it, the American people have seen it over the last three years. We out them, and then they come out with a media narrative to try to dirty up the people who are doing the work on behalf of the American people.